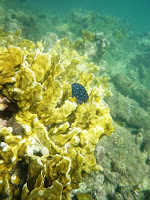 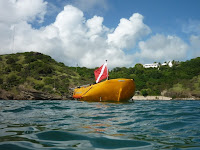 [Kyle]Since someone can only be expected to live in one place for so long, and since we'd already been in English Harbour for a week, we decided a little change in scenery was in order. Our first stop (2 nights and one full day) was a little harbour about 2 miles east: Indian Creek.

Unlike the hustle and bustle of English Harbour, Indian Creek (apart from us, and the goats on the surrounding hills) was completely deserted; we had the whole anchorage to ourselves. Like English Harbour it is surrounded on all sides by high, green hills. It was reported to be very tricky and difficult to get into and shallow once inside, so we felt our way in carefully and were rewarded with all the solitude you could need.

We arrived late afternoon (after numerous errands in English Harbour), and the first evening we were able to lay on deck and enjoy the stars for at least half an hour before we retired with exhaustion (mostly we sleep when it's dark). The next day, fully rested, we cracked open my new snorkel gear for the first time and took the dingy to one of the reefs by the entrance where we spent a few hours simply enjoying the different corals and fish. This was the first time we had used the Portland Pudgy as a snorkel platform, which worked well, although we were not graceful when climbing back in and I have a few new scars to prove it. After snorkeling we took the dingy high into the creek, into the mangroves, out of sight of Footprint. It was beautiful, but as soon as we were out of the sunlight and in the shade we were besieged by "teefs" (Flying teeth, or no-see-ums, or sand flies!); the discomfort was immediate and unbearable, so we found ourselves performing an emergency evacuation back into the sunlight. Lesson learned! Shade BAD!
Posted by SV-Footprint at 6:34:00 PM

Hi Maryanne/Kyle:
Great to hear from you again. I was wondering if you two had "gone native." It is wonderful to see you having such a great time. You folks REALLY know how to enjoy a location. I loved the Donkey as I do all animals. Donkeys and Mules have not been accorded their deserved respect in the development of civilization. However; I thought it was ASS-ININE that no cabs were available. Best wishes and take care.
Bob (Nova Scotia)

I have been waiting about 5 years or so to see underwater pics from you. That means Maryanne, at least, is back in the water and where you are snorkeling, can diving really be that far behind? Yeah!

Kyle seems to attract all the local beasties that bite and sting. What a lucky guy...hmmm. Sorry Kyle.