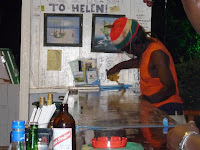 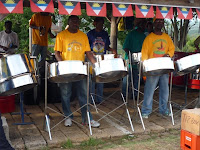 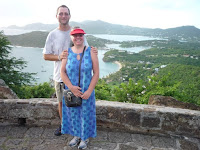 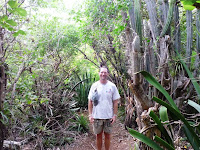 [Kyle]For today’s excursion, Maryanne and I slept in a bit so that we would be able to stay up late partying at what is pretty much billed as THE thing to do on the Southern end of the island: Sunday night at Shirley Heights.
Shirley Heights is on a high hill just to the East of English Harbour. During the British Navy’s occupation of English Harbour, it was used as a strategic lookout and gun location opposite the harbor entrance from Fort Berkeley, much lower down. Now it is occupied by the ruins of those structures plus some covered picnic tables, a bar and a big patio used as a barbecue area, all with sweeping views of pretty much the entire country.

We (That’s the Royal ‘we’) rowed to the dinghy dock on Galleon Beach at Freeman Bay (The Cheap Bastards Guide to Antigua that lives in my head and has yet to be written says it’s a good way to avoid the $5 cab ride). We climbed the steep ½ mile trail from the beach to Shirley Heights, occasionally popping out of the dense forest for an ever expanding view of the local area.

Antigua has very strange forests. They are very green and the undergrowth is very thick, which is to be expected in a tropical rainforest, but almost all the flora is of the dry climate variety. It looks as if someone took all of the plants from a square mile of Arizona desert and replanted them on an acre. Since there’s so much moisture, these plants are all huge, particularly the Aloe Vera and many of them are hosts to various giant bromeliads (air plants). It’s a bit schizophrenic but very pretty.

Anyway, the appeal of Shirley Heights on Sunday (and to a lesser degree, Thursday as well) is that they have live music.

We arrived via the footpath just as AMP Halcyon, who aptly call themselves a steel orchestra, were starting to play. They have two or three members playing traditional western instruments but the bulk of the large group were each playing huge sets of steel drums.

Since things were obviously not yet in full swing and we weren’t hungry yet, Maryanne and I went for a walk around the ruins and along the cliffs to take some pictures.

By the time we returned about thirty minutes later, the parking lot was filling up fast with mini buses. The main area was shoulder to shoulder with tourists shouting loudly at one another to be heard over each other and the music. It reminded me if an over crowded bar on a Saturday night. There was virtually no hope of getting to the edge for a view. It seemed that every tourist on the island was here. We bought some food and managed to wedge ourselves onto a corner of one of the tables long enough to eat it but by the time we were through, the place had become even more crowded. We decided we couldn’t take it any more and headed back down the footpath, rushing to get to the bottom before it got too dark to see (our original plan was to get a cab back). There was a nice open air bar on the beach that had maybe half a dozen people enjoying the view. The acoustics of the Harbour are such that we could still hear the music well and we had a nice relaxing drink with some very nice cruisers who gave us some good tips on how to avoid ‘tourist prices’.

On the way back in the dinghy, we stopped on the other side of the harbor at Nelson’s to dump our trash and have another drink at the Galley Bar – the place that served us that horrible food the first day. We figured that if we didn’t eat and stuck to rum, it would be okay. It was such a beautiful warm evening. The Dockyard was deserted except for a nice cruising couple and a couple of locals having a drink at the bar, one of them varnishing one end of the bar.

Oh, what fun we had! The poor guy doing the varnish, a rasta man called Flute, had all of us sailors standing over him watching him varnish while interjecting our own varnishing experience. We all agreed that he did a very nice job. “The trick,” He said in a thick West Indian accent, “is five rum punch, maybe ten rum punch!” (are you listening, JD?) It broke the ice, though and after the other cruisers left, we had a good time talking to the Antiguans about pretty much everything. We finally felt like we had started experiencing the culture and the people we had come so far to see and feel like we have made some new friends. One of the things we were proud to learn was that on November 5th, the Antiguan government renamed Boggy Peak, the highest point in the country, Obama Peak.

After staying up as late as we could, we headed back to Footprint feeling good. We were almost the last out of the bar. Just as I was falling asleep, I looked at my watch. Only 8:30!! Man, are we a couple of geezers.
Posted by SV-Footprint at 12:11:00 PM

Well, it's about time you two found someone who will do more than grunt at you in passing. The Shirley Heights outing sounds wonderful. What happened to old Gerry Geezer, Kyle? You sound positively giddy with the clean air, beautiful scenery and, of course, the intoxication of the successful journey there. NOW I feel good about you being there. And for God sake, don't forget the words for your Cheap Bastard's Guide to Antigua--paraphrasing here.
It's wonderful that they have named their peak Obama peak. In the US, sadly, the losing half of the population is spewing hate and mayhem. Gun sales have skyrocketed. Obama has had a huge spike in death threats and there are a lot of really ugly things going on. The rest of us are, naturally, intoxicated with our own feeling of success and hopeful expectations, but there is a dark side in that it seems all the people who have lost all their teeth by the age of 35 are intent on getting rid of the terrorist they have been led to believe Obama truly is. (Thank you, Sarah Palin and John McCain.) One might not expect us to be fighting a new round of racism in this country after this historic election, but there it is. Sigh.

What is the food like there? I love seeing a new post and photos from you--am at a total loss for anything clever to write most of the time, but just want to "touch" you both in some way. Take care of each other.

FUN! Another wonderful day for you. I love that they renamed the peak after Obama! In fact, I love that the rest of the world has joined us in breathing a big sigh of relief over his being elected. Carla has a point, of course. There are plenty of crazies trying to ruin it. But I plan to keep on smilin', and nerts to them! The United States WILL persevere, we will come out of our economic crisis by making some sacrifices (no, really? what's that, asked every citizen under the age of 50) and making some hard but necessary choices. And by God, in 4 years time, there will be ample evidence that the majority who spoke in November 2008 knew exactly what they were doing! It is hard not having you guys around for this momentous occasion in our history, but I know you'll meet lots and lots of people on your travels who give you the ol' high-5 for having sense enough to vote for obama. sigh... that's a truly fan-damn-tastic feeling.