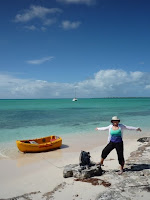 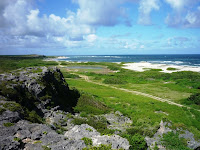 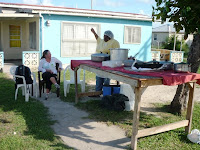 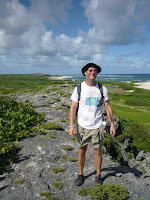 [Kyle]Our original "plan" once arriving in Barbuda was to take a tour of the Island given by one of the locals to the various "must sees" of the island. We tried contact via VHF and even satellite phone, but were unable to make contact. Maryanne (not me, Maryanne), looked at the map and, apparently not realizing that it was a scaled representation of the whole island, came up with the idea to WALK to Codrington (the only town on the island), a distance of about 8 miles the short way, but when I measured it out, 14 miles the long scenic way that she had chosen. The scenic route would allow us to see many of the sights on our own (no need for a full day tour, just a cab ride back).

Armed with an entire survival kit (food, drinks, GPS, VHF radio, map, etc) we rode the dingy to the beach. Ahh the beach! The sand here is pink, actually it is white sand with little flecks of red sand, making it look pink, AND it is as soft as talcum powder. We had the whole thing to ourselves. BUT we had to get going. We headed for the "road" which the chart actually calls "a road of sorts", and set off across the uninhabited eastern side of the Island. Of course we didn't leave until mid-day (just to make it more of an adventure, with the hot sun broiling us). It is difficult to appreciate by looking at the map just how remote and uninhabited the island is. There was NOTHING out there. That "road" was a rock and dirt track that would be suicidal to drive on at more than 5mph. On each side were low shrubs (no good for shade).

After several miles our road petered out, so we went overland to the beach and followed it north. There was another completely deserted pink beach that went on for miles and miles, lapped by turquoise blue water. After a couple of miles of this, we were tired of walking either on a slope or on very soft sand, so we managed to bush-whack our way through what must have been a goat trail to a "road" which was at least easier going. We walked and walked and even though we were well hydrated and fed, the rough terrain was starting to wear us out. The road was supposed to end in a couple of miles and we would need to traverse 4 miles of beach before the next road. As we came to the end, we arrived at Castle Hill. Because of the way the road runs, this is the most remote place on the island, furthest from Codrington. We were pleased to see a couple of locals also enjoying the area. We talked for a bit, and they directed us to a path to climb Castle hill (a small cliff), where we had expansive views of almost the entire island, including the place we were initially headed for - looking very far away. Back at the base of the cliff, Maryanne managed to negotiate a ride into Codrington in the back seat of their truck.

On the ride to Codrington we discovered our ride was the daughter of the guide we had been trying to reach the previous day; what a lucky break. They drove us to the guide (George's) house where he seemed surprised to have new business, but he found us some local food, acted as our return cab to the boat, and promised us a tour of the remainder of the island sights the following day. George was more taciturn than we would have expected a tour guide to be, and it took us nearly the entire ride back to the boat to extract a price from him. He wanted us to to move the boat to the other side of the island to make it easier on his truck to collect us the following day; Kyle wasn't having any of it, and he seemed pretty anxious not to drive on these remote roads again (they would shake any vehicle to death in short order). Eventually we compromised - We didn't move the boat, but just walked to the agreed rendezvous.

We cooled down with some more snorkeling of the adjacent reefs and retired early ready for a long day ahead of us.

[Maryanne]Kyle's title comes from the song "Mad dogs and English men, out in the mid day sun". However we only got such a late start since Kyle wouldn't budge in the morning! AND my epic walk was really only a plan to walk until we could get a decent VHF signal... But OK, let Kyle have his fun.
Posted by SV-Footprint at 7:38:00 PM

I don't know...I'm feeling like a pretty proud Mom (Mum) right about now. Your life is better than my life and you both deserve it! I miss you though.