[Kyle] Having had a day of brisk tourism, we set out to find a place to buy a sim card for our phone (not open weekends) and orient ourselves further. We walked the half mile to Falmouth Harbor to the main shopping area and were amazed to find real stores with actual stuff. The grocery store was well stocked and reasonably priced, as was a bookstore upstairs. There were a couple of cafes with tables spilling out on the deck full of people on laptops having conversations with each other. We bought a couple of delicious Rotis (a nice portable Indian dish) from a woman selling them out of a basket in front of the store for something like four bucks each. Walking back, we were trying to be inconspicuous while perusing the drink menu through a window of a local bar when we were spotted by Zola, The Jamaican barmaid who insisted that we come in, sweeping us in her arms like old friends. Contrary to what Maryanne has been saying, I had not managed to have any actual rum since we've been here. I almost did yesterday. When we sat at what turned out to be an unacceptably snooty restaurant (well, now we know), Maryanne ordered a rum and a beer and then handed me the beer! Back to today. It turns out that rum here is cheaper than beer and I finally got to try a couple of different things for practically nuttin'. Now that's more like it! We had a couple of games of fooseball (bar football) and pool and returned to English Harbour in good cheer. We had a nice amble around the museum and grounds right after the cruise ship people left on their buses.

Shops were all starting to close and the place was shutting down, but it was still early, so I set up the sailing rig on the dinghy and thought we'd go sailing around the harbor. Maryanne said she was tired and didn't want to risk too much sun, so I dropped her off at the boat for a nap and went a-dinghyin'.

Since the harbor is so well protected from the tradewinds by the high hills, the winds at water level are very swirly and with all of the moored boats, it makes for some very challenging dinghy sailing that was a lot of fun. I eventually made my way into Freeman Bay just inside the entrance to English Harbour and landed on a nice, white beach shaded by palms under lush, green hills for a walk around and to take some pictures.

I had been tacking back and forth in the shifting winds for the better part of an hour trying to make it past the boats to the beach, which was directly upwind. I would think I was going to clear a boat, and then the wind would shift and I'd have to tack. Then it would die and shift again so I would have to tack back. It was a real struggle to get to that beach. Meanwhile, I was providing the entertainment for the people on the boats and the few on the beach. Often, I would spend several minutes and several attempts getting past a boat. My hands were full, with one on the tiller and the other on the mainsheet but every time I got within hailing distance, I would make a point of giving a nod and saying hello or good afternoon. In every instance except one, this was met with a cold, blank, Deliverance-like stare from the occupants. Up until now, the sight of someone sailing around the harbor in a distinctive orange dinghy with a distinctive orange sail tended to bring people out to their rails to ask what kind of boat it is or say that it looked like a lot of fun or just to say hi. Here - nuttin', just the stare.

I landed on the beach and walked to the other end towards a trail leading into the trees. On the way, I passed a few of the tourists who had been watching me. As I went by, I would smile and say hello. One woman completely ignored me and went about composing a text message. A couple at the far end, who had been watching me with great interest half an hour before, returned my hello by silently turning over onto their fronts to tan the other half.

I scrambled through the forest to another small beach. There were two guys launching a dinghy into the surf who gave me a brief glance of recognition. I waved and said hello. They climbed into their dinghy and sped off without any further acknowledgement of my presence. I was starting to feel like a cop in a land of fugitives.

Still, I don't get it. After Maryanne and I arrived, I was so glad to finally be in this beautiful place that I wanted to go around saying hi to everybody. Even considering that the land tourists came by a short plane ride and that most of the boats probably made much shorter sails from a nearby island, the beauty of the place seems incongruous with such anti-social behavior. I get up in the morning and breathe in the unpolluted air and look at the lush, green hills and think "Aaahhh! This is nice." I want to smile and wave at everybody.

I suppose this could be a cultural misunderstanding. Most of the boats here have British ex-pats on them or other Europeans to whom I may seem much too forward as the American going around saying 'hi'. But the British I know in Britain are some of the loveliest, most polite people I have ever met (I even married one of them).

Maryanne said the locals here are indifferent. I disagree. All of our guidebooks say that West Indians don't smile out of politeness or courtesy, only if something is funny. I get a feeling that there is a long-standing tradition, sad as it may be, not to bother tourists unless they address you first or to engage in frivolous conversation. Nevertheless, almost every time we have come within earshot of West Indians, they will say good morning, good afternoon or hello. The etiquette around here is that you don't go into a store and just start ordering things without first exchanging pleasantries or thanking and wishing a good day on the way out.

Perhaps most of the boaters have been here so long that they all know each other and thus know that we're new. Rather than welcoming us as fellow travellers, they have been here long enough to feel like a tribe that is threatened by newcomers, so we get treated like the new kid in class. Whatever. They're jerks. [Maryanne] One guy so far, John, on a large motor yacht, has been helpful - for John we are grateful!

[Kyle] So... Maryanne and I, in a unilateral attempt to change the status quo, have decided to start saying a friendly 'hello' to everyone we meet (wear them down!), as is West Indian custom.

Which brings us back to the title of today's rant. "You drop someting?" is an Antiguan saying that translates to "Excuse me, you seem to have forgotten to say hello." I think it's derived from the 'ting' you dropped being your manners.

Anyway, enjoy some nice pictures from my excursion. 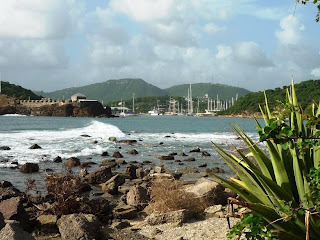 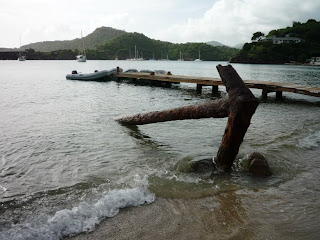 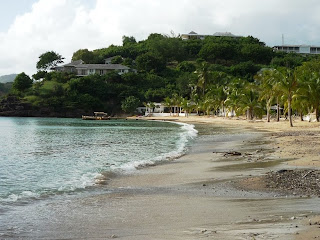 gorgeous! beautiful! wish you were here! but about the people(ex-pats, tourists and others with tightly-wedged sticks up their asses): i agree with your proposed strategy. keep smiling and saying hello, because that's who you guys are. if they can't return the favor, it's their loss. who in the world watches someone tack back and forth like that, reach the beach finally, and then behave in such a boorish manner when you say hello? very, very rude. maybe you should order an obama t-shirt to wear around? you could offer the name of a reputable surgeon who can remove said stick from ass? ah well - thanks for those photos... i can almost hear the lapping of the waves and feel the sun's warmth. almost.