[Maryanne]Lying in bed trying to decide if we really wanted to get up this early or not, we heard a knock on the hull and someone calling "Footprint". I called out a "just a minute" and hastily dressed and rushed out to the cockpit, where I found the Marine Park attendant collecting his mooring fees. He was very nice and explained he starts early as so many people try to leave without paying, he also directed us to a closer mooring which would reduce our rowing effort. Oh well, now we were up we decided to get started with our day of sightseeing.

My main goal for the day was to climb the Quill, which to be honest I'd thought of before I'd seen how big and steep it looked. Nevertheless, I'd already decided, so off we went. We rowed ashore, cleared customs (very little paperwork or interest), and then on to the Park Authority store (excellent book swap, information, internet connection, maps, and friendly help) to collect our hiking permit tags and a great trail map. The volcano has not erupted for 1700 years (around 400 AD), officially its name is Mount Mazinga, but everyone knows it as the Quill (after the Dutch kuil, meaning 'pit').

The very very first part of the journey took us on a steep trail with switchbacks from the lower level (old town) up to the main town atop a cliff a few hundred feet above sea level. Once at the top of the cliff, we followed the well marked route to the foot of the Quill; a steep shadeless trek through the outskirts of town, which we trudged up, still a little sore from our Nevis adventures. I was beginning to doubt this was a good idea, and the mountain didn't seem to be getting any closer, but really, what else did we have to do?

Once we got onto the trail proper we started to find shade, and spotted various animals along the way - notably more soldier crabs and the local red-bellied racer snake (although we were really looking out for the rare Antillean Iguana). Maryanne tried to gently move a branch out of the way so as to make for a better photo of one snake in particular I was trying to photograph. It startled and headed straight at her. She tried jumping out of the way, which started one of those hilarious scenes where you try and pass someone in a hallway and keep getting in each others path. Eventually they were both able to escape without harm to each other (although my sides hurt from laughing). After reading this my mother, who says there is no such thing as a harmless snake if it can cause a heart attack, can be pretty much assured of never visiting Statia. 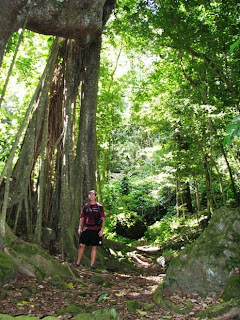 There were several (well marked) trails on the mountain, but the rangers had suggested to us the Quill trail to get to the rim, and then the crater trail that went down into the crater and the panorama point trail for the rim view (to do any more we should have started earlier or would have to go back another day).

As we neared the rim of the crater, the trail steepened The park service had done an great job with the trails; excellent signage, good markings and borders along the well graded trail - so you knew how difficult it might be, and even included ropes in the steeper areas - and boy we needed them in places. We had a brief rest at the crater rim and then went into the volcano on the crater trail. The bottom of the crater being almost half the distance back to sea level from the rim. The trail down into the volcano started out very steep; first with actual stairs, then transitioning into steep, hard-going rocky areas where we made use of the fixed ropes to descend safely. Already fairly tired, we were wondering about the effort to get back out, but we wanted to see the bottom and so we carried on. Since the trail was so steep it didn't take that much distance to start leveling off near the bottom. 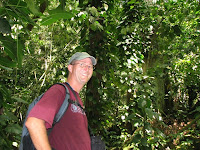 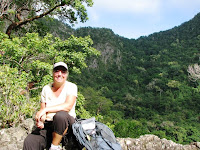 The ecosystem inside was rich and vibrant, having been untouched we assume since the volcano began its dormancy. There were huge old growth trees everywhere, most notably the Giant Cotton Silk Tree (Kapok tree - Ceiba pentandra), but also gum trees and wild bananas, and many we could not name. At the crater floor, the trail turns into a loop, passing some interesting rock formations as well as lots of lush jungle style vegetation. We knew we were the first to hike the trail for at least a few days as the trail was crisscrossed with substantial cobwebs.

Once done with the crater loop, we found ourselves staring up from the base of the rope trail leading out of the crater. It was a long slog back up, and we quickly forgot to look for wildlife while we were busy watching the placement our hands and feet and avoiding snakes. After another rest at the rim (complete with more drinks and a snack), we headed up the almost equally steep Panorama Point Trail. Where there were no ropes. We pulled ourselves up with tree roots and trunks. Eventually, we made it to the top, which had great views of the rim and descending cliffs surrounding the crater as well as the island of Saba in the distance. The viewpoint was also shared by a red aeronautical beacon and its associated footprint.

On the way back down we laughed about how all the lower parts of the trail, which had seemed so steep on the way up, now seemed so gentle compared to the steeper slopes we found later.

Once back in town we took a quick look around, stopping especially to take pictures of Fort Baai, the old church, and the cliff walls. We were mostly stalling for time before visiting the Kings Well Resort restaurant for dinner. Kings Well was reported in our cruising guide to contain two things I really liked: food and parrots! When we got there, the sign outside said they would not be open for an hour more. We sat outside the gate dejectedly for about 15 minutes before remembering our guide said the bar was always open on an honor system basis - help yourselves and don't forget to pay! When we entered the bar, and the balcony overlooking the bay, we found Laura feeding the parrots (they have at least 6 macaws). Laura treated us like family (at least she seemed not to know were weren't related); she welcomed us, sat us down at her table, offered us a drink, and told us of course we were more than welcome to stay for dinner (even though the sign outside said reservations only). 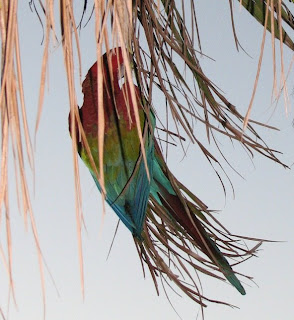 Ivan the Macaw hangs out by the Kings Well restaurant balcony

We sat watching the parrots eat and play, enjoying our drinks as Win and Laura (the owners) told us stories about how they'd met in their pre-island lives, eventually moved to Statia, and built their resort themselves. The two parrots we were sat at the table with were free flighted outdoor birds and would alternate between digging through their dish for food and flying back and forth along the beach in formation. Once the sun set the parrots went "to bed" and the food arrived. Win is an excellent chef, with German dishes and seafood options on the menu (although he gave the impression he'd make anything we wanted). Other guests had canceled, so the 4 of us sat together enjoying stories for the evening, listening to the surf and enjoying the animals. Laura and Win had also at one time owned a catamaran, but had lost it to a bad mooring, and it smashed into the Statia cliffs. After dinner we could not decide on a cocktail, so Laura asked what kind of things we like and went on to invent a new one for us - and named it Footprint: Kahlua, Brandy, Chocolate sauce, vanilla ice cream, whipped cream, and ice - all in the blender - delicious. Oh and there is no measuring in the Caribbean just a good slug of alcohol!

Overall we had a wonderful evening spent with warm and wonderful people (and their pets). This small and personal resort offers hotel rooms for any cruiser looking for a change of scenery, and also long term studio and small apartments - perfectly geared for a retirement life, or even a writer's get-away.

As we finally left for the evening, Laura invited us to use their pool the next day if we were interested - a nice fresh water swim! We were positive we'd be back.
Posted by SV-Footprint at 12:10:00 PM

Can't help but repeat the word idyllic over and over. Except for the snakes. You're right about the deadly snakes, but I also like one kind of snake--flat snakes. I like flat snakes. And it's too bad I won't ever be visiting such a wonderful, friendly and beautiful place. You can take my ashes there if you like...