To the Caledonian Canal

[Kyle]Our day started very early when, at 1am, Maryanne heard a disturbing scraping noise coming from the back of the boat. We both lay there in silence waiting to see if it returned. Then there came another scrape. It sounded like we were dragging. Suddenly, we were both wide awake and leaping out of our warm, cozy bed. The tide was very low and the wind had picked up. This caused the mooring chain to lie at a slant and with less sag, allowing our rudders to just reach the bottom at the edge of our swing. I swung the rudders up but then they were swinging distressingly too close to the rocks on shore, less than three feet away. We needed to move.

I got the engine going and Maryanne went forward to release the bridle lines. It was raining now and it was cooold! I couldn’t back away from the mooring because I was afraid I didn’t have the space. Maryanne was on the opposite corner of the boat in the pitch darkness and I couldn’t see or hear what she was doing. Eventually, she yelled to me that we were clear and to go forward and starboard. We located the other mooring from two days earlier that had more clearance and secured ourselves to that one. I don’t think we actually dragged the mooring. We had been through two previous low tides without incident and although we were close to shore, we had remained at a safe depth. The difference this time was probably that the wind caused a slightly different direction of pull. That and the length of Footprint plus the bridle was probably a bit too much for the circle. Had we been in a monohull and secured the bridle by cleating the pendant on deck directly, we would have been fine. We only took the second mooring because the guy who suggested it said he thought the owner of the first would need it that day, which he ended up not doing. We were back in bed half an hour after the whole thing started but it took us a while to fall back to sleep.

Several hours later, we got up in earnest. The beautiful weather of the last couple days had given way to a much more Scottish cold rain that made neither one of us want to go anywhere. Well, of course, we did anyway. The good thing was that there was about 15 knots of wind blowing, so we would be able to get the sails up and drawing. We had a nice fast reach up Loch Linnhe in weather that alternated between beautiful sunshine and cold rain.

Loch Linnhe
In planning for a nice slow sail, it became necessary to leave against the last of the ebb current so we would have the flood going with us most of the way. At a place called Corran Narrows, we managed 7 ½ knots through the water with 1.9 knots ground speed. There was a cable ferry ahead of us that we kept worrying about a conflict with, but they ended up doing three round trips by the time we got to a wider part of the loch with slower current and shot out of their way.

Corran Narrows and the cable ferry
We arrived at the sea lock at Corpach two hours earlier than planned right at the low tide and were told we would have to wait for two hours before the water would be high enough for us to lock through. We did a bit of tidying and had a brief look around but stuck close to Footprint as we wanted to be close by to adjust lines for the tidal change. The lockkeeper told us she would call us on the radio when they were ready. 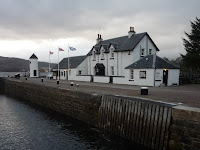 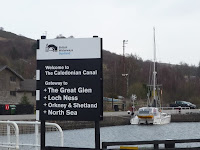 Footprint arrived at the Caledonian Canal
They didn’t call. They just came over. No problem, but I was totally unprepared. I was lying in the bed in my foul weather gear reading a book. When they showed up and I ended up running around to get the drive leg down and the batteries to start, Maryanne got an earful about how long I was taking and how I must have been watching telly. Jees, five minutes warning is all I asked!

We locked up uneventfully except one of the lockkeeper’s assistants dropped his end of the stern line he was holding, causing Maryanne to have to quickly cleat one of ours and heave it to him. That and a little well-placed reverse kept us from going crunch. Once through, we were walking Footprint down the wall in the basin at the top of the lock. The wind was behind us and she was slowly accelerating. I took the stern line and turned it around a mooring hook to check her way, which seemed to work well until the line slipped over the horn of the cleat and came loose. Maryanne had already secured the bow and we were rapidly approaching a perpendicular sea wall. Once again, Maryanne saved the day. Maryanne rushed to the stern, I heaved her the line and she got it cleated the first time – just in time for Footprint to come to a gentle stop on her fenders just inches short of the wall. Kids, there’s a reason you want to be able to cleat a line in a third of a second without having to look and that is it. Well done, Maryanne!

After that, we took a nice calming (and freezing) walk along the canal for a bit to bring our nerves down and see what’s ahead.
Posted by SV-Footprint at 8:34:00 AM

Okay, so now I'm having one of those flashback moments. We visited that loch and I recognize the buildings. Seeing you there in the water, going through the loch is just weird.

Kyle, you're the luckiest man alive, you know that?