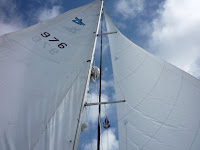 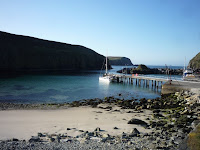 Footprint gets to sail to yet another beautiful new harbour
[Kyle]We had a bit of a lie in and then set off to explore the island. We started by taking the road (actually, there are two) to the lighthouse on the southern side of the island that passed the day before as we sailed in. It was very hard to keep focused along the way because of the spectacular views everywhere we went. The island is gorgeous, and it has cast a spell on me, it is probably my favourite place so far (after Bermuda). Back when I learned to sail on Lake Erie I never even imagined that I would ever someday sail to such a wild and remote place.

Fair Isle seems to have been formed in reverse. The middle of the island is a smooth, grassy bowl with the hills climbing more and more steeply until their abrupt end as high sea cliffs. There are long, narrow inlets everywhere cutting deeply inland, called geos that provided not only spectacular views but also a huge surface for cliff nesting birds as well as grazing for the occasional super-brave sheep. The layers of dirt at the top were riddled with rabbit warrens, some of which had been taken over by Puffins as nesting sites.

Even though the island is only 1 ½ by 2 miles, we covered a lot of distance along the much longer cliff edges and geo rims. This also involved a lot of climbing up to a viewpoint and then back down to get to the next arm of land.

The animals here seem relatively unafraid of humans and, with the exception of Puffins, would allow us to approach pretty closely without fleeing. Several of the island’s sheep and lambs even came running over to us excitedly before apparently realizing we were strangers and wandering off in no real hurry. Although the local skuas did dive bomb us as we (presumably) passed too close to their nest.

[Maryanne]The island is owned by the National Trust (gifted from the previous private owner). The south of the island is given over to crofters. Crofting holds special protective rights; after the atrocities of the clearances, once landlords later tried to clear crofters from their lands there was a revolt followed by a political change that protected crofters and their way of life. For the last 20 years or so the population of Fair Isle has held around 70, and that includes young children who may well continue the way of life. Many locals also supplement their income with crafts (boat building, knitting, spinning and chair making). There are few opportunities for other work, but a local ferry, the post office, school, road repair, coast guard and fire service all provide other part-time employment for the locals. On the North of the Island the replacement Bird Observatory center is currently under construction (on the site of the old center) and will continue to provide accommodation for visitors and volunteers to the island. On our walk we found plenty of capture pens, used to collect the birds for measurements and ringing before release again.

As we’ve mentioned before the biggest draw for tourists to the islands is the bird populations. Kyle and I are hardly expert ornithologists, but it is an easy place to learn quickly. The cliffs are full of sea birds, and we swiftly have begun to recognize the owners of any particular ledge before we even see the birds. The guillemots in particular huddle together, backs to the wind, chest to the wall, on a ledge covered with guano, looking totally miserable while just a few feet away (typically) a pair of fulmars sit comfortably on a clean patch of grass, leisurely looking out to sea and enjoying the sun shine. 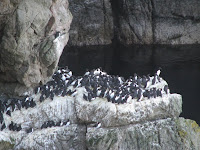 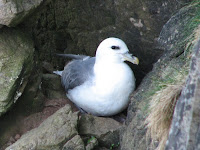 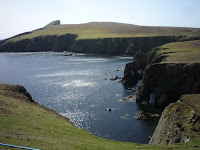 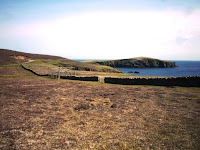 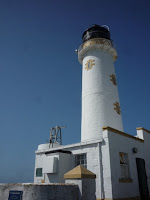 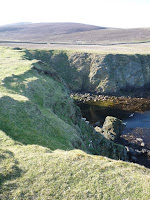 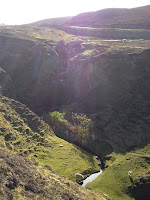 I have never heard of crofting or crofters before. Learning as you go, and all I have to do is make a fresh latte and sit back to read. The scenery is spectacular and only the two of you able to make the best of it with the camera and words. I see you are having fair weather too. 'Bout time.