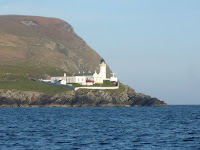 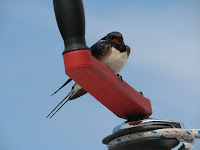 Hitch-hiker on our way North on way to Shetland Mainland

Passing around 60 degrees North
[Kyle]We reluctantly left Fair Isle for Shetland the next morning. The wind started out as a brisk beat to weather on a port tack in sloppy seas. As the day wore on, the wind clocked around and died off until we were eventually ghosting into Lerwick harbor going dead downwind at only a couple knots. As we sailed up the east coast of the Shetland mainland, we passed a big milestone; 60 degrees north. That put us 2635 nautical miles north of the latitude of our southernmost point so far, Jacques Cousteau National Park in Guadeloupe.

Lerwick was pretty full when we arrived and we had to raft up to another boat to get ashore. We found two boats we had met in Fair Isle plus the Australians we had berthed next to in Wick. Perhaps a big reunion is in order, but for now, it’s been a long day so we’re off to sleep in the twilight of the short northern night.
Posted by SV-Footprint at 4:28:00 PM

As a gigantic oil spill destroys the Gulf Coast, Florida and possibly even the Eastern Seaboard, it does my heart good to know there are still places we haven't completely mucked up (yet). Yeah, it feels pretty darned good. Maybe we can save some of this planet after all, as long as we stay away. Sleep well, dear sailors!

OK, I think I've finally got access to send you an email...whew. You guys are amazing and I love reading your narratives, you are both wonderful writers. I'm interested in the burial mounds, can you take photos inside of them? Who built them originally? Also, I'd like to see a picture of your galley and sleeping quarters...just so I can relate. I'm 'on' this trip with you, you know. It's the only way I'll ever get there!

Love to you both, Aunt Linda :)

Hi Carla! Actually Shetland has had 2 significant oil spill disasters (Braer and Bernicia), and the community took charged and imposed restrictions on shipping traffic and the oil industry to try and protect them from future issues. So successful is the "Shetland Model" apparently that they were advisers to the Alaskan communities affected by the Exxon Valdez spill.

A. Linda (Squawbush). CONGRATULATIONS on your successful post. We don't have any great pictures of the inside of the boat (would need a much better wide angle lens than we have) but you can find internal pictures on the manufacturer's (Performance Cruising) web site - see http://www.performancecruising.com/gemini105mc/accommodations