[Kyle]After a week or so, I was beginning to feel pretty at home in Wick. With not very much to do, Maryanne and I were able to space out Wick’s few attractions into a nice, leisurely schedule. Our days would usually consist of a morning run in the pretty countryside, followed by our “one thing” for the day. By the time I left for work at the end of the week, we were able to get around and give directions without the need for a map. Maryanne even briefly acted as de-facto harbour master for a late arriving boat, doing her best to match Malcolm’s kindness and helpfulness.

That was how it was supposed to work. The whole thing came crashing down on me when Maryanne called and woke me up at 11:23pm to tell me she had just received an email saying my flight to Newark was cancelled. I had a suspicion what the cause was: Eyjafjall, the volcano in Iceland (commonly referred to as Eyjafjallajokull, the jokull part actually refers to the glacier on top of the volcano, not the volcano itself). Some more checking revealed that all flights to and from Ireland, Scotland and the northern half of England were cancelled as well.

Maryanne found me an express train that would get me to Heathrow with 30 minutes to go before the last flight out. I managed to find – and buy – the last ticket on BMI airlines that would get me there a couple of hours before that. The last flight from Heathrow to Newark had over a hundred empty seats when I left the hotel. By the time it left London, it was a nail-biter as to whether I would get the last seat or not before they finally cleared me on five minutes before pushback. When the flight got to Newark, I learned that the northern UK flights had been cancelled for the next day as well. Whew! I’m Even Steven.

I had a tough schedule that week at work, but I was with a First Officer I really get along with, so it went by much more easily than it could have. Throughout the week, I monitored the ash cloud concentration charts diligently. The danger zone for altitudes below 20,000 feet gradually grew to a blob covering the entire western half of the North Atlantic. From 20,000 to 35,000, the altitudes used by most airliners, the blob was about half the size but still presented a pretty large barrier to a crossing.

Fortunately, the ash cloud had managed to stay sufficiently offshore of the British Isles that no more flights were cancelled during the rest of the week.

On the transatlantic trip home, my flight deviated significantly left (North) of the usual great circle track to Scotland. We started by heading NNE until we were a couple hundred miles north of Cape Farewell, the southern tip of Greenland. The flight then turned NE until Iceland where we first passed over a barren and desolate looking landscape of mountains and ice then, just a few miles to our right, we passed to the windward side of Eyjafjall, illuminated by the low midnight sun. By then, the ground was obscured by a layer of low cloud, but the plume could be seen bursting through and then curving to the SE. The off-white plume was boiling and tumbling over itself as it cleared the cloud below. It then gradually smoothed out and could be seen stretching off over the horizon. At our altitude, the horizon was about 250 miles away. The ash cloud stretched about ten times that far, gradually becoming indistinguishable from the cloud layer below. 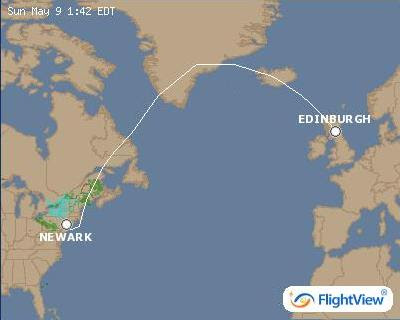 Route diverts well North of normal path to avoid ash
There is a lot of ash and smoke coming from this volcano. Comparing it with the eruption of Montserrat as we sailed by in December of 2008, Montserrat looked like a tea kettle boiling next to a power plant chimney. The amount of mass being thrown into the atmosphere is enormous. It’s hard to imagine how there could be any of the mountain left. I wish I had taken some photos, but I didn’t have the camera with me.

Volcanic ash is very dangerous for turbine engines (jets and turboprops) because the ash melts at turbine engine combustion temperatures. As the combustion gases and ash make their way through the engine past the combustion chamber, the gases expand and cool. The ash then solidifies and becomes caked on to the turbine drive blades, changing them from an airfoil to a useless club shape. This causes the airflow to try to go the wrong way, resulting in complete and permanent failure of the engine.

I didn’t want to fly through the ash, but I’m glad that, so far, the airlines are able to find useable routes around it and thus I was able to get home. I’m Even Steven.
Posted by SV-Footprint at 12:37:00 PM

So glad to hear you made it back, Kyle, even if you had to take the long way home. I wonder if you could see any of the molten flow from your elevation. It's startling to watch the earth actually destructing and being formed right before your eyes. Enjoy your time together again and keep posting!