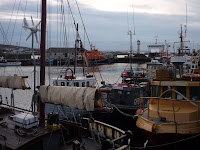 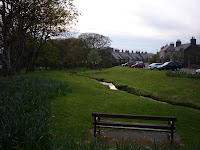 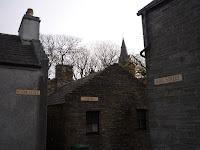 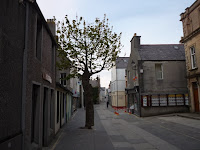 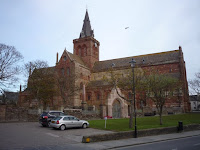 Scenes from Kirkwall on the Mainland of the Orkney Isles
[Maryanne]Kirkwall is the capital of the Orkneys, and is on the main island (or mainland) of the Orkney Isles. Kyle and I had each been to Orkney before, and each had seen the its famous tourist site: the exceptionally well preserved Neolithic settlement of Skara Brae. This time we needed to see some of the lesser sights, but the weather was severely limiting our options.

[Kyle]After experiencing nearly an entire day of Summer, it was time, once again, for Winter.

Maryanne made a trip to the Kirkwall travel/tourist office and came home bristling with brochures and bus schedules. Public transportation causes you to lose a lot of time waiting around, but we did still manage to find a couple of cool things to do. Maeshowe Neolithic Burial Chamber - yes, under that big mound!
Thing one was a trip to Maeshowe, a Neolithic burial site that predates the earliest Egyptian pyramids by 800 years. The site consists of a long slender tunnel leading to a large square main chamber. Each of the other three walls has a small doorway leading into smaller, lower chambers. The whole thing was constructed using dry stone technique (no mortar) with enormous slabs, some weighing nearly 20 tons. All of this is covered with about 10 feet of yellow clay brought in from quite some distance to form a mound about 20 feet high.

The site itself was interesting, but it was also fairly small, so it didn’t take long to see. The tour, however, was really well done. Our guide, after torturing us by making us stand out in the freezing rain while he didn’t even seem to notice for the first five minutes of the talk, finally let our group of about sixteen into the main chamber. From there, he went on for another 40 minutes telling us all about it. Maeshowe is interesting for two reasons. One is that it is a 5000 year old burial chamber; the other is that it has the largest collection of Viking runes outside of Scandinavia. They had broken in looking for shelter in the 1100s and carved runic graffiti all over the place.

After the talk, our guide opened up the floor for any questions. Most of us asked for clarification on one point or another which he answered knowledgeably. Then a guy asked how the acoustics were, like for chanting and such. Before the guide could answer, he and a couple of others started up, imploring each of us with his eyes to join him and share his mystical experience. Our poor guide got a look on his face. I imagine it is the same look Eiffel Tower guides get when they realize that they’ve been had and that a handful of the group has parachutes and are planning on base jumping off the thing.

“Oh great,” the look said, “Another group of nutters. We get ‘em two or three times a week. Just ignore them and they’ll lose interest.” They did, in fact, but not before shooting each of us a look that made it clear they disapproved of our lack of spiritual awareness.

We waited in the rain for another hour and got the return bus to Kirkwall, where we walked to the Highland Park Distillery for their tour. I had a Highland Park at the Eagle pub on the Caledonian Canal and really liked it. Maryanne and I were both looking forward to the tour. Plus, distilleries are warm.

This one was very nice. Highland Park is one of only five distilleries left in Scotland that malts their own barley so we finally got to see that. We actually scooped up a handful of freshly sprouted barley right off the malting floor and had a taste. Mmm, maltey! 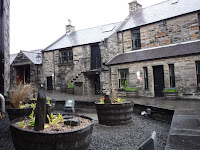 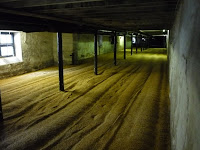 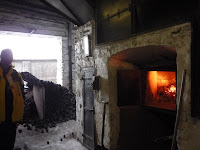 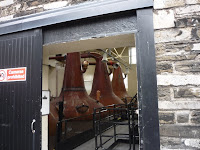 Highland Park Distillery - most northerly Whisky maker
They also dry their malt over local heather peat fires. We also got a lot more information about the barreling process than other tours. Wow, that sentence even bored me. Well, it was interesting at the time! Unlike other distillers, Highland Park does the entire maturation in sherry casks instead of starting in bourbon and maybe finishing with a couple of years in sherry.

All of this makes for what several experts have called the finest whisky in the world. It surely is yummy stuff.
Posted by SV-Footprint at 5:08:00 PM

I'm very jealous indeed. Highland Park is one of my favourite whiskies and its a distillery I would love to see. We've got the 12year old as favours for our wedding next weekend. Safe trip. TTH x