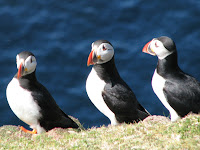 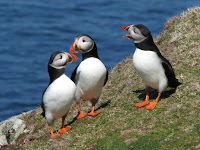 Puffins
[Kyle]For day two in Fair Isle, we pretty much decided to see everything we hadn’t the day before. We started by going to an area known to have Puffins. Puffins like to nest in ex-rabbit holes at the top of cliffs with a view of the sea so they like the thin layer of dirt on top of the rocks preferred by other species. We were just strolling along on the perfectly manicured (by sheep) lawn at the top of one of the sea cliffs, when we saw a couple of Puffin heads poking above the edge with their adorable permanent look of surprise. We were able to slowly creep up to them and then sit on the grass as close to the edge as we dare and just watch them.

It always amazes me in this world of jet planes and internet just how agreeable it is to spend the day doing something slow and simple like sitting in the grass watching birds go through the process of building a nest just right or ambling through a pasture talking to each other and watching the lambs run after their mothers on clumsy legs.

One of the things I learned from sitting there that I never really appreciated was how hard it is to live on cliffs, even for birds. Puffins would fly off to get something to eat or some nice grass for the nest and then have to return. The gusty winds and the topography make this pretty difficult. After a while, we were able to tell who was more experienced at the art. I saw one little guy come zooming up the cliff face and bring himself to a complete stop an inch above his target rock. Then he just folded his wings, put out his feet and plopped right down. The next one tripped over a clump of grass and did a faceplant right into the cliff that was so loud we could hear the impact. Then he had to flap like crazy to keep from falling off the cliff backwards. At a different point, I accidentally flushed a gull off of her egg. She returned to it by landing at the top of the cliff and then doing this mad, stumbling fall to get back. It was the exact opposite of her grace and beauty in the air. She kept landing on her head and messing up her feathers by using her wings to catch herself. It looked like it really hurt. It also looked like that was probably the only way to get to that nest. I felt horrible.

Once we felt that we had disturbed the birds too long, we went to go see the lighthouse on the north end of the island with its enormous steerable foghorn perched on a high cliff. We then went to do what we usually do – climb the highest thing we could see. In this case it was Ward Hill, the highest point on the island at 217 meters (712 feet) From there we could see the southern Shetlands and with binoculars I could just make out Start Point light on Sanday in the Orkneys. I could also see that we were going to have company later; two boats were approaching from the Shetlands and one from Orkney.

We enjoyed the mostly downhill walk through the moorlands on the north side of the island, being occasionally dive-bombed by overprotective Skuas guarding nests we never did see. We arrived back at the harbor just in time to see a Norwegian boat (the one coming from Orkney), rafting up next to a British boat on his way to Norway. We introduced ourselves and offered to help take lines, etc. and in short order were invited aboard for drinks. We accepted, of course, and spent an enjoyable evening talking about boats, Norway, Scotland, each other and anything else that came to mind, all with the beautiful surroundings of Fair Isle in the background. 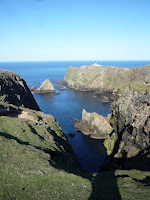 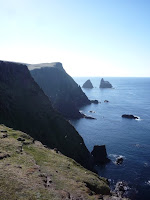 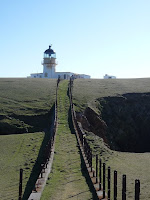 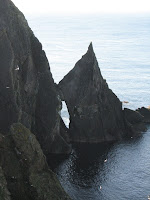 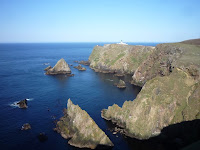 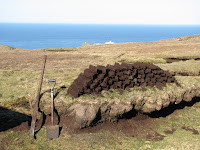 More Beautiful Fair Isle - including some traditional peat cutting for winter fuel
Posted by SV-Footprint at 8:48:00 AM

Thank you for the breathtaking photos and narrative. I am so enamored of the puffins. I don't think it gets any cuter than that!