Back to Portland, via Jewell Island

[Kyle]After a couple of days of genuinely nice weather in the Basin, Maine returned to its pre-summer state. For a change of scene, we motored over to the next inlet along the coast and anchored in the eastern end of Quahog Bay. We were hoping for at least a few hours of clear-ish weather while we were there, but our whole stay ended up being high winds and pouring rain so we ended up with a couple of indoor/maintenance days.

I had to go to work in a couple of days, so we moved a few miles closer and anchored at Jewell Island for a couple more nights. After half of a day of drizzle, it finally began to clear up. For some insane reason, that was a surprise even to myself, I decided to go in the water again and try to scrub some of the boat’s bottom, building on the work done previously on the newly clean props.

I think it was even colder. This time, I got right to work instead of wasting precious time adjusting to it. I worked as fast as I could and got the bottom down to nice fresh blue bottom paint from the back of the keel aft. This included all of the rudder and drive leg surfaces. When I started getting to where I couldn’t control my muscle movements anymore, I crawled out and stiffly flopped on deck. Maryanne sat me in the sunny side of the enclosure and filled me with lots of tea and several bowls of hot soup. It was good to get a substantial portion of the underwater real estate in proper condition again. The rest will have to wait until a warmer climate.

Well, Maybe. After I got rewarmed, I inexplicably went back in for more. This time, I got both hulls ahead of the keels done, leaving only the keels themselves and the fat part of the hulls adjacent.

{Maryanne: Please don't think me a terrible wife, I reasoned and begged with my husband not to enter the frigid waters, but there really was no stopping him. Eventually I resigned myself to rolling my eyes and preparing recovery conditions, and making sure the emergency services and life insurance company were on speed dial!}

When I got out, I couldn’t even hold a cup or utensils for half an hour because of the violent shaking. Maryanne kept the warm food and tea coming and even made me a hot water bottle to stuff down my shirt. It was four hours before I didn’t feel cold anymore. I was glad to have more sections of the hulls cleared off, though. I hate having stuff like that hanging over my head.

The next day was bright and sunny. It was already warmer at sunrise than it had been the whole previous day. I think Maryanne could tell that the fouling on the rest of the hulls was bugging me. Before I could protest, she had the dinghy deployed and we were off for a hike on the island. Whew! I needed to do the hulls, but I didn’t want to do the hulls. Instead, we hiked every trail on the island, which is a much nicer way of getting fresh air into our lungs and fresh blood into our muscles. 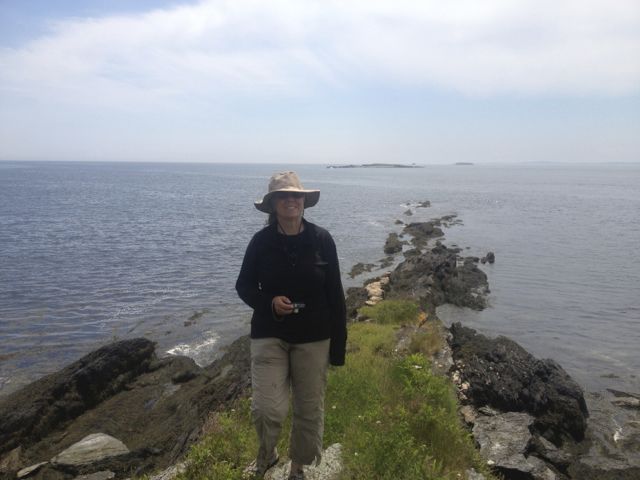 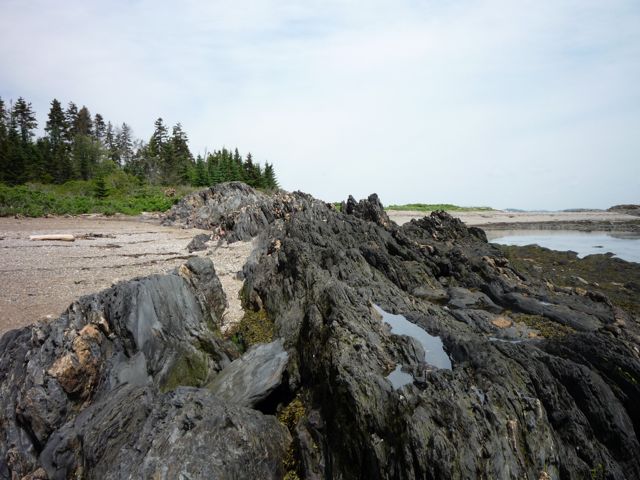 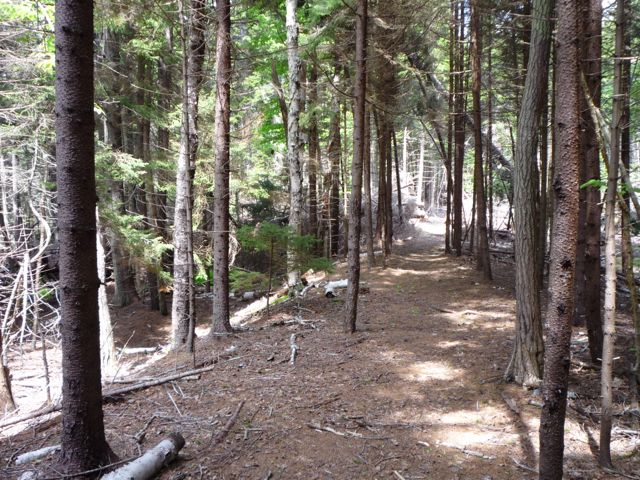 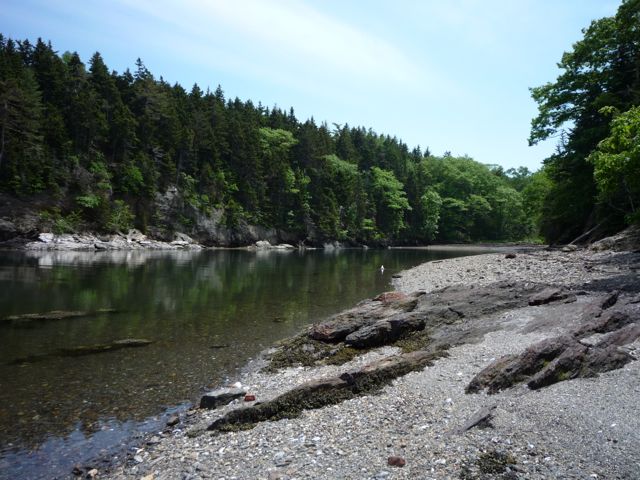 The downside was that the island’s mosquitos were taking the rare opportunity of a nice day to come out double. I seem to remember that this happened the last time we were here as well in 2008. Rather than cover myself in repellent, creating a toxic cloud that even I didn’t want to be in, I covered myself from head to toe with long clothing. For some reason, biting insects aren’t very interested in Maryanne. 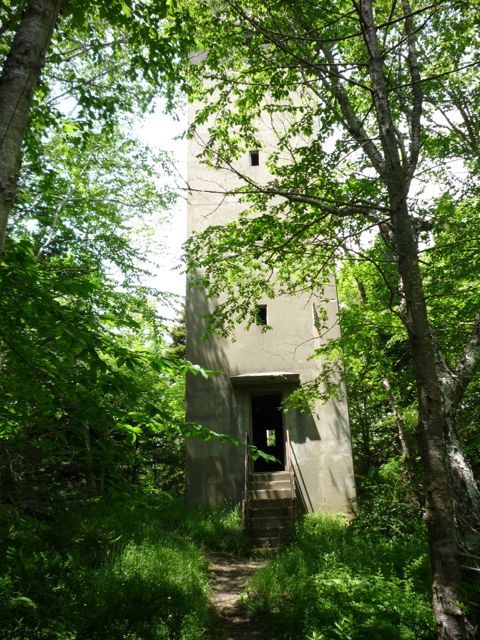 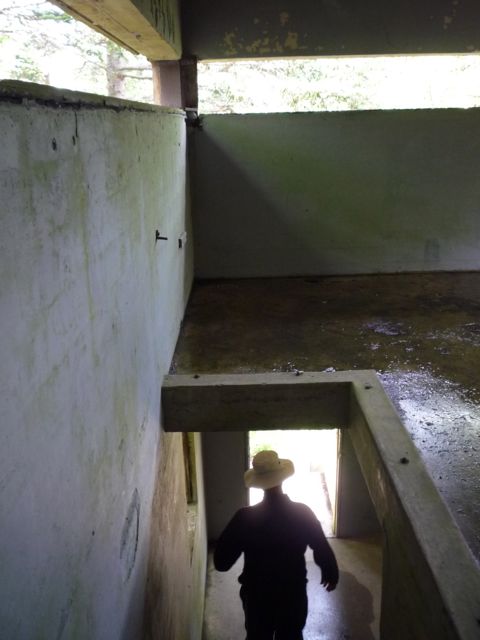 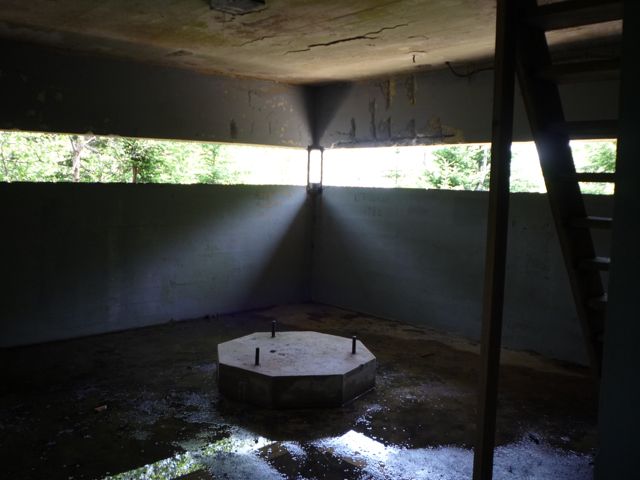 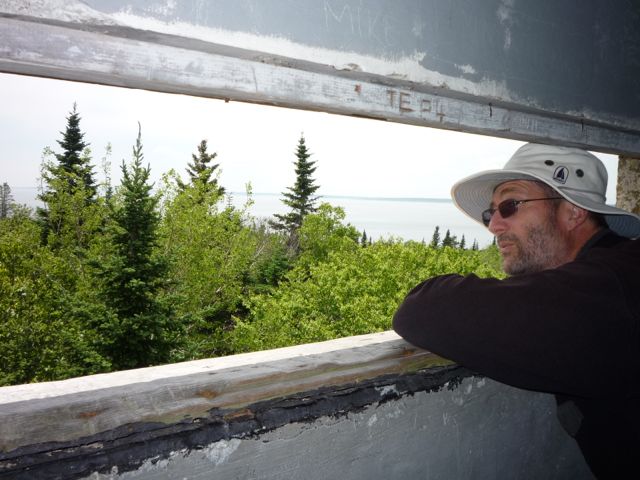 Inspecting the WWII Military towers on the island, long abandoned.

So, as you could imagine, instead of freezing, I spent most of the hot day wanting to run down the beaches and into the cold water. This would not only cool me off, but also warm up the bay. Win, win.

I didn’t do it. When I got home into bug-free air and changed into more temperature-appropriate clothing, I briefly thought about using my heat surplus to get another couple of patches of hull done. Fortunately, my sense kicked in before it was too late and I didn’t. Nah, I’m kidding. It wasn’t my sense, it was Maryanne. Her job wasn’t too hard. Once I sat down, gravity kicked in and I was stuck.

We pulled up anchor early the next morning for the last few miles to Portland. After a brief stop at Spring Point Marina to top up everything except the food lockers, we were back on a mooring at Portland Yacht Services.

I had just enough time for a shower before I had to do the long walk to the airport. Not only did Maryanne walk with me, but she also stopped in at the grocery store near the airport to restock before carrying the whole load all of the way back home on her back. Lately, I’ve developed a fondness for things that are grilled on a stone. It’s not strictly necessary, but I like to use a brand new stone for each item. I also like her to buy beer in cases because it saves 20¢ over the cost of the same beer in much easier to carry six-packs.

Just in case you’re thinking it’s all one-sided, I stopped for marshmallows and Cheetos on the way home a few days later.