[Kyle]This is what sailing is supposed to be like. It was a beautiful, crystal-clear day. We got up when we were done sleeping and set sail for south-eastern entrance of Eggemoggin Reach, towards an area pretty universally regarded as the best sailing spot in all of Maine.

We left the Little Cranberry Island anchorage and set sail. Our course had little resemblance to our planned route, which took the shortest course along a zigzagging route through the intervening islands. Instead, we tacked upwind, going offshore around the outside of the intervening islands before making our way up the next bay.

For the first time since arriving in Maine, we saw other boats out sailing. One of them was The Louis R. French, a 101’ two-masted windjammer schooner that seemed to be going the same general direction we were intending after the next tack.

We went as far out as Northeast Harbor on Long Island before tacking behind them up the Eastern Passage of Blue Hill Bay. After the tack, the wind shifted slightly aft, allowing us to let the sails out a bit from their tight, close-hauled positions. Our speed went from six or seven to just over ten knots. Wow! The current was flowing out against us, but we were still eating up the miles. After a while, I couldn’t help but notice that the schooner was getting larger and larger. Science tells me that it’s really an optical illusion; It was getting closer! (Thanks Kate!) Now I had no real expectation that a 38’ catamaran could hold its own against a 101’ windjammer flying full sail, but we were catching up to them. How thrilling!

I was looking forward to passing by close enough to get a few good photos, all while trying to appear as blasé about it as possible. Further on, though, it became apparent they were continuing up Blue Hill Bay, while we were about to break off and tack into Jericho Bay. Oh, well. It was nice while it lasted.

We entered Jericho Bay just as the current started to get strong the other way, requiring very acute tacks to fight wind and current. Complicating matters was a huge population of lobster buoys that required both of us to spot and thread a path through. It was tough. Every time we would have to turn downwind to dodge a set, we would lose hard-fought ground. Most pots have two buoys strung together, one or the other of which might possibly submerge in the strong current.

We snagged one such buoy, which dragged us to a stop and kept us from being able to steer. So far, when this has happened, we’ve been lucky enough to be able to get them to float free by stopping completely or drifting slowly backwards. Most of the time, we can do it without adjusting the sails using what’s left of our steering. Other times, we need to pull down one or both sails to get control. This time, we needed to furl the jib before Begonia would turn upwind and slow down enough to allow them to float free. While we were dead in the water and helpless, we drifted into two more sets that we picked up and released.

In the tiny patch of water before the next set of lobster pot floats, we set the sails in record time and got them pulling just in time to allow us to avoid picking them up. Picking up the buoys had set us back ½ a mile, requiring us to do one more tack and sail through two more miles of pot infested waters.

After much stressful pot dodging, we finally made into Eggemoggin reach. I was eager to see it since the last time we were here, on Footprint, it was completely fogged in and the only part of it we saw was the middle of the span of the Deer Island suspension bridge as we passed under. It is stunningly beautiful, full of little pink granite islands capped with pine trees or stately homes surrounded by big lawns.

The pot buoy population increased. Allow me to digress a little on what is a few percent of my full rant on the subject: From shore to shore, with no navigable gap anywhere for other traffic. This is in one of the most heavily trafficked sailing areas in the state. I know everybody loves a Maine lobster, but pots in this density are a legitimate hazard to navigation and the men who put them everywhere are a menace. Fin.

So anyway, after abandoning our first choice of anchorage (which we discovered full of mooring buoys) we found a gorgeous little cove just big enough to swing and dropped our hook right in the middle. We could see both ways down the reach and were protected from the wind by an island of a few acres smelling like pine and emanating birdsong. {Maryanne: We found ourselves anchored in tiny NorthWest Cove in view of a beautiful home that according to the chart is called Bemis Castle}.

The day had been a little of everything, but it was hard not to feel lucky in such a pretty place. 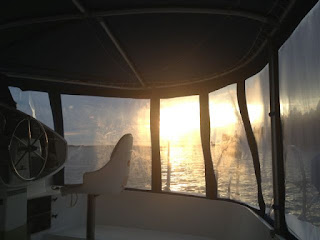 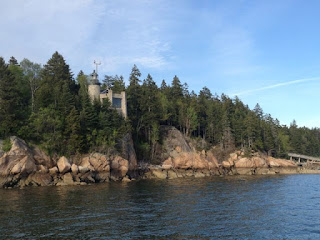 Anchored in time for dinner in the cockpit by sunset, we found ourselves alongside the grandly named "Bemis Castle"
Posted by SV-Footprint at 5:51:00 PM