[Kyle]We were up super early for what turned out to be a windless motor through patchy fog to our next stop at Roque Island. We were up so early that we had the anchor set at our destination before 7:00 am. Unlike Cross Island, which is a National Wildlife Refuge with lots of public trails, Roque Island has been owned by the same family for a couple hundred years (for all but a couple of years). Visitors are asked not to go ashore beyond the confines of one side of the island’s mile-long beach. The place is beautiful, though, and the large secure bay filled with lots of adorable seals, so we were happy to spend the next couple of days aboard admiring the view and doing some maintenance while we waited out the next blow.

We started by changing the oil and filter on our port engine. My plan after that had originally been to get the second half of the last night’s sleep, but it was such a beautiful sunny day that I decided to lower the dinghy and go sailing. 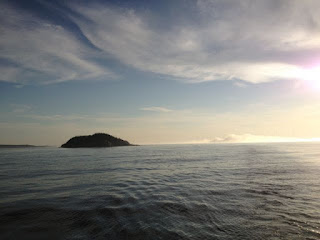 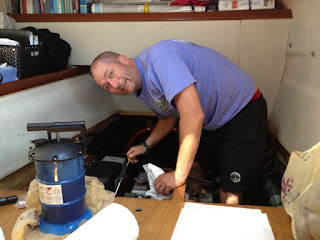 An early passage through calm waters, but chores start once we arrive.

I started by tacking my way up the Thorofare (another Maineism) between Roque Island and Great Spruce Island to the other anchorage I had considered for this stop to see if it was as nice as advertised. Once in the channel, the quickly rising tide created a current in the wrong direction for me. At the first pinch point, I found myself passing the same lobster pot buoy over and over. I would get ahead of it a few feet, then fall behind on the next tack. At first, it was frustrating, then it was personal. I was tired of looking at it. I had to pass that buoy. I tried patiently for an hour or so, then finally gave up, turning downwind and rocketing back to Maryanne and Begonia.

Not satisfied, I decided to take the consolation prize of a downwind sail past the long beach and then tacking across the bay home. I was exhausted by the time I made it back to Begonia, but then I realized it should be about slack water in the thorofare. I decided to use the last of the day to try again.

This time, I quickly vanquished the buoy that was my nemesis that morning. Further along, I came to another narrow spot and found myself repeating the morning’s sail all over again. We had read that the currents around here were strong and hard to predict, but this was nuts. How could the current be slack in one part of the channel and flowing fast (the wrong way, by the way) in another part of the same channel?

The winds were starting to get weird, too, in the lee of one of the islands blocking the other entrance. My only hope of progress was to do everything perfectly. I had to ride every available puff perfectly, then do perfect tacks. I was just starting to make headway when my legs got all caught up in one of the life vests in the dinghy as I swung around to the other side on a tack. I ended up with a huge mess of life vest, floatable cushions (which I was sitting on) and the loose end of the mainsheet. I straightened everything out while the dinghy sat in irons with the sail flogging uselessly as I drifted backwards past a buoy I had spent 30 minutes trying to get past.

I got things straightened out and the dinghy moving again. I decided I would set a limit of ten more tacks to get to the anchorage, just around the next bend, before I would give up and go home. I had already been out way too long.

I made it after eight. Just as I arrived, the current I had been fighting mysteriously stopped and the wind just stopped trying. It came from seemingly every direction at once, but only long enough to bat at the sail like a cat before disappearing, then batting at me from another direction.

I took a quick look around, too frustrated and spent to enjoy my accomplishment. At least it was stunningly beautiful. It would be a nice place to anchor amidst tree covered islands, but the swirly winds and currents would drive me nuts worrying about the Gordian knot being made in the ground tackle and having to reposition the solar panel constantly. Where we were, we would have only slight swing and plenty of wind for the batteries when it started to blow, without being exposed to the seas.

I set an arbitrary goal to reach the last buoy in the string before turning for home. I spent another twenty minutes crawling the last fifty feet to the buoy in winds that were simultaneously from every direction at once, gave it a celebratory smack with my hand and turned for home. 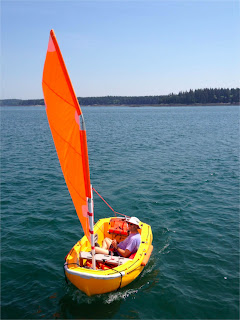 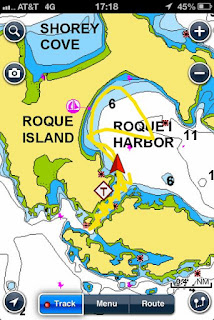 Kyle took the Portland Pudgy on a mini adventure to explore the harbor and thorofare, while Maryanne relaxed in the cockpit with a book

It took another twenty minutes to get the first fifty feet of the way back, then the wind and current kicked in and I retraced my last two hour’s hard work in fifteen minutes. It was the fastest I’d gone all day, even in Begonia.

Since we knew the weather was supposed to be bad for the next couple of days, I packed up the sail kit and handed it and the oars to Maryanne on Begonia while I prepared to hoist the dinghy into its davits. I was pulling the dingy into its harness when I realized the harness was caught up on the leeboards, which ordinarily stow under the aft seat. I removed and stowed them and then looked up to see that I had drifted twenty feet from Begonia. I had just disconnected the painter to move the dinghy into the harness when I was distracted by the leeboard problem. Now I was being blown away from Begonia in building winds. I had no motor, no oars and no sails. By the time Maryanne got a line to heave to me, which was only a couple of seconds, I was out of range. It was looking like Maryanne may have to start the engines, pull up Begonia’s anchor chase after me to rescue me. Then we both simultaneously realized I had the leeboards, and could use one of them as a makeshift paddle. She yelled, just as I dove for them under the seat. I had to paddle like a madman to counter the wind. Adrenaline is amazing for strength and focus. It took several minutes for me to close the distance to where I could finally grab an outstretched boathook. I handed Maryanne the painter, she clipped me on and gave me a deserved dope slap; and I was suddenly safe again. I was exhausted and sunburned. I'd being playing in the dinghy for seven hours.

[Maryanne]Roque is famed for puffins, and eagles and much impressive bird life. As hard as we've looked, we've seen nothing, but I've sat for hours in the cockpit with the binoculars hopefully.

"Why are you banging your head against the wall?"

"Because it feels so good when I stop!"