[Kyle]The main reason we had come to Bristol for the 4th of July was to rendezvous with Andy and Robin, our good friends from Sotito in Weehawken. They had arrived a couple of days before us, and we were eager to see them. We headed over first thing in the morning.

As we were crossing Massachusetts Bay, Robin sent us a text message telling us to remind her to tell us the story about how they were hit at 3:30 in the morning the day before leaving Weehawken by Festiva, a local dinner cruise boat. Since her message came while they were underway more than 100 miles from New York, we knew it wasn’t too serious. Still, we were dying to hear it. Festiva had scared the crap out of us all winter by coming very close to Begonia and docking with what sounded like an alarming amount of unmuffled throttle. It always sounded like they were a lot closer than they turned out to be on the occasions when we were able to watch them. However they always docked with finesse and without incident, despite the engine noise travelling through the water so close to where we sleep in the early hours, we never really felt any threat. Rumor had it that they had taken out the piling between our dock and the next one over one dark and stormy night. 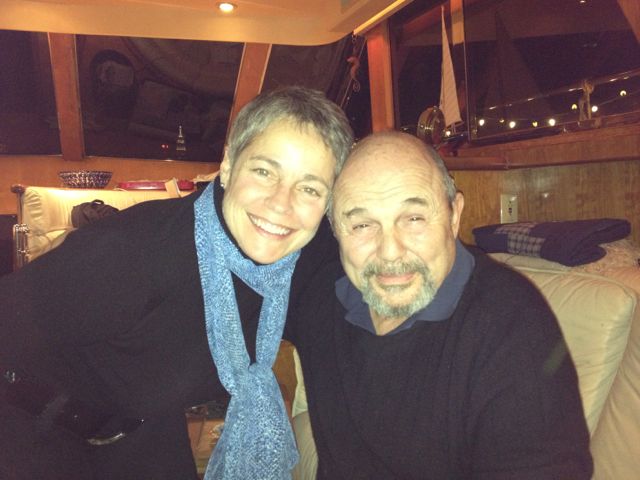 Andy and Robin aboard their beautiful Sotito

It turns out that Andy and Robin’s story was much more harrowing:

The day before they left for Rhode Island, Festiva was returning from a cruise with passengers in calm conditions to their dock just past Sotito. Apparently, as they were turning into their dock from the fairway, a transmission cable on one of the engines broke and the engine shifted into neutral. The mate, who was steering, was having trouble controlling the boat so the captain took over and sent him to the engine room to see if he could find the problem. Festiva started veering toward Sotito and it looked like they may hit. The Captain, still not fully understanding what exactly was causing the control problem, rudder, props or transmission, attempted to put the engines into reverse to back away from Sotito. When Festiva didn’t slow down, he applied more and more power. It was then that the Mate, thinking he must need the power, manually put the shift lever on the transmission itself into forward.

Festiva PLOWED into Sotito’s stern at full power. Sotito’s lines were stretched four feet. The cleats on the dock were wrenched upwards. A large portion of Sotito’s top deck was badly damaged and part of her swim platform. Festiva’s steel bow was opened up like a tin can. The Captain, knowing that Andy and Robin’s cabin is at the stern of their boat and unable to see them beneath Festiva’s overhanging bow, later told them (in quite some shock himself) that he had thought he had killed them.

After quickly determining that Sotito was not sinking, Andy and Robin spent the day checking out Sotito’s systems. Although there is substantial damage to the above deck structures, the hull and cabin were not breached and the engines and other systems work normally. Since their most trusted boatyard was in Rhode Island anyway, they decided to get the hell out of there.

When we arrived for our reunion, there were a lot of surveyors and service managers coming by to talk about the damage. Although a formal determination hasn’t been made yet, I noticed that nobody even bothered to guess at less than a six-digit repair bill. It looks like poor Sotito will be here until next year in the yard and Andy and Robin need to find a place for the winter in New York once “vacation” is over and it comes time for Andy to go back to work. It’s been a tough first year for Sotito, with marina fires, hurricanes, and a host of other issues, and despite the shock of this latest incident, it’s great to hear that they still love their boat and their life.

We spent the evening with them and it was quickly back to old times. Robin made a fantastic dinner out of stuff she just had lying around (one of her many talents). We enjoyed the view, drank too much and stayed up too late and had a great time seeing our friends again.

Email ThisBlogThis!Share to TwitterShare to FacebookShare to Pinterest
Labels: Sailing-Friends