[Kyle]The Four seasons at Manele beach has a shuttle that runs between it and their other property - the Lodge at Ko’ele in Lana’i City. For ten bucks, non-guests can buy a pass for the whole day.

We were on the first shuttle of the morning with a full day planned. Our first activity was the five-mile walk from the lodge to the Koloiki ridge. We were immediately sidetracked by the Lodge. Wow, again! Although the atmosphere was mountain instead of beach, the place was also stunning. The enormous grounds were gorgeous from every angle. The staff was also wonderful. They even offered us bottled water for the hike, which we didn’t need. We promised ourselves a good look upon our return as a reward for completing the trail and reluctantly left the property.

Beautiful Four Seasons Ko'ele Lodge at the top of Lanai

Before we had made it very far. A couple of men pulled up alongside us in a pickup truck, stopped, introduced themselves and shook our hands. It turned out they were not hotel staff, but were checking the chlorine levels on the tank supplying the city’s water. They just stopped to say hi. Aw, jeez!

At the water tank, the trail began at the far end of the fence surrounding it. Laid along the fence were about thirty walking sticks to take along. It was a big hint, so we each selected one and headed into the forest.

The steep ground was hard clay that would have been very slippery if it had been raining. We realized a bit late that the sticks were a necessity rather than a convenience. 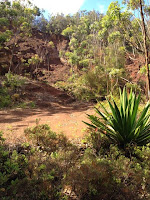 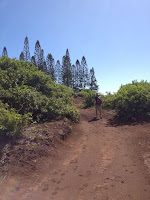 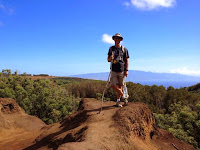 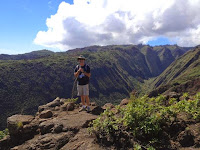 Exercise at last! And some stunning views to make it well worth the effort

The trail met up with the longer Munro trail (a jeep trail) for a bit, which led up and down through green forest before splitting off to the Koloiki ridge trail. We came out of a gap in the trees and could see the island of Moloka’i in the distance. A little bit further down the ridge, we found ourselves standing atop the junction of two steep gulches leading down to the Auau channel. Moloka’i was to our left and Maui was to our right. Wow again. Hawai’i seems to be the land of a thousand wows.

We arrived back at the lodge with muddy feet and legs streaked with clay. We cleaned up as best we could and had a walk around the grounds. There was a big koi pond, a couple of gazebos and a big pagoda. The coolest thing for me was a little conservatory buried in the back that was full of orchids. There were hundreds of varieties in all shapes, sizes and colors. In the middle was a little table and four chairs, where a guest could sit and chat over tea if they’d like. It was a perfect little sanctuary.

We headed to the main building, where we stopped for a game of croquet before exploring the many libraries and game rooms inside. Along the way, we saw a guy wheeling a cart of orchids, looking like he was on his way to one of the guest rooms. A cart full of orchids, how fantastic.

We bought a drink each from an enormously friendly bartender while we waited for the shuttle into town. We were dropped in the town center by Dole Park. We had a pass through the well done cultural center and then had a stroll around. 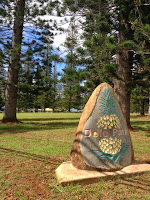 The town is definitely low key. We had a really good meal at a café that specialized in practically all genres and then went out to see the other seven things. Along the way, we met a local artist named Mike Carroll as he was painting on the lana’i of his gallery. Nice guy. He told us he was originally from Chicago. He visited the island several years ago and on the fifth day, he had put a deposit down on ‘The Worst House on Lana’i’ He’s been here ever since. I can’t say I blame him one bit.

We took the shuttle back to Manele, where our first priority was two long showers each. Ah, that’s better!

We got dressed up (for us) and headed up to the sports bar at The Four Seasons for a last farewell to this beautiful island. One of the servers recognized us and remembered our names, asking if we were there to decide the world championship of shuffleboard. Why yes we were! I mean, no, we weren’t. Maryanne killed me that night. Once she’s warmed up, she’s unbeatable at everything! We added a dessert called a Lana’i Sundae to our Mai Tais and other cocktails and had an even better evening, if that was even possible. We walked back to Begonia along the beach path lit with tiki torches. Oh, we are really going to miss Lana’i. 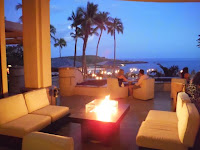 A walk along the coast back to the Hotel for the evening cocktails and fun
Posted by SV-Footprint at 2:06:00 AM

This looks amazing, I have just persuaded Lee that we must have a holiday there soon!

Carlos and I had the most memorable meal of my life at the Four Seasons in Lana'i a few years ago. It was 12 courses, all paired with wines. I ate things I would never have tried any other place and we had to go take walks around the grounds in between courses in a silly attempt to walk off some of it before we returned for the rest of the meal. It's a magic place that still holds many wonderful memories for me, and your description and photos brings it all back. So glad you're there!

Sarah - It really is a beautiful place. Very little to do except wallow in the luxury of it all, and everyone should get to try that at least once in their lives right?

Oh Carla, I can just imagine you and Carlos right there. We didn't dare venture into the actual restaurants but I'm pretty sure everything they turn out is amazing. So glad that we can share a location like this. We loved it (as you can tell). :-)