[Kyle]The weather forecast for crossing the Pailolo Channel between Maui and Moloka’i was not the best. The prediction was for 20-25kt winds and nine-foot seas. A small craft advisory was being extended every half a day for another half day. I really wanted to pass by Moloka’i on its rugged northern side, but I wasn’t sure any of our planned anchorages would offer sufficient protection from the weather.

As a strategy for dealing with this, we decided to leave during the daily lull in the winds that occurs before sunrise. This would also give us enough time to pass by any anchorage we deemed unsuitable and continue to the next, and then the next, continuing all of the way to the island’s protected lee on its western end if necessary, before running out of daylight.

We planned to leave Honolua Bay around five a.m., but we were awake and ready at four, so we decided to just get an early start since we knew the route into the channel was free of hazards and could be safely navigated in the dark.

The anchor came off of the bottom. I put Begonia’s engines into reverse to back away from our anchor trip line floats and CLUNK! The starboard engine failed. I had wrapped the trip line around the prop. I put the port engine into forward, hoping to get enough speed to make the starboard rudder effective, but into the wind, all that happened was we turned toward the beach. Reverse would turn the bows away from the beach while still backing us toward it. Alternating forward and reverse was only succeeding in zigzagging us closer to danger that we could not see in the dark.

Maryanne saved the day by jumping in with a headlamp and a knife and cutting the line free. I restarted the starboard engine, putting us back in control, but it was a hair-raising few minutes while we inched our way back into water we knew for sure was sufficiently deep.

{Maryanne: Since the loss of Footprint we always going to have extra stress attached to such a situation, we had to do something fast, we needed the boost of the 2nd propeller so I stripped off and dived in (glad of the dark!). The problem was solved quickly and we were soon out of any danger, but it was a while before we both really lost that feeling of high anxiety, it felt like way too close a call. Hopefully I redeemed myself after my inaction after hitting the whale.}

We cleared Maui and entered the unbroken wind in the Pailolo Channel. It wasn’t so bad. Our early departure had kept it relatively mild. The rain came shortly thereafter. It was a cold, soaking rain that came in waves, falling about two thirds of the time.

Moloka’i first appeared as a slightly darker gray blob emerging from a gray sky. Often, even though we were only ¼ mile away, we couldn’t even see the island at all. We would get hints of its majesty from the height of the blob, which would be regularly interrupted with the white line of foaming waterfalls.

We reached our first intended anchorage off the beach at the base of the Wailau Valley (Wailau translates to water crater). The big ocean swell was slightly attenuated by the rocks jutting out from Lepau Point, but the sea was still pretty active in the little indentation along the coast. Compounding the problem was that we had no hope of seeing the bottom structure in either the low light of morning or the heavy rain and choppy sea surface. We hovered for a bit to get a feel for the motion and decided we would give it a try. The depth sounder seemed pretty steady, so we tried the anchor in a random spot. It held fast the first time. When I dove on it to check, all I could see was a uniform layer of dense sand. The anchor and the first 100’ of chain were completely buried. Sand is our preferred bottom because its holding power is only surpassed by sticky clay, but clay is much messier when the anchor comes up. 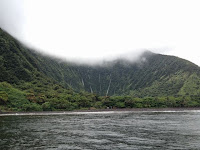 A damp and misty passage, has us arriving in this idyllic little cove surround by stunning cliffs and a glut of narrow, high waterfalls

We went for a nap to make up for the early start. When we awoke, we were stunned at what we saw. Cliffs from a Norwegian fjord had been plopped down behind the beach. Huge sides of impossibly sheer mountains towered overhead with waterfalls plunging out of the thick carpet of green. A couple of the bigger ones would occasionally be blown completely into mist by the winds whipping by outside our cove. The beach had half a dozen or so makeshift three-sided shelters. A small boat was leaving and three people were now taking shelter in one of them. I thought they might be fishermen, but on closer examination, it looks like they may be some sort of eco-tourists {we eventually decided, with no real evidence at all, that they were most likely locals from the very hard to reach but nearby town of Kalaupapa} . I hope we aren’t spoiling their view. What am I saying? We were here first, at least today. I’m sure they’ll outstay us, so they’ll have the place to themselves soon enough.

All I can really say is...thank heavens for quick thinking and action to get you out of such a bad spot. Good for you, Maryanne! Your description of Moloka'i is breathtaking. Thanks for the post!