[Kyle]We were pretty exhausted by the third day with the rental car, but parking in Lahaina is scarce and the only spot we could find had to be vacated by 7 a.m., so we were up early again.

This time, we headed first to the ‘Iao Needle, a 2,250 foot prominence right in the middle of the valley emptying from west Maui into Kahului. Maryanne was saved by the fact that there were no trails to the top. We could see why. West Maui’s older mountains have been eroded into such steep and imposing forms that they are inaccessible to all but technical climbers. We did what we could, though. 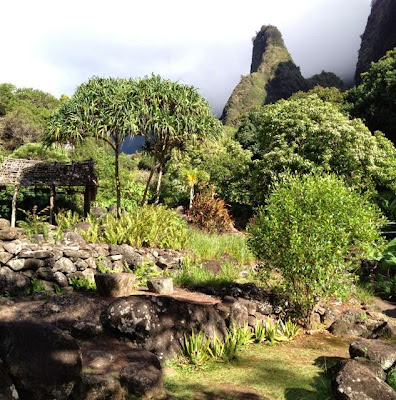 Univitingly steep, The 'Iao Needle was once regularly climbed by Hawaiians to look out for neighbouring warriors on route, it remains a sacred site

After that, we had a nice, leisurely stroll through the Alexander and Baldwin Sugar Museum. This explained the history of C&H’s production farm, which is the largest farm in Hawaii.

We then somehow ended up in the village of Kapalua. Never mind how we got there (our rental car company might not approve). Along the way, we found a place selling candied coconut and coconut-covered macadamias. Both things are totally worth the twenty-pound weight gain per ½ pound serving.

Road food added to the amazing memories of the day.

We had the same problem as the day before with the road from Hana – every bend in the very bendy road presented a new vista of incomprehensible beauty. We needed to return the car on time, so we were increasingly forced to pass by spots that we could have happily spent the whole day enjoying. Toward the end, we made an exception for two (or three, or four) special spots. One was a place called “The Blowhole”, where a trick of geology caused the ocean swell to accelerate through an increasingly narrow opening until it explodes vertically in a geyser through a small opening. The sign on the path warns, “Do not come too close to the Blowhole. Fatalities have occurred. This is NOT a water park!” Perhaps it was good that we didn’t have time to go all the way down to it. 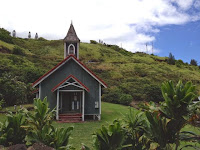 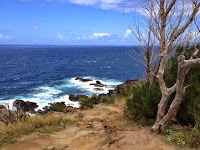 The other spot was just an exceedingly pretty little bay where every car on the road seemed to be stopping. It was bounded on each side with craggy a’a lava and dotted with multicolored snorkelers. There was something that seemed familiar about tis little bay. I thought about it for a while and then realized we had made it to Honolua! I pulled out my phone and started the navigation software to check. Yep, it was Honolua, our next anchorage! I was so excited it was all I could do to not rush home and start sailing that very minute.

In due time. We returned the car and the company was kind enough to drop us off at the Lahaina Yacht Club, where we flashed our card and were let in. That night, it was just a nice bar filled with loud and excited Stanley Cup fans (that is ice hockey for those who don't know), but it was still so cool to be sitting there in Hawai’i as guests of the Lahaina Yacht Club.

We mingled during Happy Hour and both had long, hot showers before heading out into the town for a farewell to Lahaina dinner. We ended up at the Sugarcane Grill – a Thai place with a second-story balcony overlooking the beach and setting sun, it was marvelous.

I stopped by that very church you posted a photo of and have pictures of Darren standing in front of it. So strange how the miles vanish in shared memories.