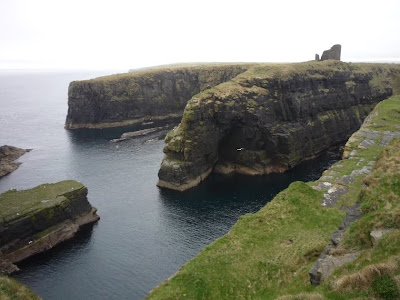 Old Wick Castle
[Maryanne]Kyle and I managed a good hike to the south to check out remains of Old Wick Castle. Supposedly there was a trail, but it was boggy again, and passed through a military firing range (luckily no red flag flying the day we went). Kyle was concerned about what we might do if on our way back we found the flag flying and we’d be stuck there... Hmmm... Good Question. The castle was little more than a square of walls, much damaged, but set on an amazing site of high sea cliffs that 100’s of nesting sea gulls clearly appreciated. In town we spent some time searching out the Worlds shortest street. We walked by it a few times, I guess being small, it doesn’t seem like a street as much as a corner. Ebenezer Place is just 2.06m long, has one door, and an official postal address, and well, looks like a curved corner of two other streets.

Ha! So Kyle was eventually off at Work, and I’m left to play. Well that sounds all good and well, except that the weather really didn’t cooperate AT ALL, and every item I started on my chore list turned into a multi-day exercise to keep me well away from too much fun.

I HAVE met some amazing people. I contacted what sounded like some interesting locals Via the international community web site Couch Surfing, and had a wonderful time with Louise and Mano from the nearby Lybster (Fist syllable: Lie) a tiny little fishing village just south of Wick. Louise is a gutsy gal who can hold her own with anyone, and has many, many talents (e.g. she makes her own chutney, and she gifted us a nice little chilli version for Kyle and me to try). They were both fun, but also really helpful, they offered me rides as far as Inverness and enabled me to purchase a giant load of groceries and have the use of their car to deliver them back to the boat.

I also have new neighbours; an Australian boat called Acrobat with Charlie and Marie aboard. They are stuck here waiting for the weather to be more favourable to move North and we’ve been entertaining each other to help pass the grey days to some extent.

One of the chores on my list was to fill my propane cylinder. My expert research had shown a petrol station in town with AutoGas where I could fill the bottle. But things change and the station has closed down, no alternatives existed; so much for my research! So this week I’ve entered the world of making up hoses and decanting Propane. A very slow and frustrating process at which I was only half a tank better off after 2 days of trying. I would have been even worse off if it wasn’t for the assistance of Charlie next door. Oh well, we should be able to fill at Orkney and Shetland so it’s not as worrisome as I first thought (this time I phoned ahead to be sure the places were still open).

I’ve continued to explore Wick (mostly indoors) and spent a day at the Heritage Museum. It is a tardis of a place, and stuffed full with interesting photos and artefacts. It lacks a little in explanations, but makes up for it well by having lots of friendly locals that are happy to spend as much time as you wish to tell you stories about each and every display; it was wonderful.

I’ve been up to this area of the Scotland only once before, and most likely will never be here again. On my last visit I failed to detour to John O’Groats – this time I was not going to be so amis. All I needed was a nice day with no rain, so I could actually enjoy the views. That was Friday. 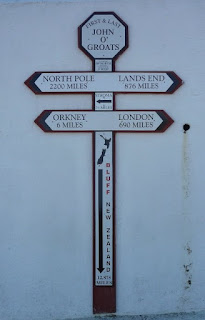 Proof!
John O’Groats is the British mainland’s most northerly settlement, and is tucked way up on the far NE Corner. Just two years ago, Kyle and I visited Lands End in Cornwall, the most westerly point, it is at the “other” far corner of Britain (SW). Lands End to John O’Groats (LEJOG) is a classic journey in the UK, and often the start and end points of charity walks, runs, cycles etc. At 874 miles, the Yanks and the Aussie may not think much of it! Regularly walkers seem to make the journey in about 90 days, and there are many different ways to get from end to end. I took a little longer, but finally I can say that I’ve been to both (for what it’s worth!). 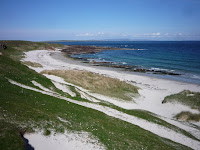 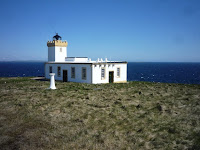 Duncansby Head beaches and Lighthouse
Of course the small village itself is a tourist trap of things to buy, I was a bit early in the season for even the official photographer to be cashing in. Rather than hang around I took the trail along the coast to the most North-Easterly point and it’s lighthouse, Duncansby Head. Just south of this are the impressive Duncansby Stack formations – well worth the 2.5 hour round trip hike from John O’Groats. 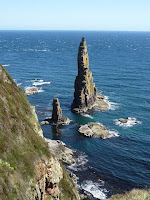 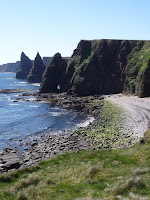 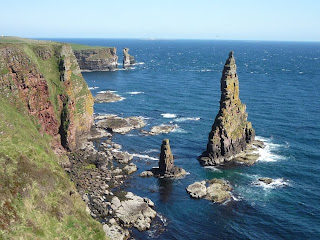 Duncansby Stacks
Having spent a whole morning on travel and exploring I still had half a day to spare so I set off for Thurso (most northerly town in mainland Britain and the other big town in Caithness, along with Wick, this one on the North Coast). The town seems to be a similar size, and have a similar history to Wick, but appears quite a bit healthier economically. Mostly this is down to Dounray (the Nuclear Power plant, now well into its decommissioning lifecycle employs at least 2000 workers).

Thurso has an excellent museum dedicated to showing the history of the whole of Caithness (Caithness Horizons), it was even free! I managed to spend a couple of hours there, took a stroll around town, and finally got the bus back to Wick. By chance the bus stopped right outside Wick library and I jumped off eager to see if it was true about the Crocodile. I found him, a stuffed Indian Crocodile tucked away unloved in one of the library rooms. Well who has the space? 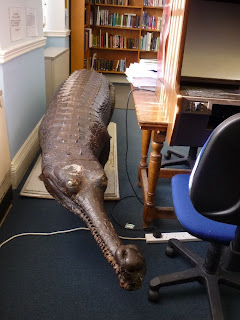 Resident Croc at Wick's Carnegie Library, please don't return your books late!
I spend a lot of time in local libraries on our travels and I was amazed to find Wick library so busy. There were kids and families all over the place. Eventually I found the source of the odd behaviour - the local primary school (ages 4-11) was using one of the library rooms to host an art exhibit of the kids work. I could hardly believe the art was from a primary school, the work was fantastic, used plenty of mediums, and certainly nothing like the crayon drawing and finger painting I did at school!

For my day of travel around Caithness, I'd studied the bus timetables and it seemed I could take a leisurely pace and still see everywhere I'd planed - all for a £6.20 day rider ticket. Of course that only works if the first bus doesn't just drive right by you. The prospect of waiting 2 hours for the next one to drive right be my did not appeal, so I set off and hiked with my thumb out! Yes I managed the whole day with 1 bus ride and 3 separate locals moving me along. I met more interesting people including one older chatty local I could barely understand, and a lady just back from sailing a tall ship in Spain who kept her sailboat at Dunstaffnage (where Kyle and I had spent so much time) on the west coast of Scotland.

I guess you could say I’m warming to Wick and Caithness. It’s still grey, but they assure me that it looks better in the summer once the flower beds are in full glory. The council workers seem to be preparing many of them now and in the mean time there are plenty of bright yellow daffodils in the parks. The streets still seem very grey, and the rain doesn’t brighten that up one bit.
Posted by SV-Footprint at 5:02:00 PM

That is definitely the coolest crocodile I've ever seen in spite of the fact that he has a strange resemblance to an old boyfriend....