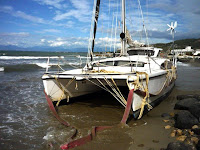 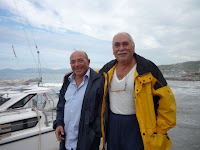 Footprint close to the rocks, but still relatively dry inside & our new heros Pasquale and Enzo
[Kyle]With Footprint on the beach and us holed up in a local apartment it was already an unusual night for us. At 3:00 am, another thunderstorm passed, bringing in more large waves. Footprint could be seen being pushed much farther up the beach. The first thing on Saturday morning we checked on the boat and it was clear that it had some additional damage was visible from having the port hull dropped onto rocks protruding from the sand she had moved to. 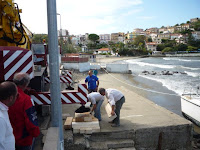 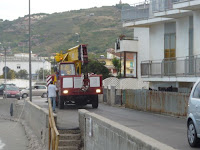 First rescue attempt - the Crane
On visiting the coast guard at the appointed time they were especially helpful and offered to contact a local crane company to haul the boat – we accepted. The nearest access to Footprint was on a very narrow one-way road that would barely accommodate the crane. The crane somehow managed to arrive. Stabilizing arms were extended and lowered onto the adjacent concrete pad. The concrete structure began to crack under the weight of the stabilizing arm (before the boat was connected, this was just form the weight of the crane – even with wooden blocking to spread the load) – Possible claims (??). It was quickly decided the support structure they needed to lift from was hollow and not suitable. At this point the CG and the recovery agents decided to try and tow the boat either to the nearby harbor and haul out, or to an alternative (sandier/safer patch of beach). The boat had minimal water in the starboard hull and port water level was stable at about 2” above the floorboards (roughly equal to the water level outside) and was readily emptied with the manual pump. The boat was hard aground but still appeared to inch closer to shore and rocks on the impact of larger swells/waves.

The towboat used was a local fishing boat, presumably called by the CG or the recovery crew. He insisted we agree a price before he would move his boat to the scene. He asked for €1000 and we negotiated/agreed €900 (still to pay). At this point and throughout the day we were desperately hoping for contact with our insurance company. Without this help we had to make decisions as best we could for the sake of the boat and property and rely on expert advice from the Coast Guard and the recovery crew. Often this advice was at odds and they debated long and hard in Italian. The language issues hampered our understanding, but we had a very helpful translator with Vincenzo, who was selfless with his time for us..

Maryanne was requested to visit the CG to complete a report of extraordinary incident (the boat grounding), in order to authorize the tow. I remained with the recovery crew, who then began attaching straps around the circumference of the boat.

While Maryanne was at the CG, the CG commander reported that the weather was too poor for the tow and he refused permission, saying conditions were too hazardous. Eventually, when he checked subsequent day’s weather, he determined that it was only going to get worse. The boat was in a poor position (near rock and concrete structure), so it was decided it WOULD be best to move ASAP. Permission was granted and preparation was now focused on this. 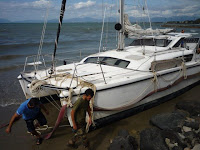 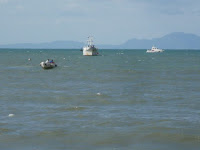 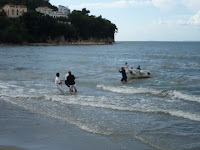 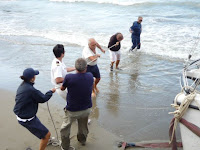 Preparing the boat for tow, the CoastGuard, tow boat and tender arrive and so many people help get lines to Footprint from the towboat
The fishing boat arrived, which was much larger than we expected and could not get close to our vessel. A smaller open workboat arrived at the fishing vessel and picked up the end of a mile long steel cable on floats being fed out by the fishing boat. Towing the cable to shore was a long process. Once the workboat reached the surf, they were clearly having trouble keeping control against the pull of the heavy line. At one point, the man at the outboard engine was washed overboard, sending the boat spinning out of control until the man handling the cable was able to make his way back, stop the engine and pull the other man back aboard. One of the recovery team, Angelo, who was wearing a dry suit, waded out through the surf to help stabilize the workboat as it approached through the surf.

Once they were close enough, a long line was attached to the cable and it was disconnected from the workboat. Then about a dozen people, including crew, bystanders, us and the CG man in dress whites who kicked off his shoes and waded into the surf in his socks, pitched in pulling on the line until the cable could be attached to Footprint’s towing straps. 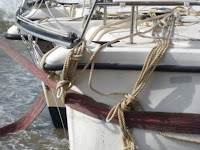 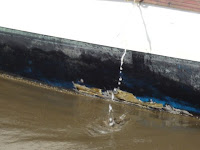 First tugs damaged the Port bow, and gave us better visibility of the damage to the hull
Once straps and tow harness were attached, the first pulls to turn Footprint bow to the water damaged the Port bow structure, caving it in badly above the waterline. It was still considered best by the teams involved to proceed and remove the boat from the dangerous area. There was much negotiation between the Coast Guard (supervising the recovery) and the Recovery team about responsibility, public safety, and pollution issues. This process did not go as smoothly as we had anticipated and took some time, all conversations were in animated Italian and we were grateful to be provided with occasional translations.

Should the tow be attempted, or should we wait for extra buoyancy to arrive? It was eventually decided that Footprint would be towed through the surf, and then a determination would be made whether to tow her into harbor or re-beach her (in an area the crane could reach) based on the rate of flooding. Holes in the port hull below the waterline that were accessible were stuffed with cloth (one of Kyle’s t-shirts) and sealant to slow the water ingress. As the boat was towed forward off the beach, both rudders were broken beyond their upper swing limits. 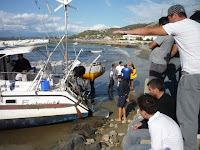 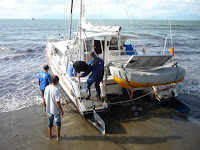 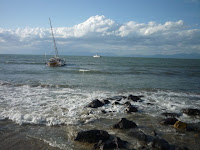 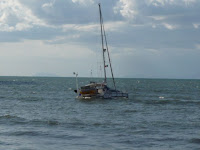 Slowly off the beach and afloat again, but after a long wait she begins to list
Once the boat was removed from the beach and afloat with me and Angelo aboard pumping, there was some time spent to determine if water was coming in faster than could be removed using with our electric pumps, manual pump and an additional electric pump. Eventually, it was agreed water was entering too fast, and the boat would have to be moved to a safer area of beach and grounded there. During this time, the port hull filled to about two feet above the floor. In the high winds, the towboat was having difficulty controlling drift. The configuration of the beach made it impossible to get Footprint to a crane-friendly spot using the mile-long line. Footprint was filling with water. I started Footprint’s engine, abandoned pumping and disconnected the drive leg steering lines. It was amazing it started with the batteries underwater after all three had been used to run the pumps. By using reverse and hanging off the stern manually steering the drive leg with my arm, Footprint was able to have some control against the pull of the slackened tow cable and be directed to a safe patch of beach. Water in the port hull reached the height of the bridge deck and started crossing over to fill the starboard hull. As the beach was approached, the engine was shut down and the drive leg was lifted. The tow cable was disconnected and Footprint was left to once again be driven onto the beach by the surf. It was a much too soon repeat of a bad experience. Lines were waded out and attached from shore. Another man from the recovery team joined us aboard. By bailing with buckets, we were able to get the water level inside to about half while every available hand ashore pulled the boat toward shore and as high up the beach as possible.

We finally secured the boat again with 3 lines to shore. The boat was now full with water in both hulls just below counter top height. The damage to the Port hull had extended.

It seems the entire town has taken us under their wing, particularly Vincenzo and his longtime friend Pasquale, who lives in the same apartment building. They have both been more than generous with their time and energy. We were invited to stay another night at Enzo’s (short for Vincenzo) and were treated constantly to his and Pasquale’s delicious cooking. We were introduced around the neighbourhood as we completed various errands. The boat was a problem to be solved and the reality of the situation probably not really impacting on us at this stage, the Kindness of our hosts and all the officials and strangers that helped today have been overwhelming and Agropoli will always hold a special place in our hearts despite the unfortunate circumstances that found us here for so long.
Posted by SV-Footprint at 1:14:00 PM

i am having trouble swallowing and my eyes are getting swimmy - you don't have the luxury of crying because you're right, this is a problem to be solved & you must focus on that. so i will be the emotional one in the interim. i am so sorry but also eternally grateful for the wonderful people who are helping you so selflessly - it feels good to know you such folks around you right now (since i can't be one of them). we are keeping our thoughts positive and so appreciate having this update. love you guys and thinking of you often...

I've tears in my eyes. SO SAD and sorry for your troubles! Please let us know if there is anything we can do to help!

Kyle and Maryanne: It is so saddening to see ow quickly fortune can chage. The entire Gemini community is pulling for you. Stay safe!

I cannot read this without tears welling up, and see I am not alone. I admire you both for how you are working this as a problem to be solved--right enough--but from here, where I cannot solve the problem, it is simply heartbreaking to see Footprint in this condition.
Thank heavens for the good townspeople and especially for Enzo and Pasquale, who have been so gracious and giving to you at this difficult time.

Can't tell you how I appreciate the post and photos, as I simply haven't been sure what, exactly, happened. Holding you very close in my thoughts with love.