[Kyle]As we were preparing to go back to the boat and dive again into the mess, we got a call from our insurance man. He had sent someone to take video of Footprint as she came out of the water. We thought this was strange, as we had been emailing him detailed photos and descriptions at every step, and we hadn’t seen anyone taking video. It turns out there had been some technical problem preventing emails from going back and forth (since resolved). He said that based on what they could see of the condition of Footprint as she came out of the water, they had already declared her a total loss.

This apparently had a great deal to do with her location. She was a long way from any good repair facilities. She is too big to transport on Italian roads, so would have to be transported by barge. Once she did get to a yard, the cost of parts and labor in Italy is still very high. Even though the damage, though serious, did not seem too bad, it was not economically feasible to repair her. Had she been completely sunk outside a big yard in a third-world country, they probably would have been willing to practically rebuild her from scratch.

He emailed us the paperwork and said as soon as they got it back, they’d send us a check for everything except our personal belongings. Once the inventory of lost items in the boat was done, they’d send a second check for that. We have been amazed at the speed and calmness associated with our claim. At such a difficult time it would be even more stressful to be worrying about interrogations and arguments about value – Jackline and IMIS have been WONDERFUL, as has the agent they assigned to our case.

It was strange. Less than a week after setting anchor in Agropoli for the night, Footprint was officially gone. 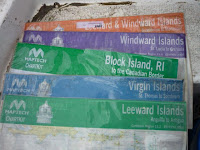 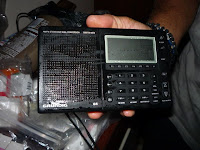 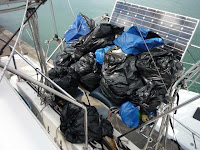 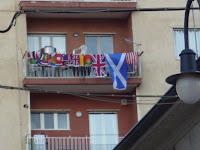 Cataloging the losses, bagging the trash and laundry of what we can keep
We were in a daze of shock as we spent the rest of the day clawing through the wet piles of stuff on our former boat. We quickly gave up the idea of being able to get her cleared out as too daunting. Instead, we focused on taking photos of dripping electronics and stuck together books. Hardest for me were the charts and cruising guides. We had such a huge store of charts from so many places. We had made it to them all safely and now they were mushy and being photographed for evidence on a sand-covered floor. It seemed so unfair, so sudden.

Pasquale went with me to the boat with his car to pick up the last of the things we could salvage. He had a terrible cold, but still insisted on helping. He’s a really good guy.

In the evening, with Enzo acting as translator, our insurance company agreed to give Footprint to Bruno and his partner Luigi as payment for the recovery operation. What’s not cost effective for the insurance company surely will be for them. They can do the work in Agropoli at cost and own the yard space she sits in. They’re not 100% sure yet whether it will be better to strip her for parts or fix her up. She may someday float again, we hope so.
Posted by SV-Footprint at 12:21:00 PM