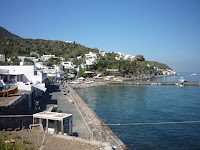 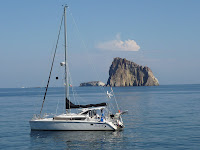 Footprint still in the Aeolian Islands - this time Panarea
[Kyle]Panarea once upon a time was a much larger island. Then it exploded, as the islands around here seem to do. Now, what remains is an archipelago with a main island that is the smallest of the inhabited Aeolian Islands. (Maryanne: We are told it is long dormant, but there are still venting pockets so who knows!)

Panarea has for a long time been one of the favored retreats of the rich and famous as a place to unwind and experience a little of la dolche di niente – the sweetness of nothing. {Maryanne: It’s much more polished than Filicudi, a little busier with tourists and ferries, but being out of season still relatively quiet – we loved it}

From the sea, as we pulled up, the island looked trim and tidy. While I’m sure bungalows are listed with millions as the unit – 1.1M, 5.4M – that sort of thing, it didn’t quite look like a movie star hideaway. It’s probably just as well, since it spared Maryanne the awkward situation of having to let down Pierce Brosnan gently and then spend the rest of the day pretending she doesn’t see him as he mopes around town. 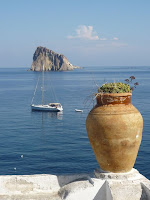 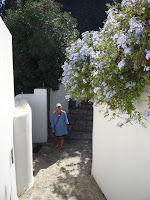 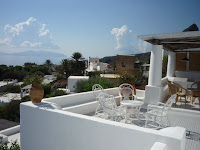 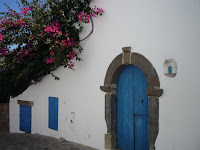 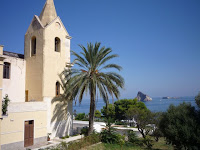 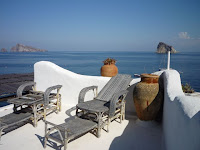 What's not to like?
There really didn’t up being much to do on Panarea. It was clearly after the main season. Both dive shops were boarded up for the winter as well as about 2/3rds of the restaurants and cafés. Even so, the island is absolutely enchanting. We walked the main road through the only town. The road was about ten feet wide at most points. It meandered through the town at what was on the large scale a generally north-south direction. On a smaller scale, it seemed to do what we were doing, which was darting around from one interesting place to the next. Panarea is yet another one of those places where every corner, every crested hill, every opening in a gap between buildings seemed even more beautiful than the last. It looked like a little piece of Santorini taken from the hilltop and placed by the sea. The windiness of the road only enhanced the effect. The island has no cars, only motorbikes and the ubiquitous little Piaggio scooter trucks, which made cartoon-like meep-meeps before putting by. 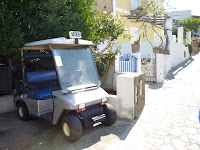 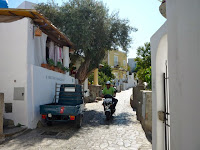 All the island transportation seemed to be motorcycle trucks, scooters or golf carts - that included the mail truck and the police vehicles - we loved it!
We walked the length of the town and finding that satisfying enough, headed to the main ferry terminal, where the last of the island’s remaining open shops seemed to be clustered. We got a couple of comfy seats at a café in view of the harbor’s comings and goings with plans to just linger for a while, as is done here.

Our server, who had clearly had it for the year with tourists, particularly foreign ones, ruined it. We stayed just long enough to recharge and headed back into the island’s rabbit warren of paths and streets. For those fortunate enough to be staying here, the big event of the day in this quiet place would be the ride to the beautiful hotel. After that, there’s nothing left to do but find a good book and a good chair in the shade of the deck, get set up with the perfect view, and then read and nap the day away. Aahhh…

We went back to Footprint, where I was content to spend the rest of the day Panarea style. Maryanne had heard the island had underwater fumaroles somewhere. Neither of us had ever seen underwater fumaroles. After a little research, we figured out they were about a fifteen minute row away in the dinghy. That settled it. Off we went with our snorkel gear. Half a mile or so away, we spotted what appeared to be the right place, but there were no signs of the fumaroles. We landed on the beach to get our bearings and find them. They weren’t underwater after all. They were on the beach. All of the to-do was over a few holes in the ground spewing stinky sulfur gas. What a letdown. {Maryanne: Don't believe a word of it, Kyle loved them, his only complaint really was walking on a rocky bolder beach with no shoes. In fairness we'd had 'bubbles' all around the boat but these were thin slow streams of bubbles and we were really imagining something a little more dramatic} 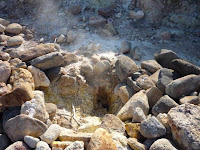 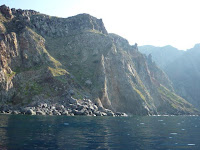 Fumeroles on the beach and dramatic cliff scenery
We decided to console ourselves with an exploratory row around to the uninhabited western side of the island a little farther on. We were rewarded with views of the most rugged terrain. Perhaps there is more to do on Panarea than enjoy the view.

We returned to the boat, where I was brought a glass of wine with Maryanne’s lovely smile. We then did what you do here, sit out on the deck, which in our case was the cockpit, and admire the view. From where we were, we watched the other islands of the archipelago turn orange in the setting sunlight. Then the shadow of Panarea slowly climbed them to their summits. They turned to shadow and then silhouettes in the light of the half moon. In the distance, every few minutes, a great orange firework would burst forth as Stromboli erupted. Yeah, the view here is pretty good.

The next morning, Maryanne was still not convinced the fumaroles we saw were the fumaroles she’d heard about. They were supposed to be underwater fumaroles. After much digging, which was hard because it appears to be a closely guarded dive shop secret, she found mention of a place near Bottaro, one of the Panarea archipelago’s island’s to the east. As we left Panarea for Stromboli, we took Footprint over there to have a look. Approaching the little islet, we immediately spotted a patch of bubbling water on the smooth sea. Since the area is a marine sanctuary and anchoring is not allowed, we alternated turns hovering overhead in Footprint while the other swam over for a look. 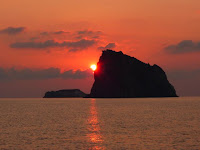 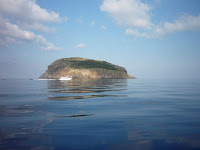 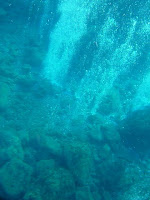 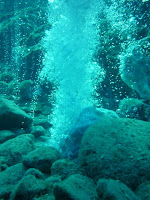 A nearly start and calm water - we soon found a large patch of seabed filled with underwater fumeroles to explore
This is what we were looking for! The whole sea floor emitted bubbles as if the sea were carbonated. Closer up, we found big sulfurous necks spewing bubbles and warm water. The bottom was just at about the depth limit for snorkeling. I stayed down as long as I could on one occasion, snapping pictures with one hand and gripping a warm rock with the other to counter my buoyancy. When it got too much, I shot for the surface, pulling my snorkel out of my mouth along the way so I wouldn’t have to clear it. I broke the surface and gasped for air only to get a lungful of warm sulfur gas. Yuck! Back on board, we rinsed off and headed for Stromboli. The hand that held the rock smelled like sulfur all day. It’s like diesel. It takes twenty washes to get it out.
Posted by SV-Footprint at 6:04:00 AM