[Kyle]When we had passed by Stromboli in July, even though it was peak season, the weather had been bad for days. Stromboli doesn’t have a harbor, so visitors are forced to pick up a mooring in the open sea next to the island (or put down an aweful lot of anchor chain). Any swell, even if the weather is calm, makes the place untenable.

This time, the seas had been flat for days. The moorings at Stromboli were chock full of chartered sailboats, each with the maximum number aboard. Ferries dropped off people by the score a couple of times an hour. The island had a real “cruise ship day” feel.

It is illegal to climb Stromboli above 400m without a guide, so we had pre-booked ourselves a guided trip to the viewing area at 918m. We were told to show at 3:30pm, and made it ashore a couple of hours early to get a bite and have a look around. We found a pizza place and sat down. Only then did we find out there was no pizza for lunch. This worried us, as pizza is the only economical food in Italy, but we were hungry, so we had a delicious meal of non-pizza Italian food. It cost us three pizzas. 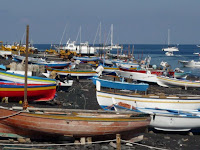 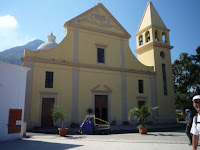 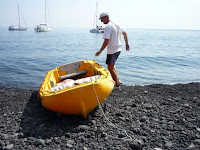 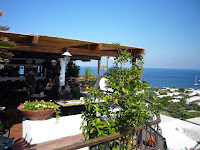 Around Stromboli
We had our bag packed for the big hike, minus the water. I didn’t want to carry it around all day and I figured we could just buy 3 one and a half liter bottles. Everywhere we went; a great plan but all of the stores were closed for Siesta until 4:00. Damn! We ended up sucking it up and buying three from a restaurant for another pizza.

At 3:30, we went to the hiking shop, where we were told we were checked in, come back at quarter to five. Then the shops opened. Then the town filled up. On Stromboli, there is really only one thing to do: Climb the volcano. Everybody in town was there to climb the volcano. All of the tours were pretty much the same. They left in the afternoon so they could do most of the climb in the daylight, but get you to the crater just after dark, which makes the magma more visible and dramatic. Then you descend in the dark. There were hundreds of people milling around with backpacks, hiking boots, walking sticks and helmets waiting for their mini-group of twenty or so to leave at ten-minute intervals. It felt like being a cow in the first act of a documentary about steak.

[Maryanne]There are numerous 'climb stromboli' companies in Stromboli, and tourism is the only remaining industry really in the town after the grape crops were destroyed by invading insects and 90% of the population emigrated to Australia way back in mid 1900s. We chose MagmaTrek, and soon discovered they had a sensible but strict dress code for the hike. This included 'proper' walking shoes. I've never been able to find a pair of those shoes that don't bruise my ankle and leave me in agnoy within an hour of using, so I simply don't wear them.. that was going to be a problem. Kyle rented a pair of hiking boots from a different store, and eventually I got permission to use the shoes I prefer, but only if I also had long trousers to go with them. I figured my 7/8 length trousers would probably be OK, but didn't want to get in to trouble so checked out the local hiking goods store. Hmmm... minimum price was about €100 for a pair of trousers. Yikes. I found a sale basket, but none of the items there were my size. A little negotiating with the owner found me the 'last pair' of bright fuchsia trousers for just €35. I took them. They went great (?!!?) with my sky blue top (at least Kyle wouldn't lose me!). So off I set for my hike in colourful clothes and anticipatory mood.

[Kyle]Our little group seemed to be mostly Germans and Danes. The climb itself was drudgery. It wasn’t particularly hard since the pace seemed to be set for people less fit than us, but there was none of the opportunity to enjoy it. Maryanne and I probably would have taken about the same amount of time to get to the top, but we would have stopped more to admire the view, look at something interesting or take pictures, hiking faster in between. With a group, this wasn’t possible. The track was single file, which meant if you stopped to take a picture, everybody behind you stopped as well. Everybody then would have to catch up. With ten-minute spacing, it was stressed to us that we all had to keep from getting spread out. Looking around while walking was bad too. Invariably you would trip. For me, the walk ended up being three hours of watching the feet in front of me. Moo.

There was a strange optical illusion on the climb. When I looked around at all of us climbing, we looked like reasonably fit people climbing a big hill. When I looked at Lorenzo, our guide, he was clearly walking at a third of the speed. Climbers: normal, Lorenzo: slow; yet he was always in front. He was so obviously going as slow as he could bear. We were all taking big steps over rocks and panting and sweating and he looked like he was accompanying an elderly hospital patient down the corridor while holding the I.V. pole. 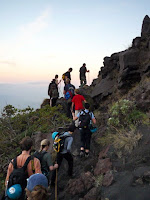 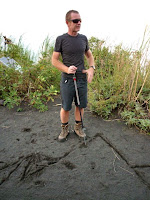 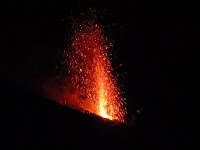 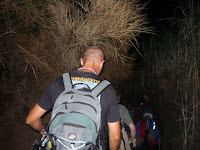 The Hike up Stromboli Volcano (and then down in the dark)
Just after our last stop to change the I.V. bag before the top, we finally got a view of the lava vent below. We came around the corner just as it erupted with a boom, followed by the sounds of the new, semi-cooled rocks raining down on the ground. It sounded like a dump truck unloading rocks onto a concrete slab. We all stopped and fumbled for our buried cameras. Lorenzo said to keep moving, the view was even better from the top, where we could look right down into the crater. Maryanne was quick and just managed to get a photo. I’m pretty sure she was the only one.

At the top, we were all lined up single file along the crater rim. The volcano had been especially active lately. Tours were suspended in July and August. There were still concerns about safety, so instead of the usual hour, tours were only allowed 25 minutes at the top to minimize the danger. The advice we were given in the event of a larger than normal eruption was to keep doing what we were doing. Keep our eyes open, watch the flaming boulders and just duck out of the way if one comes near. Maryanne calls it Whack-a-Mole in reverse.

As we stood there, clouds moved in and mixed with the smoke coming out of the crater. We saw a few feeble flashes of light, accompanied by booms, jet engine and dump truck noises, but never got to see an eruption. The best we got was when the orange part of the cloud got noticeably brighter and louder, then a patch of noxious gas wafted our way. Lorenzo snuck us an extra ten minutes, but it was obvious there would be no clearing soon.

We turned and headed down the mountain on a steeper, faster route using our headlamps to light the way. The path had us sliding down a field of sandy ash in a motion like cross-country skiing that advanced us two steps worth of distance for every one taken. This part would have been very difficult without a guide and a string of lights to follow to make sure we exited the field on the trail and not a cliff.

Further down, below the vegetation line, the trail had worn a groove a meter deep. The sides were so high, we could only see to the next corner. It felt like being a brook winding its way through the reeds.

At length, we stepped onto pavement and descended into the town. We dropped off our helmets and found a place with a really, really nice pizza that we split. In the next room, a very large group of Italians were being led in a sing-along, Irish pub style. It made for a nice end to the day.

[Maryanne]It was terribly disappointing to be looking down into the volcano and hear these great explosions booming so close to us while not being able to see them due to the cloud that rolled in just after we arrived. We had such high hopes for a spectacular show based on the recent high activity and explosive booms our guide said were unusually loud. I briefly considered suggesting to Kyle we hike up the following evening but was glad I dismissed as it seemed just as cloudy the following day. We did have five minutes of clear viewing and saw directly some of the more minor eruptions, and were lucky enough to capture the one bigger eruption on the hike up. At each rest stop the guide, Lorenzo, talked a little about the history of the volcano, the island and its inhabitants. Atop the mountiain as we peered down hoping for the cloud to clear we were joined by the local bats chirping away - now that I didn't expect!

Over the last couple of weeks we've been submersed in volcano expeditions and have seen so much up close that to this point I'd only ever seen on TV documentaries. It really is fantastic to be so close to the quirks and forces of nature unknown in docile, safe England.

We now leave the Aeolian islands and head back to the Italian mainland - I hear they have the odd volcano there too...
Posted by SV-Footprint at 6:45:00 AM

Won't go into details here as I'm sure you'll post when you can, but know I am thinking of you and hoping all will be better than you expect.