[Kyle]From Kalama Nui we sailed the short distance east to Manele, the main harbor on Lana’i. We dropped anchor just out of the entrance channel and swam to the opposite side for some more amazing snorkeling. We were surprised to find such large areas of thriving coral so close to a well used area.

Some fun snorkelling while (briefly) anchored at Manele Bay

We dried off and got into the dinghy to row into the little harbor. Before we even landed, a local guy on another boat yelled over to us and told us to bring Begonia inside where it would be more comfortable. We thanked him and landed the dinghy to have a look around. We hadn’t even stepped ashore when the harbor master’s husband pulled up in his truck and told us we were free to take the one remaining big slip for Begonia, where we were temporarily tying up the dinghy. We were on the fence as to whether it would be with it to go to all of the trouble, when a catamaran came in and pulled into the slip. We apologized for being in the way with the pudgy, but he was really nice about it. He said he had just pulled in to hose off his boat before heading to his med-mooring on the other side. He also said we should come in.

So it was settled. We had walked all of three steps each on Lana’i and we were back in the dinghy to go fetch Begonia. It was the prospect of a good fresh water rinse that really sold me. Begonia hadn’t even been rained on for weeks and I was desperate to get off the accumulated salt and dirty footprints. Plus, we could fill the tanks, allowing us to be fast and loose with our water consumption on the way to Honolulu.

We put the nominal fee into the honesty box at the absent harbor master’s office and had a look around. Our first stop was Hulopo’e beach, a long arc of soft, white sand with the backdrop of a lone rock called Pu’upehe. Lots of people were out snorkeling and sunbathing. Back in the park behind the beach tents were being set up by members of little groups while the others were cooking on barbecues. It seemed like the perfect way to spend a Sunday afternoon.

We walked past the beach up the trail to the Four Seasons Resort at Manele Bay. While I was not actually rendered speechless, my vocabulary failed me and poor Maryanne was subjected to me saying, “Wow! I really like it!” about every five seconds. I have been to a lot of hotels in my life and my career. This one is by far the nicest one I have ever seen. Ever. I daresay it was perfect. The grounds were impeccable, with different themed gardens in each courtyard. The staff, which seemed to outnumber the guests, could not have been nicer. When we admitted that we weren’t guests of the hotel, every single one of them responded by saying something like, “Oh, that’s no problem, sir. Welcome to Lana’i. Is there anything I can help you with in the meantime?”

The beautiful Manele Beach and four-seasons resort at Manele

We went to the sports bar overlooking most of the grounds and the beach below, found a table by the railing and finally ordered our first Mai Tai in Hawai’i, which we shared for economy’s sake. I had a beer. While I only have the other one I’ve ever had with which to compare, this one seemed especially yummy. It really was the perfect spot to celebrate reaching our one hundredth sail aboard Begonia. We had a great time dragging it out with several games of pool and shuffleboard. I emerged the clear winner, thank you very much. 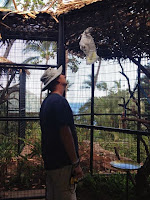 Kyle says Hi! to the rescue birds at the resort

We were having such a good time, we ordered another round. Our four drinks cost us more than we usually like to pay for two dinners out, but it was totally worth it. It was a perfectly agreeable night in an amazingly beautiful location. I could not have been more content.

I had the absolute unearned privilege of being a guest at the Manele Bay Four Seasons for a few nights and will never forget it. I haven't been to as many hotels as you, but it's #1 in my book too. So glad to know it's all still there and all still magic. You have to remember these moments when life gets hectic and smog-clogged and your alarm goes off. You just have to....