[Maryanne]In Hanamenu (NW Hiva Oa): There are no roads to here, and there was no boat on the village mooring when we arrived, so we assumed it is now only used for getaways by the remaining owners or seasonal harvesting of coconuts and fruit. Indeed we found ourselves the only boat here, and after the dark of the evening descended, it appeared as if nobody was ashore (no lights), so we were quite convinced it was uninhabited.

Given this, and the expectation of an interesting landing in the surf, we went ashore with just our waterproof camera - i.e. with no money and no exchanges for possible trade. We wandered around the river and possible trails for a while - finding plenty to occupy us (and crabs, and flies and the tiny biting no-nos). 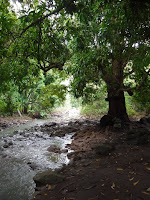 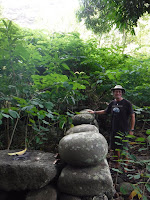 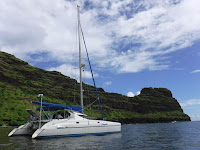 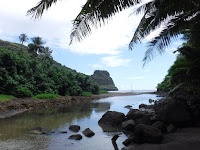 We eventually circled our way back to the old/current village. Plenty of old lava stone built walls and newer wooden homes - some amazingly beautiful (and very well tended) gardens. Eventually, we heard music playing, so we called out “Bonjour!”, so as not to surprise anyone and were welcomed by one of the owners (he was taking a short visit to Hanamenu to tidy up and mow grass after the recent death of his father). He insisted we take pamplemouse (grapefruit), citron vert (limes), and even some wild boar he had shot the previous evening. He then directed us to use the pool if we wanted to bathe. 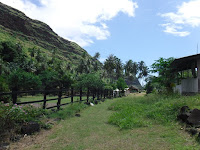 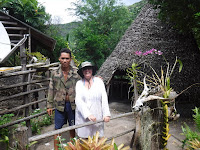 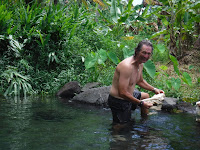 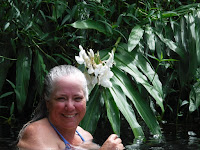 The generous and talented local
And we bathed in the pool (with the flowers and the boar head... that's a first)

The “Hollywood pool” is to the west side of the beach, within the village - where soap and loofa were also provided - it is fed by a waterfall and surrounded by tropical flowers - and on the day we visited there was also a boar’s head carefully placed to clean in the fast exit water. Quite the amazing Marquesan experience and welcome! Dinner aboard was wild boar vindaloo that night, and breakfast for the next few days will be pamplemouse! How lucky are we?

The Hollywood Pool is AWESOME. I mean, duh! I love that picture of you, Maryanne - you are obviously loving every minute, and why wouldn't you?