[Maryanne]After a relatively slow overnight sail to the next island of Nuku Hiva, we arrived at our anchorage in Controleur’s Bay to find only two boats in the anchorage (YAY!) - and one of them is WaterHoen (Alfred and Adva) - so we have friends here (Double YAY!) 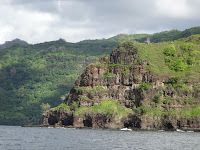 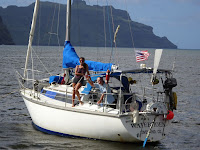 After a brief nap, we went ashore and explored for the water tap – had a walk around town (enough to find store and church) then returned to beach to fill water, and returned to boat to decant (Kyle then made a second trip to fetch more water – during which he managed to graze his knee and crack a water jug - Doh!!

Back at the pretty black sand beach, it was a weekend, and locals were apparently breaking in a horse in the ocean. It made a lot of sense – if they fall off, it is just into the water, and the water probably makes the horse tire more easily and therefore be more compliant? 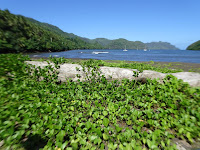 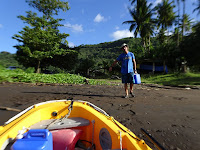 After collecting water and topping up the tanks, we had a bit of a fright when it became clear some cruisers had reported this water as NON-Potable. Luckily Kyle managed to find a local in government vehicle and uniform on the beach one day who assured him that this was GREAT water - very clean, and very safe to drink… YAY/Whew!! Close call. Kyle subsequently completely filled our tanks here (Multiple trips back and forth with the dingy and water jugs) and should be set until we get to Tahiti. 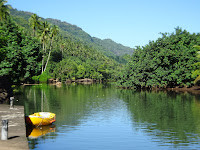 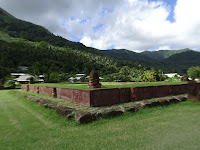 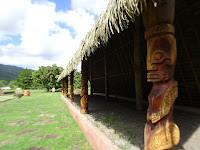 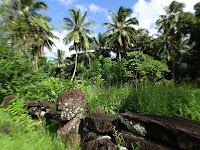 The town is a bit back from the bay, and you can access it by taking the dinghy up the river – but the river is very shallow in spots (especially at low tide) so it is quite the job to navigate via the ‘deep enough’ patches – but we became quite good at it. One morning I (Maryanne) went into town alone to do some basic grocery shopping and en route found Alfred stranded ashore in low water, so I guided him into town. [Kyle] Maryanne is Tapivai’s newest and finest river pilot!

Walking from the wharf to the grocery store we passed a couple of locals walking a horse loaded with bananas. They asked if I wanted any (YES!!!) – and when I had my share (which they offered to simply drop off at the dinghy for me) I asked how much and they refused any money. At the biggest of the grocery stores I was told there is no bread (island has run out of flour), and no eggs (just sent them all to the next town).. etc.. But I did manage to get my very short list of provisions by visiting multiple stores (and accepting frozen Baguette). Everyone was AMAZINGLY friendly and with my poor French we managed reasonably well. Locals taught me Marquesan for onion (Ani-Ani) as we giggled in the store. Kyle and I have grown to enjoy a breakfast of Pamplemouse and had used our last one several days ago – so I was determined to find some. Since everyone has fruit trees in their garden, there is no point to the stores selling them – but I asked around – and at one store was provided with 6 lovely Pamplemousse and a several Papayas (all just plucked from the tree) – again they refused payment for the fruit. After WAY longer than I had planned, I made my way back to the boat to drop off our provisions and pick up Kyle for some exploring.

Our goal was to reach a waterfall, but directions were a little vague, so we set off out of town with hope we were headed in the right direction. We didn’t find it, but instead found a sign for an archeological site 500m->. I think 500m was the straight-line distance, which required traversing miles of muddy switchbacks to cover. With each step, we had to chose between shoe-sucking mud or firmer rocks covered with enough moisture to lubricate them as if they had been greased. The site was interesting enough, but what we will always remember is emerging back onto the road covered from head to toe like the participants in those mud races they have in the U.S. South. We really needed to find that waterfall. We walked quite a bit further out of town until we were at the point where we needed to turn around to get back before dark. We finally found the waterfall in question, but it was a long way away and we were clearly not on a route that would take us there. It was pretty, though. 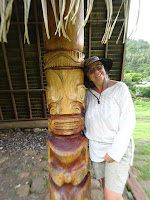 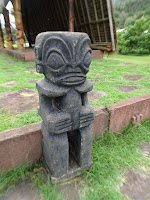 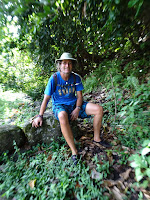 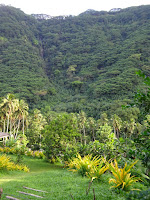 Walking back, a truck stopped after passing us. In the back was Adva and two of her friends from another boat, Danika. They had found a way to the top of the falls, but it took them four and a half hours to do so. A friendly local picked them up to save them walking back in the dark.

Later that night we had the crew of both Waterhoen, and Danika aboard for cake that I’d baked earlier in the day. They brought along to share with the crowd some chocolate apparently made by a local entrepreneur in a nearby bay – it was delicious (and they left the remainder of the bar for us to enjoy later)!

We could easily have stayed longer here, but then there were so many other places we wanted to see…

Overnight - a 70’ tree floated by and bumped against us a few times… Yikes!