[Maryanne]Just a 2 miles from Anaho is the town of Hatiheu – Several sources said the anchorage wasn’t nearly as picturesque as Anaho and suggested anchoring there and taking the horse trail over the ridge to Hatiheu for a visit. After the mud bath of our previous two hikes, we decided to skip the walk and move Begonia. We are so glad we did! Hatiheu is a lovely, charming little town surrounded by a dramatic and beautiful bay. We were so glad we came. We were the only boat there. This town has a road connecting it to the rest of the island, which makes it an end point for a lot of organized road tours. It also has what is supposed to be ‘the best restaurant’ on the island and a grocery store. 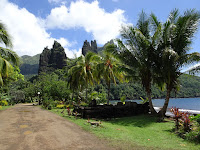 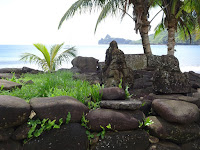 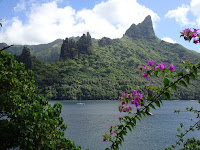 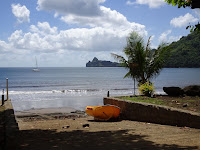 We went ashore eager to enjoy a nice meal at 'the best restaurant' in Nuku Hiva, but we found we'd arrived on a public holiday (Ascension Day) so the post office, grocery store, and restaurant were closed.

We also landed in unexpectedly heavy surf and got drenched (thank goodness it was warm and sunny).

We were greeted by a man on a horse who assured us it was fine for us to leave the dinghy in the middle of the launch ramp (that nobody would be using it). The surrounding mountain peaks are spectacular and the little town is very nicely kept and quite photogenic. We ambled around to the point with the concrete landing dock and found the town youth repeatedly leaping into the water and climbing back out, all squealing with delight, while dolphins cruised the bay as a backdrop… Ahhhh heaven. 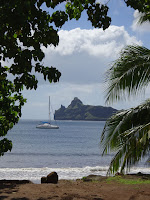 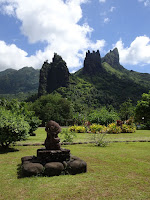 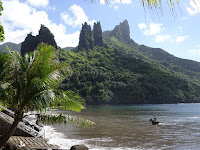 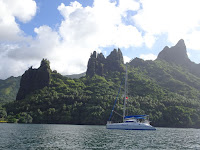 We chatted briefly with fellow cruisers that had hiked the muddy trail from Anaho (which made us extra glad we simply brought the boat around), and others that had taken a tour from the south of the island, but mainly we just soaked up the spectacular views and relaxed.

Eventually, back at our dinghy, we decided to wait for the tide to go up a little (which we hoped would reduce the swell and make launching easier), and as we sat enjoying the sun and the view - a barrel appeared to be headed our way on the ocean surface. Eventually, it became clear that the large blue plastic barrel was being directed by two snorkelers, and as they finally made it ashore, they were joined with family and the barrel was raided for spiny sea urchins, which were opened up and scavenged immediately for some prime tiny piece of meat, doused with lime and eaten with relish. We were offered to share in the treat but for such a huge effort it seemed unreasonable of us to take from their limited supplies (plus, raw sea urchin didn't seem that attractive either). 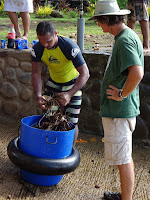 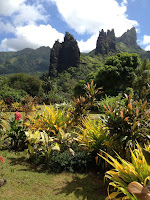 Eventually, Kyle insisted he'd launch the dinghy alone through the surf, and row over to meet me at the concrete dock so that I wouldn't have to get wet again - my Hero! He arrived at the dock and was quickly surrounded by the local kids swimming over to see him and the “grand” dinghy. He reported they gently manoeuvred him to the dock like seasoned tug boat operators, leaving just a half-inch gap for me to cross as I boarded. We returned to the boat and I cooked. After our meal, we retired to the trampoline and relaxed as the sun set. It was so comfortable that it was at some point later we awoke from deep sleep to find it dark and windy, and finally retired to our bed.

Here's to creating your own itinerary and not depending on travel guides' suggestions! You would have missed out on this beautiful town otherwise. I am just giddy over that photo of the man on his horse in the water! These are heavenly views, and I'm just so happy for you two that you're reaping your rewards in this gorgeous place. Soak it up! (And yay! Some reliable internet connection at last!)

I want it to stay this way for you day after day--sun, friendly locals, fruits and other exotic foods to eat. It's all too idyllic for most of us to imagine. I love that you're loving this so much.