[Maryanne]We moved a little further west on the North of the island and find ourselves in more rolling landscape. This part of the coastline is 'uncharted' (“Zone non-hydrographeé”). It’s amazing to think that any uncharted areas still exist – let alone on the main island of the Marquesas. (We had reliable coordinates from previous travellers). It is supposed to be a warmer and drier part of the island, but we arrived to overcast, cool, and rain; undecided if we are to go ashore as of yet. There is a family farm here and there are coconut trees, horses, pigs and cattle in obvious view. 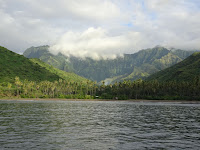 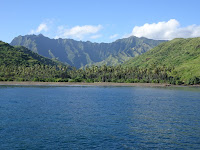 What a difference the sun makes

Eventually the rain passed, and the sun came out – so off we went for a snorkel at low tide. This was JUST as much fun as Anaho with plenty of healthy corals and lots of different fish species. After completing ¾ of the bay we returned to the boat to pick up some trades and swim ashore. Our arrival was announced by the resident dogs (who simply barked, and didn’t worry themselves by moving from the shade of their tree). One of the farmers came out to meet us and I explained in my best French (errrr…) that we were thankful to be able to share the bay with them and offered him something from our bag of offerings. He was not interested in fish hooks, there were no women there to enjoy the makeup I’d included, and no children for the kiddy treats, but we persuaded him to take a baseball cap. His colleague joined us and we handed out another baseball cap – they both seemed happy (or were at least polite). Instantly the offered us limes, and our polite refusals were ignored (what shall we do with these limes?).

We are learning that it is nearly impossible to meet a Marquesan without being offered a hundred pounds of fruit! We didn’t really need anything aboard, but to stop the discomfort I asked for a coconut – we were presented with two, and then also a bag with bananas and a giant papaya (10” long, and as fat as a rugby ball). Since we had swum ashore, we had to stuff all this produce into our waterproof bag to get it back to the boat – we managed it, but it was a close call as to whether the bag would float any longer. Kyle returned to snorkeling (to cover that last quarter of the bay) and I swam back to the boat with our supplies. By the time I rejoined Kyle he’d found 2 big octopuses and was very excited (we’d been specifically looking out for octopus for a while). 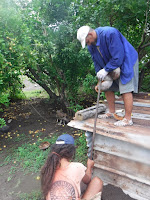 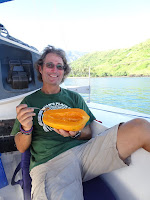 Coconut prepared for us by the residents, and a huge papaya

[Kyle] This bay seemed sparse on spiny sea urchins, which I had eaten way too much fruit to be hungry for. Nonetheless, when I spotted one, I dove down for a closer look. One of the rocks nearby got smooth and changed color, then it moved and I spotted the octopus. I was swimming around trying to get a better angle when another rock turned from speckled red to the most beautiful shade of jade green and I spotted what I assumed was its mate. They were each big enough that they probably would have been half a meter across if spread out, but they were squished down and nervous, so they would have each fit into a coffee can. I could have easily spent the rest of the day marveling at the multi-colored messages they were sending each other, but it was getting late and I didn’t want them to get to used to the idea that a nearby human wasn’t harmless, so we left them to it. 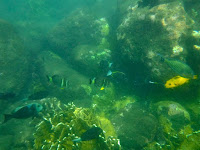 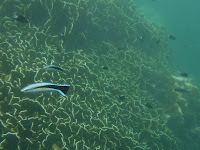 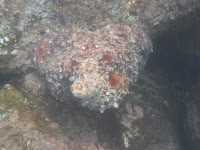 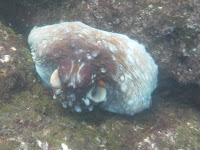 [Maryanne] Once we finally returned to the boat I was ready for some coconut. Stephan (one of the farmers) had already removed the big outer husk, so we were left with the round brown nut to crack. I extracted the coconut water (yum) and then went about trying to get into the nut. Eventually Kyle took over, and by the time we’d finished it looked like a coconut slaughter house – we have skills to learn folks – but it still tasted pretty good! More fantastic memories from the Marquesas.

And apparently no fear of the octopi? My life is way too sedate.