[Kyle]Chiloe is South America's second largest island (behind Tierra del Fuego) and Castro is Chiloe's main city. Going south, the area is the last frontier before two thousand miles of unspoiled wilderness and widely spaced settlements. As such, I was expecting a much smaller town with the vibe of an outpost than the one we actually found. 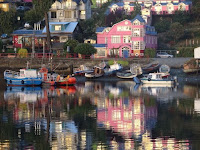 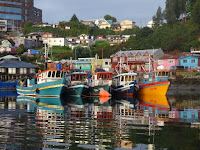 Castro has an agreeable bustle with the eclectic atmosphere of an overgrown artist community. Quirky restaurants and cafes are everywhere along with galleries and what seems like a disproportionately high number of backpacker hostels. Most buildings are unique and brightly painted, which gives it a hint of a San Francisco feel.

A central feature of the town is the palafitos, houses (and a few restaurants) built out over the water high on stilts. The constructions are technically illegal, but are tolerated because they provide Castro with 90% of it's charm. They run the whole range between rickety shacks of corrugated tin to gorgeous lofts with exposed beams and whole walls of glass looking out over the water that would make for the perfect romantic getaway, often right next to each other. The palafitos are so photogenic that it's hard to pull yourself away to see some of the city's other attractions.

Most of them are just here and there, so it's wonderfully satisfying to just wander around and take it all in. We were admiring one particularly interesting balcony when Maryanne pointed out the nearest telephone pole. Yeah, I know, they're everywhere, but I hadn't really looked at them. 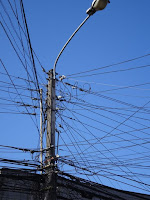 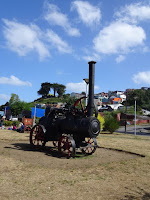 Kyle was especially enjoying the wiring and old trains

The one before us was a marvel of jury-rigging. It seems as if the whole neighborhood was being supplied with electricity by doing the equivalent of plugging power strips into power strips, ad infinitum. In fact, they all look like that. This whole town is SO not up to code. I guess that explains the palafitos as well. It's strange, because in other ways, Chile is so modern. It is illegal, for example, to change a tire without wearing a high-visibility safety vest and the road system seems to be built to high European standards. 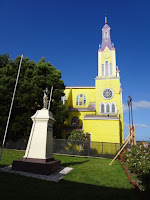 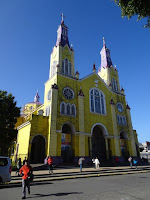 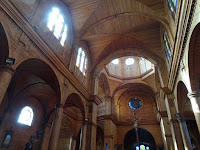 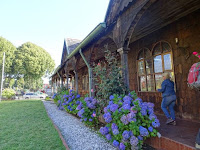 Anyway, while we were staring at the telephone pole wondering why it had not burst into flames, we spotted the spires of the cathedral, which of course meant we had a new goal.

Chiloe's churches are pretty interesting places. They all share a certain ramshackle look, which is easy at first to mistake for dilapidation. On closer inspection, they are all built of local wood using traditional joinery methods, like an old ship. Many were built using wooden pegs instead of nails. Knowing this transforms them into impressive feats of workmanship. The fact that some of the walls aren't perfectly vertical seems forgivable, considering they were put together by hand generations ago.

Covering Castro's cathedral, Iglesia San Francisco de Castro, is what seems to be the traditional Castro exterior of corrugated tin, which is spruced up by painting it a bunch of crazy colors. Looking at historical pictures of the place is disorienting because it has had so many looks. Maryanne conjectured that each new Bishop seems to have decided to made his mark by ordering a new color scheme.

We returned home via an artist's market at the plaza and then a long walk past the palafitos.. It's clear that the people who live in them are in the most coveted dwellings in the city. Even the most basic had well-tended tiny flowerbeds and little bits of garden art. It was kind of like Sausalito, but also kind of not. 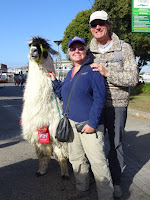 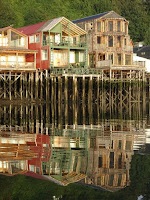 We found this fella while on our walking tour 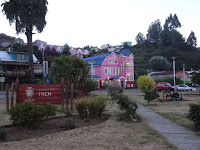 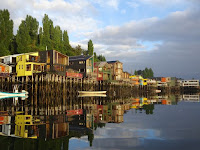 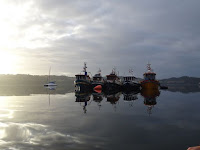 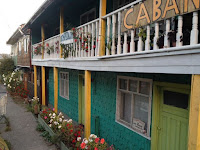 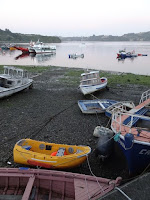 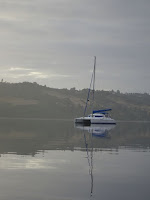 We arrived back at the dinghy after the tide had fallen A LOT. The range here is five meters (16 feet). After putting everything together, we were faced with dragging the Pudgy four times that far over stones and seaweed to get to the water. Just as we were starting the big lift and drag, a local man (meaning drunk - A local drunk), came over and introduced himself. While he stood in my path, blabbering, Maryanne dragged the dinghy halfway to the water. I kept trying to indicate that it was not proper for me to let her do it all by herself, but the guy had the expected attention span and tendency to ramble on.

It was an uncomfortable situation. He was acting friendly, but we kept waiting for him to reveal what he really wanted. It was hard to tell, because he wasn't speaking clearly, but it seemed he was trying to tell us he had spent a lot of time on boats and wanted either to crew on ours or to be appointed watchman. In the end, he waded up to his knees helping us launch and I felt a little guilty not giving a few pesos for unnecessarily getting his feet wet on our behalf.

I was having a lovely deep sleep when we heard banging in the side of the hull. It was the same sound our dinghy makes sometimes, so I initially paid it no heed. Then I remembered I had hoisted our dinghy just to keep it from doing so. Next came the sound of footsteps and Maryanne startled me out of my half-sleep by announcing that there was somebody on our boat. Adrenaline kicked in and we were both wide awake. She turned on the cockpit light and started knocking on the window and shouting aggressively. As I got dressed, she had a peek outside and said she could see someone out there (now leaving our boat). I came booming out of the cabin with our brightest spotlight just after the guy left. There was a rowboat with two aboard. Neither looked up when I shone the light on them, but the guy rowing raised an arm and said something in Spanish that I couldn't discern, but the gist of which seemed to be, “No problem, mistake.” He rowed away not like someone who was caught trying to steal something, but like someone who had dialed the wrong number. We were the only sailboat anchored in front of the town and they were clearly looking to help themselves to whatever they could find. They knew our dinghy was up and that we wouldn't be able to pursue them, so they left at a nice leisurely pace with no sense of urgency whatsoever, disappearing into the darkness and fog.

Maryanne called the Armada and tried her best to be understood, but neither side could understand the other, so eventually we both just gave up. After not hearing from them for a while, three uniformed men showed up in a RIB to help. We did our best to tell them what happened. I even pointed out the boot prints of the guy that boarded, who was apparently thwarted by our lifelines and our preventer tackle. If he had boarded the other side, I might have ended up having to confront him at the cabin door in the cockpit. They conducted a search and found the boat, but not the men. Boats get “borrowed” all of the time, so it was not likely the owner, a well-equipped fishing boat. We never made it to sleep after that, so I guess you could say they at least stole a good night's sleep from us. We don't think the drunk on shore the previous night was involved in any way.

We had reserved a rental car the next morning, but our new first task became going to the Armada to make a report. The kid at the desk turned out to be one of the guys who came to the boat in the wee hours. He said something we couldn't understand, so he entered it into Google Translate in his computer and turned the screen to show us. “If it happens again, call us any time. We will be right there”. I almost cried at his kindness. He also assured us that this was not normal in Castro. {Maryanne: We had already been warned that this whole area of Puerto Montt and Chiloe was a little prone to opportunistic petty theft, and to keep any loose items inside the boat if we left it unattended. These are standard basic precautions and nothing specific about being in Chile (there are plenty of places in the USA and beyond where these are standard measures. Leaving your boat is akin to leaving your car - there are some places where you are comfortable leaving it unlocked and some where you want to hide any items under the seats and double check the doors are locked. Despite being boarded at night, we really felt at no personal threat. It seems they believed the boat was completely unattended and they were totally shocked to find someone was actually aboard. Here we seem rich, and very few of the local boats even have engines. In fact we've seen plenty of 'tenders' that are little more than a shaped bit of Styrofoam and a wooden paddle, it isn't surprising that someone might want to 'borrow' a bit of rope if they think they can get away with it.}

We had planned to spend two more nights in Castro, but we no longer felt safe, so we decided to go the next day. Before we did that, though, we had a day's tour of the north end of Chiloe.