[Kyle]Our light tailwind was still there in the morning on leaving Caguache, and we were looking forward to another nice clear day of easy sailing. Maryanne pulled up the anchor. Just as it was making its final 'clunk' over the anchor roller, she let out a half yell/half gasp that made me think she had hurt herself. I asked what was wrong and she could only say, “Come up here!”

She was unharmed, thankfully. Instead, I arrived to find our anchor windlass had just fallen off its mounting. The anchor was teetering on the roller, the chain was still on the gypsy (the indented pulley the chain passes over), but the windlass was lying on its front. The whole mess looked like it was about to give way. The anchor and chain would go overboard. The windlass wouldn't fit through the hole, so it would just slam around like a loose bowling ball propelled by contact with the zinging chain.

Maryanne got a hook on the chain and I unwrapped the gypsy. It appears the threaded corners of the housing on the windlass where the mounting bolts attach had finally corroded through. The last bit of force lifting the anchor over the roller must've pulled it off of the last bolt.

Jeez! Well, that pretty much wrecked our day! The windlass can be used manually if the motor fails, but there's nothing that can be done if the whole mess isn't bolted in place, except raise and lower the anchor and chain hand over hand. Our ground tackle is much too heavy for that.

We knew we would need some time to figure out what to do, so we tried to just put it out of our minds and enjoy the sail. It really was fantastic sailing. It didn't work. I tried being grateful that it happened right when it did, when there was almost no strain on the system. Any other time, even only a few seconds earlier, and it would have been a lot worse. That only helped a little. Windlasses are expensive and probably really hard to get down here and we basically can't anchor without one. Ours seems too far gone to repair, so we are in a really unexpected and unpleasant bind.

We were hoping to be able to find an empty mooring ball at Mechuque, our next stop. There were a couple in the small harbor, but it seemed unlikely they didn't belong to local fishing boats that were out for the day. We had originally planned on staying a couple of nights and then moving to a different anchorage that offered better protection from some bad weather expected in a couple of days. We decided to head over there instead for the whole stay, just to reduce the number of times we would have to deploy the anchor. We nudged Begonia up as far into the shallows as we dared. And then I did the hand over hand thing to get the anchor down, which turned out to be less difficult than I had feared. Luckily, it held fast the first time and didn't need to be pulled up and reset. 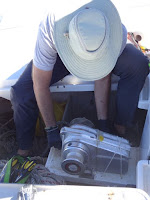 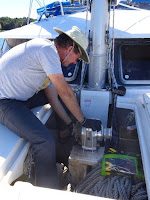 A temporary Fix for the windlass

We had a good look at the windlass and decided we could perform a temporary repair that should get it working again for a few more uses by lashing it down using some high-strength, low-stretch line fed through a few holes that would have to be drilled. Man, I hate drilling holes in the boat.

Before we started, we finished up the checklist so that wouldn't also be hanging over our heads. As I was inspecting the rig with the binoculars, I saw what looked like a broken strand in our starboard shroud. Oh, boy! I wanted to go up and make sure it was really nothing, but we decided to get the windlass repair done first. It came out much better than I expected. The line actually has a higher total tensile strength than the bolts it replaced and the whole arrangement feels pretty solid. We gave it a good test, even having it pull Begonia up to the anchor without actually breaking it free and pulling it aboard. It vibrates a little more than when it was bolted down, but shows no sign of wanting to give way. It should get us out of here and hopefully through a handful more anchorages before we can have a replacement fitted. It's always something..

Which brings us to the rig. I went up there to allay my fears. That didn't work either. It wasn't a trick of the light. We had not one, but two broken strands on that shroud. Crap! I had been up there in Quintupeu and check it with binoculars every day of sailing, so I knew the failure was recent. The affected strands are difficult to see except in just the right light, so it didn't necessarily give way on our last easy sails. I suspect it was that awful day with triple the expected winds and no sea room for reefing. 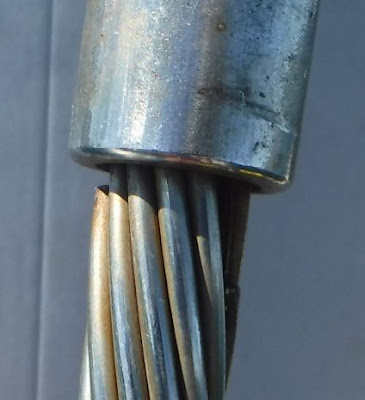 I was amazed that Kyle spotted this with the binoculars - you can just see a strand to the left has a gap, and a longer one to the right

Like the windlass, the shroud has to be replaced before we do any serious sailing again. It would probably be fine, but now we don't feel comfortable sailing on a starboard tack except in only the lightest winds. We don't want to put any unnecessary strain on the remaining 17 strands in that shroud. Replacing the shroud is a relatively easy job and can even be done with the mast up. The hard part will be sourcing a quality replacement parts and locating someone to do the job. I'm sure the job is within our skill set, but if it's possible to locate an experienced professional, we don't mind paying a little extra for the expertise. The rig is an important part of the boat.

Just read this for a second time to be sure I understand the issues. Can’t tell you how much I appreciate the expertise you both have. These problems would no doubt be very serious if overlooked. Sending love.