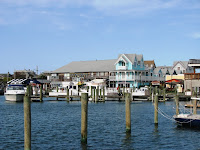 [Maryanne]Martha's Vineyard was known even to me, a Brit, well before I ever came to America, I seemed I'd always known about it. Now were were here. We arrived and anchored in Lake Tashmoo, and despite the early season, there were more boats here than we had seen in other harbours. We walked the short walk into Vineyard Haven and looked into the houses as we passed; some were old, some very modern; some large, some smaller. We arrived in Vineyard Haven on Church Street, and turned onto Main St - full of small shops, mostly touristy but without any of the usual tacky nature. Even the bank fitted into the area being small, stone built and with flower vines growing over the facade. We purchased cakes from a small bakery and watched the world go by for a while.

We were surprised to find it so busy with tourists (I can't imagine what this place is like in the middle of the summer season!). Nowhere we visited here seemed snooty in any way, but very homely, nice. The Vineyard Haven/Tisbury Harbor was quite full - plenty of boats (again!), and lots of moorings - I doubt we would have been able to anchor here, and there is also a ferry terminal which seemed to constantly be delivering new tourists/visitors/locals both on car and on foot.

We walked onward, the 3 miles to Oak Bluffs, and along the way passed by quiet, beautiful beaches. Oak Bluffs originally started out as an annual Christian camp site, but as people returned each year, small houses were built, all quite distinctive "Gingerbread houses". Every turn off to a side street brings new treasures so we explored, and found ourselves in a nice pub (The Offshore Ale House) for lunch. Many of the towns on the island are "dry" - but Oak Bluffs is not, and the pub brewed its own beers (Kyle was happy). I liked it as it provided a visual sensory overload: old boats, the brewing vats, peanut shells on the floor, etc. Along with dinner we had a fantastic clam chowder. After the fact, we discovered this pub is well rated by the Times of London, and even Zagat's. Strangely this harbor had not yet put out it's mooring balls, and apart from a few local work boats, and one cruiser sheltering from the forecast blow, it was quite empty.

Although we had imagined such a picturesque and expensive area would have mainly older tourists and couples, we were surprised at the number of college kid groups holidaying here - there seems to be quite a business in renting cycles and mopeds and everyone seemed to be having fun just being here.

The whole time I was there I felt like a kid in a sweet shop / candy store - I WAS IN MARTHA'S VINEYARD (cool enough) and WE SAILED HERE - Wow. It feels like we are really living that dream.
Posted by SV-Footprint at 11:11:00 AM

Okay, I admit it: I'm old, half-blind, it turns out, and straining to see the tiny little photos you post with your blog entries. I would love to see more of your photos of Martha's Vineyard and surrounds--are you posting them somewhere else, or can you post larger images in the blog (for the Senior Citizens)? I worry about you in the bad weather reported right now. Stay dry and well, and of course, keep posting!

:-) Click on any picture, to see a larger version! I don't post the full size pictures, but certainly larger than the ones in the blog text.... Yes there are other pictures too, but we have not yet put them anywhere else... Will try when time allows

I have fantatic memories of spending my summers on Martha's Vineyard, so I'm so happy to hear you enjoyed your stay there. I remember going to Oak Bluffs for Illumination Night where the residents of the gingerbread houses hang Japanese lanterns on their porches - and the country's oldest merry-go-round, which may not be there anymore...? There was a real brass ring you could try and snag! Will you pass back through in September, do you think?