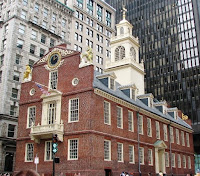 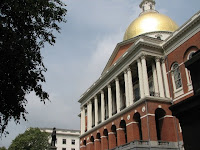 [Maryanne]At last! We actually got into Boston as tourists. We have a list of things we want to do in Boston, but we thought we would start with a little overview and orientation - and the well marked Freedom Trail, starting at the Boston Common, seemed to serve just that purpose.

To be fair, some of the sights on the freedom trail are a little lame, it's heavy on the cemeteries, and on the "here once was something interesting/historic" type of thing, but there are also some really well presented historical sites. Some charge a small entry fee for very little, while others give excellent free tours (and everything in between). We had all day and I learned a lot more American history.

For those non-Americans (or non-historically minded) that read the blog, Boston was the arrival port for many early immigrants (I believe, on an almost equal par with New York). Many of the key players in the fight for independence from Britain were active here, and unlike many US cities, many of its older buildings were understood to hold historical significance and "saved" in the 1800's; so we can enjoy them today. Boston was also an early leader in the anti-slavery movement.

Although the trail itself was themed on America's freedom from Britain, the sites often covered general Bostonian history. As we find in so many American historical sites there was no time or space given to the Native Americans themselves. Nope! American History apparently began with the great white European invasion!

You can walk the route yourselves, or take a guided tour by a dandy gent in costume. Because we turned up on a Saturday the guided tours were over crowded, and we decided to go it alone; and because it was so crowded, naturally we bumped into the guided tour at many of the trail sites.

We took a few side attractions not officially on the trail, and were glad we did. The first was to the very grand entrance and reception of the Omni Parker House Hotel (where the likes of Charles Dickens have stayed). We also detoured to the The New England Holocaust Memorial, a thought invoking memorial that (as my guidebook state) gives "an unusual degree of attention to its non-Jewish victims". A lighter detour was to Quincy Market is a wonderful old brick market hall (now converted into a very commercial food court); it was packed solid with people. Outside there were street performers, and lots of action going along - the kind of place you can sit for a while and enjoy the chaos. We didn't eat there, thunderstorms were brewing and we were saving ourselves for a nice meal in a proper restaurant.

We had a good time and ended the tour in the North end (missing the last 2 official stops that were just a little to far for the time we had). The North End is the Italian quarter of Boston - and of course we stuffed ourselves with a great Italian meal. There were plenty of restaurants to choose from; we think we lucked out when we picked La Famiglia Giorgio's and had what was possibly the best Italian food I have ever experienced (in the USA or Italy).

I won't go into details about all the stops on the tour, however we both particularly enjoyed seeing Paul Revere's House, we learned lots about grave stones (and why we saw so many skulls on them), and of all the Churches appreciated the excellent presentation in the Old North Church, along with the pirated cherubs surrounding its organ. 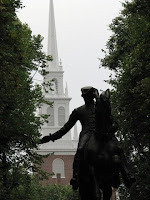 We plan to go back to the Massachusetts State House on a week day when we can actually enter the building; for some reason the free guided tour does not run on the weekend (when all the tourists come!). We also hope to see the Aquarium, and possibly the USS Constitution, and the Boston Tea Party museum on our next trip into the city. 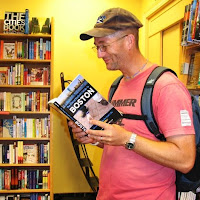 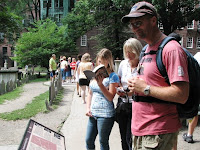 Other comments from our tour day: 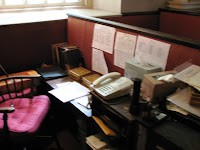 Finally, Finally! A day you have waited for. When I visited Boston, I loved Paul Revere's house too, but remember it had very low ceilings, steep narrow stairs and seemed about 3/4 size by today's standards. Are we really that much larger today? With all your repairs and mends and Kyle dangling from the chair while passersby wonder how much you have to pay him for his work, this sounds like a wonderful respite, and well-deserved. As always I am delighted by your tales, your wittiness and the window into your world.

Okay, remind me again why all the old headstones have skulls on them and the difference between the skulls and the angels..tease!

Oh yes, one more comment--we seem to think history started with COLONIAL America, when the people who look like us arrived on the shores of the "new world" which of course wasn't the least bit new to the natives who inhabited it for millennia. Until we understand how we overtook this country (by force) and that we do not have some god-given right to it, we will not realize it can also be taken from us. And perhaps it already has been. .... There I go again ;-)

HI Carla, I see you had some time to read the blog!

I said we learned, NOT that I remembered about the headstones.. Here is a web site that explains it, but basically you can pretty much date the era of the headstone by the pictures on it. The early puritans had the starker Skull icons.

Oh, I wish that picture of Kyle reading the book was just a bit sharper in focus - the title is perfect! (for what reason I'll decline to say, hehehe) Your tour day sounds brilliant and - as always - makes me want to visit those same places. Mostly so I can gawk at the horse statues' privates... you did say pretty good, right? Or, er, [lightbulb], you probably just meant their accuracy was pretty good... ha! Of course. I knew that's what you meant.

Oh, I wish that picture of Kyle reading the book was just a bit sharper in focus - the title is perfect! (for what reason I'll decline to say, hehehe) Your tour day sounds brilliant and - as always - makes me want to visit those same places. Mostly so I can gawk at the horse statues' privates... you did say pretty good, right? Or, er, [lightbulb], you probably just meant their accuracy was pretty good... ha! Of course. I knew that's what you meant.