[Maryanne]After our amazing welcome from Geoffrey and Mary (owners of the Gemini Happy Cat) on our arrival, we were invited for dinner and a sail. Along the way Geoffrey and Mary also gifted us freshly baked brownies for the trip, Bermuda Onions right out of their garden for our provisioning, and a million helpful hints and friendly smiles – we could not have been treated better.

Dinner on Friday evening at their beautiful home was delicious fresh wahoo (Geoffrey had read my blog and my frustrations at finding good fish in the islands, so it was an extra special treat). We ate on their patio, raised on a hill, with a view of the bay below and the Gibbs Hill light in the background – stunning! Also invited was one of their friends and neighbours – Paulina, who had just sailed up from the Caribbean recently herself. Mary and Paulina are heavily involved in the Tall Ships Race which is very soon to descend upon Bermuda, and will (eventually) end in Ireland (although they won’t take the direct route we are planning). Kyle and Geoffrey started the evening with a walk down to the beach for a swim amidst some nice coral and a few serving platter sized fish with the dog, while I lazed around the patio reading magazines (tough life), we ended the evening with Ti Punches, and slept well in a real bed.

The following morning Mary took me to the farmers market where I was guaranteed some really fresh, organic, locally grown produce (including free range chicken – a real treat). I picked up a number of good looking vegetables and some locally made honey too. We also swung by a marine store for one last item I’d been looking for – oh how easy shopping is with a car and someone who knows where everything is.

Eventually we were all ready to go sailing, and Geoffrey’s friend and college Ross joined us (visiting Bermuda from Toronto). Happy cat is out on a mooring, so we drove to the boat club, climbed in the large dingy (actually tied in its own dock) and pottered over to Happy Cat with our provisions and picnic for the day. Happy Cat has empty lockers, and floats much higher in the water than Footprint, – it seemed so much more spacious and we took the chance to have a good tour. Unfortunately, it had also been recently serviced, and it appears that insufficient (if any) oil was returned to the drive leg – Happy Cat was not going anywhere, but at least we did get to see her. We felt terrible for Geoffrey, but he seemed to take it in pretty good stride.

Quick change of plan! Geoffrey wanted to know all the places we’d intended to visit by bus later, and decided to drive us all over the island to ensure we got to see them.

We left Mary at the house as she still had some work to do – the tall ships are on their way here as we speak, and the four of us went for a drive along the beautiful south shore of Hamilton Island, the main island of Bermuda. Bermuda has done a wonderful job of protecting the beauty of its south shore beaches. There is about a half mile barrier of hilly parkland that abuts the actual beaches themselves, which gives the beaches a much more quiet and rural feeling than you would expect from being only a couple of miles from town. Geoffrey stopped at a few different places that gave us stunning views of the cliffs and the beaches behind. We made a special stop at Horseshoe Bay, with its stunning wide fine pink sand beach and surrounding rock formations. Kate, you’re right, it is a very pretty beach. Kyle had his usual crazy scramble up and down rocks and into caves looking for good photo opportunities while the rest of us walked along the soft pink sand and talked. 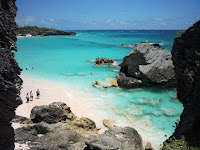 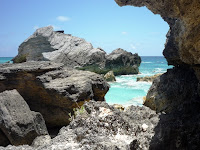 Horseshoe Bay, unfortunately we didn't get a good shot of the huge, beautiful beach, but these give a hint of the fantastic bay

After that, we went to the Gibbs Hill Lighthouse, the first sight most visiting sailors see of Bermuda - including us. The repeater station on the top also provided our first contact with Bermuda Radio. We climbed the stairs to the top. At 108M (354 ft), we had views of the entire country. The light was built out of cast iron as the local limestone was not considered strong enough to support such a tall structure. It has been operating continuously since May 1846. 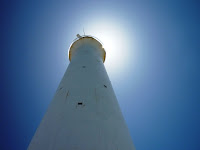 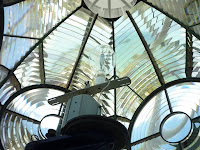 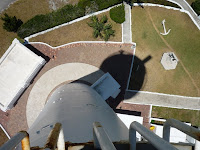 Gibbs Hill Light - In the photo from the top, you can see Kyle's shadow as he leans over the rail for the shot - Yikes

From the lighthouse, we headed for the Dockyard on the tip of Ireland Island, the westernmost island of Bermuda. On the way, we passed the Somerset Bridge – with the smallest drawbridge in the world, allowing small (unstayed – no wires) sailboat masts to pass between Somerset Island and Hamilton Island. It must have been a real time saver back in the days before most boats had motors that could take them the long way around. 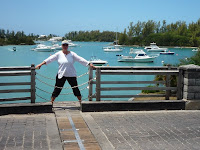 Somerset Bridge with its tiny draw bridge (so small you just lift it up by hand!)

At The Dockyard (on Ireland Island) , we were lucky for two reasons. The first was that there were NO cruise ships in the entire country that day. The evening before, as our ferry stopped at the Dockyard on the way to Hamilton, two huge cruise ships with over 5000 passengers were berthed there. They were both leaving that evening and it looked like closing time at Disneyland with crowds and crowds of people all walking in the same direction. This day, we had the place virtually to ourselves, maybe a few hundred people total. The other reason we were lucky was that we were with Geoffrey. He grew up in Bermuda and he seemed to know everybody as well as everything about Bermuda. For him, the history of Bermuda is also his history. He knew it very well and we couldn’t have asked for a better tour guide. 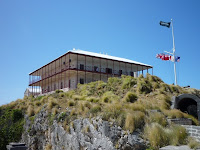 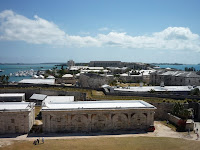 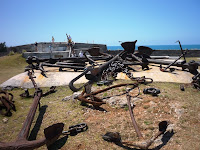 The Dockyard is a major fortified British Naval complex from the early 1800’s, protecting the whole West end of Bermuda. It served as both an armed fort and a prisoner of war camp for English, Bermudian, Canadian and American forces until just recently. Geoffrey had a little fun with Ross by explaining to us that the Canadians tried to convince their government that Bermuda was a hardship posting so they would be ‘forced’ to stay.

All this followed by a drive along the various coastal roads we’d otherwise missed gave us a complete view of the island through windy, stone wall-edged roads and past Bermudian houses that all look like big, over-sweet wedding cakes that you could slice a corner off and eat. We still can’t help but be in love with Bermuda, and honestly can’t thank Geoffrey and Mary enough for their wonderful hospitality.

On return, we saw our friends on My Tina at the customs dock. We thought perhaps they were checking out, but it turned out they were returning after a day at sea and discovering a problem with their roller furling. We have the same make (different, newer model) with manuals aboard Footprint, and told them once they were anchored safely to just pop over and they could take a look. They were in surprising good spirits after an aborted crossing, and we were happy to help them in any way we could. We were amused at their surprise when we cut them a disc of the manual, AND photocopied some of the more relevant pages for them. The next day, with the help of the manual, they found the problem, a broken part. They seemed happy to finally know what was wrong even though they’re going to have to wait for the end of the holiday for the part. They also are going to have to remove their forestay to install it but they swear they’ll only be a couple of hours behind us. 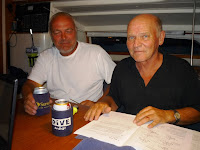 The following day we were back to chores – final preparation for the next passage. We topped up fuel and water, setup the boat ready for off shore (jack lines, tethers, etc) and later in the day Kyle collected Geoffrey and Mary on our little Portland pudgy and rowed them back to Footprint for a quick tour. Since Footprint is fully loaded for the next passage, she is not in her best show condition, but Geoffrey and Mary were great company and were keen to see all the little additions we’d made to the boat. 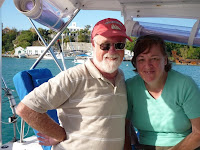 
After that, we went and got tokens for one last shower and load of laundry before we set off. In the afternoon, there’s the big 400th Bermuda Day parade to see. We figure we really shouldn’t miss that. We’re not likely to be around for the 500th.
Posted by SV-Footprint at 8:58:00 AM

Email ThisBlogThis!Share to TwitterShare to FacebookShare to Pinterest
Labels: Bermuda

So tomorrow is the big day. I know you have planned and trained and fretted and fixed a good long time to make this crossing and I am trusting all that experience and knowledge to bring you through safely to the green shores of Ireland. Above all else, please take care of each other and know you are mightily worried over back here on land.
Wishing you fair winds, a following sea, dolphins in your wake and a zillion stars to guide you through.
....So proud of you both!