[Kyle]After Castletownshend, we upped anchor around noon (for the tide) for the 27NM trip to our next destination: Courtmacsherry. The wind had calmed down quite a bit since the day before and was now mostly just below 10 knots from the SE. This put us close hauled to the wind for the whole way, but since the seas were flat, it wasn’t bad at all. The wind was just a little bit too close to our destination for us to go directly and we did have to tack back and forth a bit, spending a couple of hours on one tack and then as we gradually got too near shore, we’d spend half an hour on the other one until we were out far enough to repeat.

I had been really looking forward to Courtmacsherry. Our sailing guide has directions for navigating the tricky harbour entrance and said a couple of sentences about it being a nice village – pretty much the same it says about most places. Our other travel guides don’t mention it at all, which I took to be a good sign. I like discovering things off the beaten path.

The main difficulty with Courtmacsherry Harbour is that almost all of it dries out completely at low tide, leaving very little of the harbour where boats could remain afloat for the entire tidal cycle. Since Footprint is not a tippy boat, we should be able to take the ground better than most others, but being unfamiliar with the harbour, we didn’t want to risk being set down upon an errant rock, so we were keen to remain afloat ourselves. We arrived right at high tide near sunset, which gave us lots of maneuvering room to find a suitable spot. As in lots of places, nearly every bit of usable space was packed with moorings. After much searching around and a few failed attempts (as it started to rain), we did just manage to squeeze in between a couple of moorings far from the town quay. We would not be going ashore. Once the tide started going out, huge mats of smelly seaweed came zinging by the boat in a fast current, piling up on everything exposed. The prevailing wind also brought in the smell from a nearby stockyard. Lovely! I suppose we’ll be sleeping with the hatches closed, then. 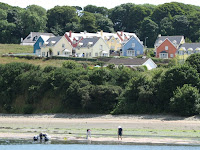 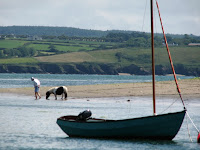 The next morning, at slack tide (no seaweed), in the sunshine, I began to feel a little guilty about thinking all of the unflattering things that I had the previous night about the place. There were kids launching their sailing dinghies, people fishing and even one guy taking his pony for a walk along the beach. Still, we needed to get moving as the tide waits for no one. Pulling up the anchor also pulled up hundreds of pounds of seaweed that had to be stabbed at with the boat hook and then clawed at with bare hands in order to let the chain come aboard freely, leaving the deck covered in ‘lettuce’. So I guess I’m back to not liking the place again.
We had a repeat of the previous day’s sailing conditions for the 20 mile trip to Kinsale. 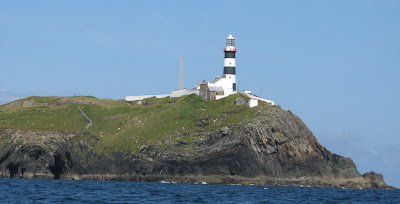 We were able to get up very close to the beautiful lighthouse at The Old Head of Kinsale (before tacking and getting out of there) on the way and were surprised to see two guys out fishing in a small inflatable right off the rocky point.

Dinghy fishing Waaaay out to sea!!, and more traditional fishing and farming in Irish waters

We had one more surprise waiting for us, though. After we furled the sails and were heading into the harbour at Kinsale, we came upon a virtual raft of seagulls. Scanning the area, I noticed a large fin in the water. I took Footprint out of gear and we coasted up to see two huge (10’-12’) sharks among the birds. They seemed pretty unconcerned with us and we were able to get right up next to one of them. It turned out to be a Basking Shark. These big fish swim around with their huge mouths open and just scoop up whatever is in their path. The water here was full of jellyfish and several schools of smaller fish (explaining the seagulls). We spent a long time trying to get a good picture but eventually gave up as the light was from a bad angle and the reflection/distortion from the water was bad.

Once we got up the river to Kinsale, we found the same problem with the moorings. Eventually, we found a nice, pretty spot just up the river from the town but it took us five tries on the anchor before we could get it stick adequately in the hard clay. Maryanne, at the bow for the first, second, third and fifth tries just took it in stride and kept hauling and setting, hauling and setting without complaint as she always does. She says she prefers that I find the spot and keep from hitting things while she’s up there working. I suspect it also has something to do with all of the sympathy she gets when we meet other people. On most other boats, the person at the bow actually has the easy job because all they have to do is operate the button for the electric windlass.
Posted by SV-Footprint at 9:00:00 PM

Swimming with the sharks, huh? Is there NOTHING you won't do for attention? Well, okay, these may not be all that dangerous, but they sure are plentiful. The photos are gorgeous. Good thing for the backup camera.