Weather: Rain on and off yesterday, but now dry, sun peaking through gaps in clouds, still cold

General Comments: Kyle has lots to say, so I'll be brief: Things are definitely feeling colder (16C feels cold to us, and there are big winds to make it feel even colder), Kyle added a 2nd quilt to the bed for us. I had a hint of an ear infection (not sure how/where from) and decided to self medicate before things got painful (all is better already). We have a huge medical kit put together after a LOT of research and with help from our Dr. We have a few catch phrases in regular use on this trip.  Before Kyle goes to bed on his off watch he'll say "Don't hit that ship!" and I'll reply "Which one"....Of course we haven't seen a ship in days (weeks?). After yesterday's storm (not too bad) passed, Kyle assured me that was it, we should have winds in the teens now all the way to Ireland (as long as we didn't get delayed and got caught up in yet another predicted front coming later. That was a huge relief to hear. So when Kyle went to bed last night and I find myself putting a second reef in the main (already the genoa was furled) and then deciding that even that was too much sail (regular 35 knot winds and 42 kt gusts), I was not happy with the weather forecasters. I was happy, however, to hand over my watch to Kyle at 3am GMT this morning. Amazingly, I slept really well too. We are still (obviously) hand steering and waves and wind are such that we dare not spare a moment's inattention of the helm. During yesterday's calm, when we thought we had easy sailing the rest of the way, a full rainbow appeared with one end clearly set over Ireland - a good omen (we hoped). 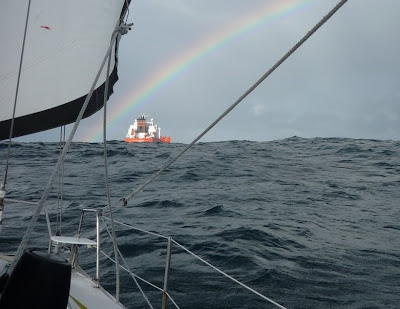 Rainbow ahead - setting the path to Ireland - oh and a big ship...

[Kyle]Yesterday's storm was short lived with lots of rain but it did clear up just as Maryanne came on watch and the wind shifted to a nice tailwind with following seas for dinner.  The skies cleared up and a rainbow came out - lovely!  Bad weather - Done :-).  After dinner, the seas started to build and got quite large but manageable and I handed over the watch to Maryanne.  Later last night at what I thought was 15 minutes before my watch was due, but was actually 2 hours prior to that, I woke up to a strange boat motion and the sound of a howling wind over the boat - even louder than the usual stuff.  At first I thought, "I'll wait, she'll call me in 15 minutes anyway", but when I realized my error on the time I got up to see what was going on.  Maryanne was concentrating INTENTLY on the instruments trying to keep the boat straight in what had built to about 20' seas and 40kt winds. We both agreed it was time to switch tactics (probably past time) and heave to instead. I went back to bed. Maryanne had wanted to pull down the sail and run under bare poles and after a few minutes I decided that was probably better to protect our main. Poor Maryanne - up she went to wrestle the sail down and lash it to the boom, while I lay in bed comfy and cozy under two quilts (I only felt a bit guilty). The boat is very stable, keeping the wind to one side under bare poles, but Maryanne was not able to get the boat to steer to get us to run down wind (but we drifted in the right direction anyway).  {Maryanne: I didn't like this much either as it left us beam to the waves}. [Kyle]The boat was comfortable and stable ahull, but we did take one big wave which rocked us and left us each checking the other was OK (and then that the boat was OK). We left the boat that way until Maryanne handed over to me for my watch, at which point the winds were still gusting in the 40's. I decided to try steering under bare poles - it occurred to me that If I put a board down it may give a pivot point to help steering. While having coffee, I was able to sail the boat under bare poles at about 4-6kt.

By then, the wind was starting to die down further and I was considering putting the main up (double reefed) in an attempt to steer/drive the boat, but before I did I decided to round the boat back up into the wind to take the time to do the coffee dishes, tidy up, etc. I put on some warm clothes and went out into the cockpit to pump the bilges with the manual pump. About a minute later I heard a loud hiss, and I had just enough time to jump up to the far corner step as a BIG wave broke over the boat.  It popped the snaps off the side enclosure and filled the cockpit to about 12" high.   The water rolled over to my side of the cockpit and drenched me below the waist: so now all the nice warm clothes I was planning to wear under my foul weather gear were wet - I needed a complete change of wardrobe. Once I had on the full Earnest Shackleton head to toe foul weather gear (properly dressed this time) I crawled up to the mast to raise the sail (leaving it double reefed). As I was about to hoist, I noticed the cover on the halyard line had chafed through (where it passes through the sheave at the top of the mast)... I spent some time checking over the length of line that was visible and it seemed OK otherwise. I was able to shorten the halyard by a foot. As I went to reattach it to the shackle on top of the main sail, I noticed the halyard was missing.

Usually, when we put the sail down we pass the halyard over a lower horn on one of the cleats, so that pulling on the halyard pulls the sail further down and prevents it from accidentally raising itself.  Even though I knew this from doing it 100's of times, for some reason I had thought it was cleated as I cut the line, and It didn't occur to me until I could not find the halyard; I looked to the top of the mast .... "Oh,"... I said as I watched it streaming downwind - "that ain't good".   The halyard streamed practically horizontally and 40' up in the air, but since the waves were so huge (luckily?), when the boat would get rolled by a wave, and with a slight temporary lull in the wind, the halyard would whip back towards the boat and temporarily wrap around some of the rigging. After several comic attempts at catching hold of it (including one time when it hit me on my hat), an hour later I was finally able to recover it with one foot on the mast winch, one on the boom, one arm clutching the mast tightly and the other waving a boat hook around. {Maryanne: This is the first I've heard of this, I was sound asleep, and would not have been too happy.... the best solution I've ever seen to recover a lost halyard is a slingshot type mechanism. There is no way I could have watched Kyle do this in those seas/conditions, but he is busy assuring me he was clipped in at 2 points, and is very proud of himself}.

Having recovered the halyard, I then only had the slightly less complicated task of unwrapping it from all the rigging, which involved me crawling all over the boat moving my various attachment points. By now, the wind was down to low-mid 30's. I got the double reefed main up, and was finally able to drive the boat in the right direction, with some fast surfing down some big waves. At one point , we got to 12.2 kt. It was like cresting the hill on a roller coaster. The boat kept just pitching down and accelerating. By the time Maryanne came on for the morning chores, the waves were around 20' and some 25-30' (and all close together - a very mixed sea). When Maryanne popped her head out to see how I was doing, she had dinner plate eyes as she watched one of the waves behind bear over us (it passed with no impact). Hopefully, the last forecast will be true from now on... The barometer is slowly starting to climb, and seas do seem calmer - wind currently 28kt from the west and we are sailing about 120 degrees at about 6kt with 2 reefs in the main. (Max winds last night were 46kt)

Food: During the relative calm yesterday I made potato soup for us, the weather started to build as we ate it, and Kyle lost most of his seconds (spilled. He was not happy)

Hi You 2
Life is never dull out therefor you just keep in one piece and enjoy the time you have together Maryanne How are the bruises?
No time to feel sore