[Kyle]From our anchorage in Sausalito, we had a view of the whole western half of Angel Island. I kept looking at its peak, Mt. Livermore, and thinking we needed to get up there.

From a sunset view of Angel Island from Sausalito, we set sail via the Golden Gate Bridge, the swanky Tiburon neighborhood, and eventually to the dock at Angel Island

We left as soon as it was light out. The docks at Angel Island are open to visitors only for day use, so we were the third boat to arrive after another couple that had repositioned from the overnight moorings in the same bay. We paid the $15 fee for the day and then headed up the North Ridge trail.

It starts off with a long stretch of big steps that left us panting heavily at the top and with burning thighs. We were worried about what we’d feel like by the time we got to the top, but the trail mercifully shallowed out to a more manageable medium grade. 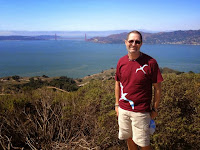 A hike up Mt. Livermore for more views of the Bay

We climbed through woods of conifers and eucalyptus before emerging to views of San Pablo Bay and Richmond. Coming further around the mountain, we saw Oakland, the Bay Bridge and then, finally, the San Francisco skyline.

It was a bright, sunny day. At the top, we could see almost the whole bay except for the very furthest reaches to the northeast and south.

We descended via the Sunset trail, which continued in our original clockwise direction around the island’s flanks. The Golden Gate bridge came into view, followed by Sausalito and Tiburon. The trail back down was much longer and therefore much shallower. I think next time we’ll do it the other way.

By the time we made it back to Begonia, our plan was to walk around the perimeter of the island along the paved road, but once we plunked down in the cockpit, we realized we just didn’t have it in us. Something for next time, I suppose.

We left the dock, rounded the northern tip of the island and dropped anchor at Quarry Beach, where we had a view of the Bay Bridge and San Francisco city for the night.

This is one of my favorite places....and you can stay overnight if you book one of the campsites. There are some wonderful old buildings, rich with history and very photographic on the northern side. Definitely get back out there!