[Kyle]The weather forecast for this leg had been causing us some concern. For most of the week before and after winds were forecast to be howling out of the north at a bit above our comfort level. The wind and seas weren’t so much our primary concern as being able to get out into the ocean across the Noyo River bar. The Noyo is very well protected (inside) but the entrance is narrow and notorious for being particularly dangerous in big swell. Inside everything is calm and sunny, even when ocean conditions are miserable with big seas, the river, with its protective cliffs and big bend just by the entrance protects us from any of that. The big winds forecast meant the swell would be in at least the 8-10ft range. We were hoping most of this would be dampened by the coastline and the intervening kelp fields but we were still worried.

To make things worse, when we tried to check conditions at the bar, the first thing that comes up on a Google search is a YouTube video showing local fishing boat being capsized at the entrance (and that is WITH local knowledge). It turned out that the bar report was not available on-line and the web cam set to view conditions was not working (bar report was available via phone call to the coastguard directly). We decided to go and take a look with the boat and make a decision to turn around if we didn’t like it on the day. It didn’t much matter either way (aside from the hassle of getting the boat underway) as there was much more to enjoy in the Fort Bragg area that we’d love to have time for, but we really ought to be getting on south if we can so Maryanne can interview for jobs.

The bar turned out to be calm, and crossing easy. We encountered some steep chop at the entrance to the bay, but only for a few minutes. The wind near the coast was almost non-existent and we had to motor almost five miles off shore before we could shut down the engines and begin to sail.

One bit of entertainment on the way out was watching a group (raft) of sea lions jostling for position atop one of the buoys. One buoy in particular had six in a space that would only fit 4 or 5, with 20 more in the water barking away and awaiting their chance for a place. The really like resting atop buoys, which seems strange given all the beaches and rocks nearby. Knowing their place, seagulls and cormorants occupy the top deck of the buoys (beside the solar panel).

Leaving the Noyo River, sea lions in line for their turn on the buoy

Once out in the wind we sailed for the rest of the day in only about half the wind that was forecast. We kept thinking we should shake out the reefs and fly full sail, but were worried about the wind suddenly appearing (as it did when we rounded Cape Mendocino en route to Fort Bragg). The timing of the tides for crossing the Noyo and the San Francisco Bars (in daylight) were such that we only needed an average speed of about 2.5 knots, so we were in no hurry. We were also lucky because the weather was uncharacteristically clear and we could see the cliffs and mountains of the coast the entire day (we even got a second look at Mendocino).

When Maryanne woke me at midnight for my watch it sounded as though we’d slowed down further; she told me to expect to be frustrated by the wind that had just begun to die. Ten minutes after she went to bed, I gybed, and 20 minutes after that I pulled down all the sails completely and reluctantly started the engine. Ten minutes later, the wind returned, only from completely the opposite direction - headwinds. Our one feeble motor was only able to make three knots against the wind and currents as we headed south. We continued this way for most of the day. The wind finally died down by late afternoon, allowing us to speed up, countered by us backing off on the engine rpm.

At midnight again on the second night we had only 16nm to go before reaching the bar so I was able to reduce power even further. While I’d slept, Maryanne had rounded Point Reyes. That meant now on watch, above the silhouette of the Marin headlands, I could see the top of the San Francisco skyline - including the south tower of the Golden Gate Bridge. At about 6am, just before sunrise, a light wind came in from the west and I was able to finally shut down the engine and let Maryanne sleep properly. Shipping traffic started to appear as we approached the San Francisco Bay shipping lanes and vessel separation schemes (which we were careful to avoid entering); I saw about five vessels going each way in about a 4 hour period. An under utilized pilot vessel seemed to mess with us. It kept relocating to a position directly in our path and forcing us to move. We’ve no idea why it acted in this way; we were outside of any shipping lanes, and clearly sailing (i.e. we had right of way). It had no obvious need to be ahead of us, and made no attempt to contact us on the radio. I was trying to let Maryanne sleep so I didn’t bother confronting him myself via radio, but simply kept diverting around him. If we are being generous, maybe he was curious about our boat, but it seemed more likely he was entertaining himself, inappropriately and at our expense.

Maryanne woke up just around 8am as we were turning inland to parallel the inbound shipping traffic lane to the Golden Gate Bridge. An announcement came over the VHF radio from the coastguard saying that the Napa lift bridge would be closed until further notice pending earthquake inspection. We weren’t planning on going that way, but our ears pricked up at the word ‘earthquake’. Maryanne did a quick search on her smart phone and discovered a 6.0 magnitude earthquake had hit the area about 3:20am – yikes. There were still fires raging, gas mains leaking and burst water pipes hampering firefighting. At sea earlier I had noticed a strange wake and been unable to determine the source – in hindsight this could well have been from the earthquakes and its aftershocks (but maybe not… I could just be making an association that wasn’t there).

I had expected when making this last leg of the journey that our Golden Gate Bridge story would end up being one of finding our way in by radar in the fog. We were lucky, and although there was a high overcast layer, the visibility was good and we had long views of the coastline all the way in.

Arriving at the Golden Gate Bridge, and anchoring in Sausalito

I cannot begin to tell how much pleasure it gave me to sail into San Francisco; it surprised even me. From the helm of Begonia I could see the motel where I spent my first night living in San Francisco with a U-Haul truck parked outside. I could see the beaches that I’d walked so many times, Golden Gate Park, the cliffs where I learned to paraglide, and of course, the Golden Gate Bridge itself that I have crossed so many times on foot, bicycle, rollerblade and car.

We sailed by Baker Beach, and childhood memories came flooding back; this was my first ever view of the ocean as a young child. I’d never before seen a body of water where I couldn’t also see the opposite shore. My Dad knelt beside me in the sand, looked out across the water with me and explained to me for the first time how big this ocean was – 100s of times further than I could see – to Japan on the other side. I was enthralled and terrified at the same time; one of those moments when my little childhood world got much, much larger. Now here I was, a grown man sailing his own boat past that very beach, not out of San Francisco to see the world, but into San Francisco after having sailed a very long way go get here! It is unbelievable to me every day that my life could ever have turned out like this.

We sailed under the big red “Golden Gate” bridge and for the first time in my life I looked up at it from the water instead of the other way around. People waving down to our little boat from above probably had no idea how momentous and emotional it was for me. They might have just imagined we’d poked out into the ocean to dip our bow into the Pacific waters and turned around. Still, it felt like a long road that had brought me back here to the place I first saw the ocean as a child.

The current assisted our ride under the bridge and we were able to turn and face it whilst still being pushed into the bay. Suddenly the sun burst out and the bay was alive with all sorts of traffic: ferries, sailboats and kayaks on the water, and traffic on the bridges and roads. We sailed into Richardson Bay and dropped anchor off Sausalito with views of Alcatraz, Angel Island, and the San Francisco skyline to admire; I could not believe we were actually here. Sausalito is where Maryanne and I spent our honeymoon and I remember watching the boats bobbing about from our hotel room window. So many memories are associated with this place, it’s going to be a great feeling of home for the next year or so. 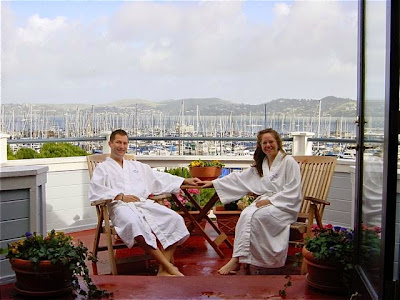 Bringing back memories form the past: Kyle and I start our first full day of married life from the balcony of our honeymoon suite in Sausolito
Posted by SV-Footprint at 11:57:00 PM

How touching this post is, Kyle--it even brings a lump to my own throat. San Francisco (and Mendocino as well) has the same effect on me. The emotional charge is surprising, powerful, a little confusing to my usually stable emotional rudder and even a little embarrassing if I'm in company as those memories flood in unabated. I love that you love it and it IS an amazing feat that you have come, in so many ways, full circle at your life from an angle you didn't expect. Hooray for you both!

I loved your post and read it with more than a touch of envy! I grew up in that area, and your pictures brought back so many memories of times spent all over doing so many things! Enjoy your stay there!