[Kyle]One of Maryanne’s little jokes that makes her chuckle to herself is her characterization of me as a train aficionado. She thinks she’s hilarious because the image she has in her mind is of me sitting at the edge of the tracks in a lawn chair under an umbrella dutifully writing down engine serial numbers and other impertinent minutiae on my little clipboard.

Hardee har har! I do not, and will never, do that.

That said. I do think trains are mildly cool. They are big, interesting pieces of machinery and I am interested in how most anything works. I also like that you can walk around on them when they are moving and that their tracks take up way less real estate than a big ugly road.

So, with that in mind, she booked us a couple of tickets on the Skunk Train, running from Fort Bragg to Northspur through the redwoods. {Maryanne: This was originally installed to bring lumber to the coast from the logging camps, it is quite the tourist highlight for the area, and with our timing there was only one option open to us which consisted of a return trip covering a full half of the track}

I tried to overcompensate by trying to be as ambivalent as a sullen teenager because I know she was watching me like a hawk for any signs of interest so she could start guffawing and making jokes about buying me train videos in the gift shop later. Then the train started moving and I may have let a crack of a smile cross my face. By the time we got to Northspur, I was singing along out loud with the guy playing train tunes on the guitar. Dammit! 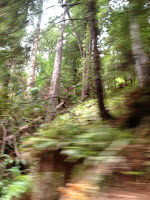 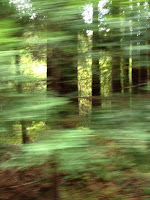 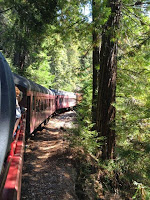 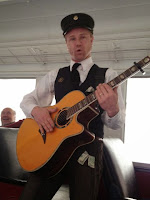 While rushing through the redwoods we are entertained not only with the views, but with a dining car/bar, a running commentary on the scenery, and the talented on-board minstrel

At Northspur, we got off for forty-five minutes. I was keen to see the old growth redwoods nearby and was dragging her behind me like a kid at an amusement park. I was taking pictures of trees and hugging trees (Oh, I do that!). I turned around to find HER taking pictures of the engine being moved to the other end for the return trip. Hmmm… 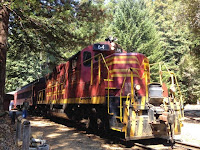 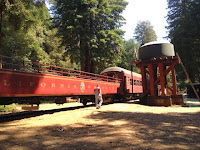 Enjoying the trees and the train at Northspur logging camp

On the way back to Fort Bragg, she let me have my way and we got to ride in the open car the whole way. The weather was perfect and warm and it was great to stand out under the open sky and smell the big trees as we trundled by.

Afterward, we had a look at a model railroad they have in a disused train barn out back. Pretty cool. It reminds me of what my parents did to my room after I left to keep me from moving back, only bigger.

We found a restaurant attached to the local brewery across the street and had a sampler. This one was all twelve of their beers. Twelve sample portions still works out to a lot of beer for such a long walk home. I think we would have been okay, but our server forgot our food order and apologized by comping us a beer. Oof! 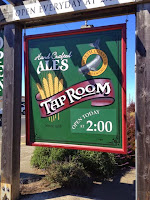 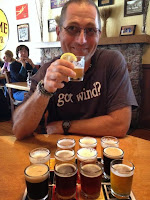 Relaxing with a sampler of local brewery offerings

Getting home wasn’t too bad. “Walking it off” had us feeling pretty human by the time we made it.

Maryanne! You didn't get a picture of KYLE singing with the train's onboard minstrel! Now that would be some good leverage for the future. What a fun trip - it all looks beautiful and I'm glad you managed to wrangle Kyle into it :

The Skunk Train--ah, yes, I remember it well. It's good you still have a liking for the charm of the trains, Kyle, as I always will. I loved this trip when I got to take it and can't think of a better way to spend a day. Bravo, Maryanne, for arranging it! We drove from Colorado to Ft. Bragg just to take that ride and I swear it was worth it.