[Kyle]For our first whole day in Brookings we set off in the general direction of town to see what’s around. With nothing in particular in mind we figured we’d simply enjoy the scenery along the way.

Many years ago I would occasionally fly freight into Brookings, so I had a passing familiarity with the place. It seems in the years since, the town hasn’t held up as well as I’d remembered. Don’t get me wrong, Brookings is a nice enough place, but I just remember it as being quaint and rustic back then, but to fair I was half asleep all the time.

Views from the 101 over Chetco River, Brookings

We started our exploration by making the uphill climb from the marina to cross the road bridge that takes US route 101 across the Chetco River. The marina was on the opposite side from town so the bridge couldn’t be avoided but the elevation provided spectacular views of the river valley and harbor. By the time we reached the other side of the bridge, and into town proper we were feeling a little puckish and stopped into the first coffee shop we saw where I had a delicious mocha and a giant and generous bowl of tortilla soup. Maryanne was given a cup of hot water for tea and a single slice of thin white bread toasted and cut in half. The poor woman looked quite the waif at my soup as she gnawed on the corners of her dry toast. {Maryanne: with our stove functioning down to just a single ring I can’t have toast aboard Begonia, so I’d really built up a craving for it. This was a really poor example of it that I could have done without, and it cost me almost as much as Kyle’s delicious soup. They didn’t even give me a knife for the butter! Sigh}

Back in the fresh air newly caffeinated and stuffed (at least one of us!), we spotted a brown tourist road sign directing us to Chetco Point and decided to amble in that direction. The route took us on back roads past industrial areas, non-descript apartment buildings and the generic edge of town stores. On about the 4th section of the route the signs vanished, and we were clearly not at any scenic outlook. We poked around a little and eventually found a gate chained shut with a sign saying the path to Chetco Point was closed (Sigh, again). By now our feet were feeling abused from the effort of walking after so long at sea, and Maryanne was not amused at so much effort for no reward. Back to the main road! Apart from the sea mist this part of Brookings was indistinguishable from any other American town. There was a big four-lane highway with few accommodations for pedestrians to either walk along or cross; either side lined with dated and dusty chain stores and strip malls. We kept passing places that seemed like they might have something or other we might ‘need’ for the boat, and we ended up spending more time that I would have cared to in hardware, electrical and grocery stores.

At the other edge of town we spotted a sign for a bicycle path that split away from the road headed into trees and a picturesque trail (finally!). Suddenly we were back in the nice part of Oregon, walking through woodland filled with the scent of pine and sea air. As an added bonus the trail was lined with loaded blackberry bushes and we were able to graze as we went along (giving us plenty of opportunity to rest our feet). A mile or so later we emerged from the trail into Harris Beach State Park perfectly swathed in a mist giving a dramatic sense to the already spectacular beach scene. We walked the trails and climbed the rocks and were amazed to see families playing in the surf of the frigid waters wearing swimsuits on such a cold and foggy day. We kept our distance from the ocean, remaining sensibly dry.

Realizing we’d gone as far as our abused feet could be expected to take us, we retraced our route along the bike path and this time encountered several groups of people picking blackberries. Maryanne’s favorite was a group of young siblings with loaded sand-castle buckets, one of which had failed to commit the perfect crime; his bucket was empty but his face was covered with the stains from those blackberries that didn’t make his mouth in the rush to eat them without his industrious sisters noticing.

Back in the strip mall zone, we passed the distance by ducking into one shop after another and purchasing those things we hadn’t wanted to carry any further than necessary. Knowing we are most likely back to living at the dock, we purchased a toaster so Maryanne can again have all the toast she wants (provided we are plugged into shore power), and we picked up some bagels, good bread, and English muffins to test it out! We finally made it back to Begonia loaded down with new purchases, declining any further excursions, we turned to Netflix for entertainment as our beleaguered feet got a well deserved rest.

After a good night’s sleep we set off to explore the marina side of the bridge (the unincorporated town of Harbor), but on closer inspection couldn’t identify anything of any interest so we decided to head back across the bridge for one of the parks we’d ignored earlier. On route through the harbor buildings we came across the chamber of commerce’s tourist information office and excitedly went in to seek guidance on how to fill our day. They started off by explaining all the great things there were to do provided you had a car (after we’d explained we were on foot after arriving by boat). Maryanne enquired about any buses? (Nope!), how about a rental car? (Nope!). Harris Beach (not the best, they assured us) was the only local thing. A second attendant arrived and was equally stumped as to what anyone would do in Brookings if they didn’t have a car to get out of it! Maryanne pushed: any museums? “Ah, yes, there are lots of galleries, you can go to such and such café, or the tattoo parlor they both have galleries you can view”. Hmmmm. So we decided to ignore them and stick to our plan to visit the nearby park (Azalea Park).

We’d seen signs from the road pointing to the Park, and indicating hiking trails. Unfortunately the hiking trails were at a second park (15miles further away), Azalea park was a couple of baseball fields and a small amphitheater and giant kids play area all set in beautiful woodland but easily walked in 10 minutes. We stretched out tour to 20 minutes with another meal of freshly picked blackberries and set off to return via what looked like a small café near the entrance ‘Capella by the sea’. As we got closer to this interesting building we could see the front doors wide open and what looked like pews within. This steep A frame building with all glass ends was beautiful but looked like a church rather than the hoped for café. It sat atop a ridge and surrounded by redwood trees. Once inside we learned that it was designed as a place for contemplation, built by a famous movie producer in memory of his wife who he missed dearly after she passed away. We’d stumbled on the Taj Mahal of Brookings. Inside were two people. One making use of the amazing setting engaged in quiet meditation/contemplation; the other, a volunteer, desperate to engage in excited conversation, instantly breaking the peaceful spell. Karen, the volunteer docent, was indeed an amazing person. She’d hiked around the Middle and Far East in her 20’s (having her children as she went), and been active in the wooden boat scene of the pacific North West, living aboard in Washington state for a while. The other lady quietly slipped out as Karen chatted away. After conversing for a while, we took our leave and went in search of a quiet road along the river valley (and more blackberries). As we left the park we notice that other woman, the one we’d seen enjoying the quiet of the Capella, enjoying the sunshine sat on the grass. 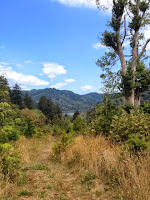 Our new trail took us to a few dead ends and eventually we acknowledged that our feet deserved a break and we made our way back home, rewarding ourselves with a Zola’s pizza and a Slug-and-Stone ice cream on the way – both were excellent. We also picked up some local smoked salmon and smoked halibut for future dining in, it would be a crime to leave Oregon without any salmon!

Zola's may look like a dive from the outside, but it is not to be missed!

The following morning, before departing Brookings, Maryanne dragged me back to the nearby seafood store for a meal of fish and chips to sustain us on the passage on to California.

Email ThisBlogThis!Share to TwitterShare to FacebookShare to Pinterest
Labels: USA-OR

You got me again! Mid-task, just trying to clear out my inbox and see if anything important was on fire and needing immediate attention, I heard loud sucking sounds as I started to read your latest blog entries. This is my best excuse for not finishing the day's tasks (that I lined up all by myself--no boss hovering, thank heavens)--getting sucked into the pure enjoyment of reading another of your blog posts. When I fail to give myself any time for a break, you nearly force me into it. Thanks for a great tour of Brookings! Keep it up.