[Kyle]It was such a nice morning the next day that we decided to reverse course and sail back to the Golden Gate Bridge before sailing along the San Francisco waterfront on the way to Oakland. 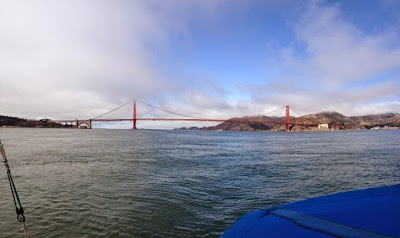 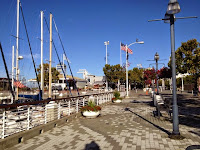 Sailing by San Francisco, Alcatraz Island, and the Port of Oakland to reach our (hoped for) Marina

We still weren’t sure where (or if) we would be tying up in Oakland. The harbormaster said vaguely that he had, “a couple of ideas..” We couldn’t get anything definitive out of him, but it sounded like he was planning on squeezing us into a spot that wasn’t really a dock. When we got to Oakland, we tied up at the public dock and I went in search of the harbormaster on foot while Maryanne tried his phone. Neither of us had any luck. I asked around and nobody had seen him nor did they seem to expect us. As a last resort, I went to the fuel dock to see if anybody there had any ideas.

“Chris?” the fuel guy said, “Yeah, he’s right there.” He pointed to the guy behind me who was leaning with his hands on the railing looking out at an empty slip. I had thought he was a tourist.

I introduced myself. There was a bit of confusion about what exactly to do with us. Chris eventually told us to take the big double dock by the fuel dock, saying the guy who belongs there probably won’t be back in the next couple of days. Nobody else who was present seemed so sure, but we needed somewhere to go for the night, so we took it. Chris said he would try to rearrange a few boats in the meantime to get us two empty slips together.

Our position as the first boat on the dock meant that nearly everybody in the marina passed by on their way to their own boats. We were asked where we had come from and retold the story to each passer-by. Every single one of them was very nice and each one of them insisted that we join them for drinks.

We managed to hold them off long enough to get Begonia all sorted and to get showered and changed. We didn’t feel so conspicuously grubby then. The guy on the boat next door is a dentist from Monterey named Bill. As soon as we stepped aboard, he handed us each a drink and a plate. He had just made a mountain of spaghetti and told us he expected it to be gone later. We were lucky that the rest of the marina showed up as well, so we were only expected to eat a twelfth of a mountain each. It was amazing. We had a whole boat full of friendly new neighbors, each with a plate of spaghetti, and that mountain looked the exact same size. This was in spite of the fact that Bill has ninja serving skills. If you looked at your glass, he refilled your plate. If you looked at your plate, he refilled your glass. I’d be looking out the window, feel my plate get heavy, turn around and find him already gone. We got the impression this happens every night. It was all really good, too.

Keeping a trim figure around here may be more challenging than we thought.