[Kyle]It took us quite a while to extricate ourselves from our cove. The forecast was for nuttin’, so we planned to motor the entire way to the canal. We did in fact start with nuttin’, but I was soon regretting my decision not to uncover the sails and rig the boat for sailing. Oh, well. Move on!

At the western entrance to the canal, from some distance off, we could see the cut through to the Agean. Lying across the canal entrance was a bridge. Unlike other drawbridges we have seen crossing canals, this one is lowered into the water until it is submerged enough to allow passage.

The “meat” of the canal is a sharp cut through the intervening limestone, leaving walls almost vertical rising up to 79m at its highest point, Giving the impression of going through a deep gorge of beige and tan. 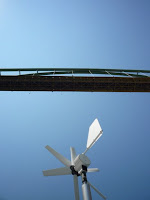 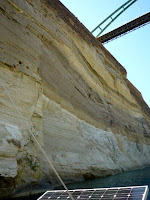 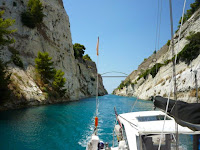 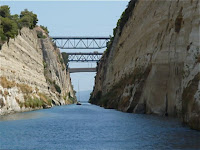 Corinth Canal
Apart from the two submersible road bridges (one at each end), there are no other intervening obstructions like lift bridges or locks. It’s just a straight cut, sea level on both sides, sea level all of the way through, yet this canal is reputedly more expensive per mile than any other in the world. Our passage cost us €133 for the 2.3 mile passage. That’s about $82US per mile. The next most expensive, the Scottish Crinan Canal, cost us £109 for 9 miles, or just under $20US per mile.

The cost of the Corinth Canal seems to be related to its historic strategic importance. The canal itself wasn’t opened until 1893, but before that, Ships were dragged across the isthmus on paved roads and rollers to save the trip around Peliponnisos. As a result, it seems the market will bear a pretty stiff fee. At least the Crinan Canal took all day, with poor Tom the Hero doing all of the work. This was over in 20 minutes.

It actually took longer to pay. When I got to the Canal office on the eastern end, I was told I would have to wait for a group of westbound boaters in a half dozen boats to pay so they could get going (the 24m wide canal is one way at a time only). He was very impatient with everybody to get going. When all of the westbound boaters had left, he got on the phone and screamed at the person at the other end. I honestly have no idea if he was angry or if that’s just what fast Greek over a bad connection sounds like. When he hung up, He was perfectly friendly to me. Footprint was the only boat that remained tied up to the quay, and we had already been through, so all sense of urgency completely melted away from the guy. His seems like a real feast or famine kind of job.

Once out of the canal, we turned left and anchored at Órmos Kalámaki, just to the north of the eastern entrance. I had originally planned to push all of the way to Athens before I went back to work, but Maryanne sensibly mentioned that we were almost certainly close enough for a bus in and we could save the cost of a week at a downtown marina.

I think it will be a long week for her. There seems to be little in the way of immediate services (we’re going to explore later). In spite of the fact that there’s really nothing here, this is one of the loudest anchorages I can remember. A major highway runs right by, which seems to be travelled by mostly unmuffled motorbikes. There are car alarms and sirens and one guy who seems to go cruising the streets all day long with a car equipped with loudspeakers yammering away about something. We don’t know if it’s political or advertising or what, but it gets pretty old pretty fast.