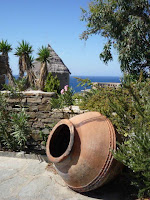 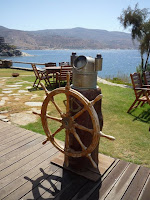 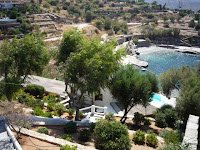 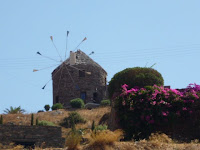 Kea
[Kyle]The diurnally backwards Meltemi made for another restless night aboard, I kept waking up in the high gusts worrying that we hadn’t applied enough backwards force to set the anchor under sail (never a problem under engine). After a second night of fitfulness we all deserved the extra sleep and we all popped our heads out of our respective cabins quite a bit after sunrise. After a quick breakfast I rowed ashore with Kate and Mark while Maryanne swam alongside us. Our dinghy is perfect for two, and designed for 3 adults max, 4 would be too much and the ideal swim conditions made it not an issue for Maryanne to follow along (rather than me make two trips).

Our plan for the brief time we had ashore was to locate a tavern that is reputed to make an excellent ouzo on site, and to buy some fresh provisions at a local store. We achieved neither! Instead we were distracted by the islands many windmills. These seem to be no longer working windmills like the wind farms that power many of the islands, but older, traditional style, classic round buildings with spoked sails, almost all of which had been converted to houses or cottages. We walked in the direction of the one visible from the anchorage, knowing from our arrival the previous night that there were several more behind. At the first we crested a hill to a view of an absolutely perfect little bay below dotted with white houses, most with the traditional Mediterranean blue shutters. Down by the water our favourite was a converted windmill below which was a clear blue pool and below that the even more tantalizing water of the bay. Along the way we continued to peer into peoples yards and homes just imagining what wonderful sites they were to live in. 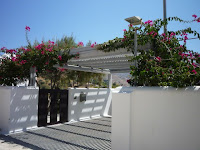 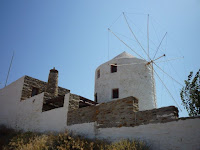 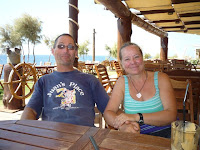 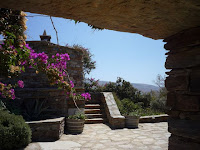 More Kea
We spotted a sign, indicating a tavern just 100m ahead, enticing us to march on in the day’s heat. What I’m sure was 100m (or more) further there was still no evidence of a taverna but how could we know for sure we’d actually gone 100m? So we continued on. We rounded a bend and found another sign (this time with no distance indicated); figuring we must almost be there we trudged further. It was fine, this gave us an excuse to descend into the pretty little bay village where we happily occupied ourselves pointing out and taking pictures of scene after scene just to pretty to be believable. At the far end of the village, on the point, at what must have been 1000m from the original sign, we eventually found our taverna. Then we figured it out; 100m was just enough to get you committed and by the time you’d walked another 100m or 2, there was no way we were turning back.

It turned out to be an excellent location, with views of the whole picture-postcard village on one side and the open Aegean on the other. The food and drink were a bit pricey (just a bit. Not too bad), but by then, we were all tired, thirsty and hungry, so they were going to get what they asked.

But with departure time imminent we really needed to get back to Footprint so we started to make our way back in that general direction. Of course this took us on a detour down to the bay, under the windmill house, where it was very refreshing to cool off by wading in the water and in such a beautiful place. Kate decided it was too good to pass up and went for the full swim; after all how often do you get such an idyllic opportunity? 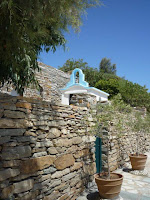 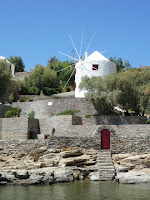 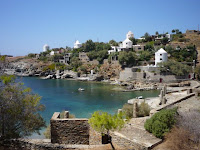 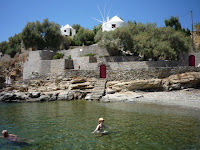 Still more Kea - kate finds the perfect pool
We arrived back at Footprint a little later than planned (and with out fresh groceries or Ouzo); everyone was great in pitching in so we could depart in time to arrive at our next anchorage by dusk.

Once again we pulled up the anchor without needing to fire up the engine, we had a beautiful fast sail down the west coast of Kea before turning cross-wind to transit the gap towards the island of Kythnos.

The sailing stated out fine (no worse than the usual rough) but as we approached Ak Kefalos at the North end of Kythnos a strong counter current required us to point further and further into both wind and seas making the ride slower and much more miserable than we would like (for ourselves and our guests!). As we neared the island it became clear the current would not allow us to clear the point on our current tack, we did an experimental tack to see if we had any chance of overcoming the current and found that we were only able to make 20° to our reciprocal course. This would have made for a very long miserable night and require sailing miles and miles in the water to clear the island. Since we were all pretty much fed up with the weather anyway, and darkness was approaching, it was time to start the motor to push us around the point.

By the time we got to the east side of Kythnos it was late enough that we kept both engine and sail for a really fast downwind segment along the coastline to our planned anchorage, and found ourselves still in increasingly windy conditions.

We finally exited the big swell into the protection of Ormos Ioannou and found ourselves the only boat anchored in a deserted cove at the head of the bay. There were no seas of any kind within the bay, but the wind was howling down the valley leading to it ensuring that the wind generator would keep the batteries topped up all night. There were a couple of farm houses ashore in which we couldn’t see any activity; apart from us the place seemed deserted. Once night fell we could see a couple of candles lighting one of the farmhouses ashore; it was the only artificial light we could see (apart from our anchor light). After dinner we all went forward and lay on the deck to enjoy the full expanse of the moonless night sky and a particularly vivid swath of the Milky Way. Sights that most people in cities are not fortunate to see very often. We retired contented with being in such a remote and special place and with good friends.
Posted by SV-Footprint at 2:12:00 PM