Greek islands of Ikaria and Fournoi

[Kyle]It was sunrise when we sailed into the lee of Ikaria and the wind died to a flat calm. Calm! I couldn’t believe it. Poor Kate and Mark. It was so calm that the sails became pointless so we stowed them and motored the length of the island towards he capital Agios Kirykos. We were now out of the Cyclades and into the Eastern Sporades.

Ikaria and the neighboring islands are former hideouts for pirates of the Byzantine and Ottoman times. More recently this is where communist sympathizers were sent (during the civil war of the 1940’s). Ikaria is named after Icarus who both attempted to escape from King Minos on wings of wax and feathers built by his father Daedalus. When Icarus ignored his father’s warnings to keep away from the sun, his wings melted and he crashed into the sea, supposedly creating the island of Ikaria. Ikaria is also (according to our trusty Lonely planet guide) the birthplace of Dionysos, God of Wine. Homer attested that the first-ever wine makers were from Ikaria.

At Agios Kirykos we found the harbor to have too much swell for our liking and only one obvious place to dock (another med-mooring), we decided to move on 2km up the coast to Thermia. The tiny harbor there was full of elderly swimmers who we gently picked our way through to tie up alongside the concrete pier in the center. Our guidebook suggested we could anchor, but it was so small it is hard to see how the local boats could get in or out if we did. There was not much to Thermia a few derelict looking buildings and a hand full of cafes. The main attraction? Spas built on thermal springs which draw an international elderly clientele to relieve their arthritis and other ailments which these thermal springs like almost all others are reputed to cure so many problems. To me it seemed the people going out were just as hunched over as the people going in but I’m sure it feels good at least while you are in there. These were extra special “radioenergic” thermal springs (i.e. radioactive) was this safe?

After tying up, we asked around the town and found that the pier was used for a ferry service expected at 5pm that afternoon – so we’d have to be clear by then. We were pretty sure we could see the whole town twice over by then. Our next planned day was a short 12nm trip so we decided to leave Ikaria by 5pm and head to our next anchorage a day early, we’d get our proper rest in then.

In the tiny harbor in the tiny town, suddenly Footprint was THE attraction. It was like pitching a circus tent in the middle of the town square, we were hard to miss, and plenty of locals and visitors came to greet us and attempt discussions in a mix of sign language and smiles. 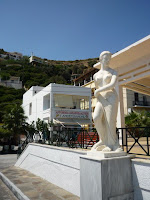 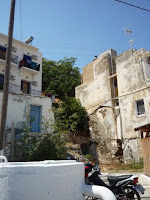 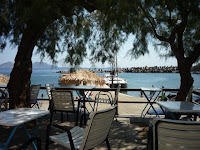 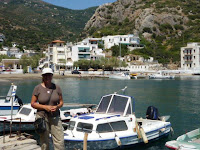 Ikeria, with a mixed messages of high end spa and communist decay
We selected the busiest restaurant for a big meal of two giant table appetizers accompanied, of course, by a jug of the local wine (which was good, and inexpensive). We walked off our lunch by traversing the 25 steps to Footprint to collect our swim and shower gear for a visit to the town’s spa.

For €4.50 we got 20 minutes in a Jacuzzi pool bubbling with the healing thermal waters, for €3.00 I added a 20 minute stint in a natural steam sauna, built into a side cave. (Further up the coast you can do almost the same for free at a local beach, but Maryanne was happy to pay the €4.50 for the fresh water shower alone after the Jacuzzi). I started with the sauna while Maryanne found a shady spot to read her book. Even after experiencing it, I’m not sure I understand the appeal of a humid room heated to 150°F in Greece in the summer! 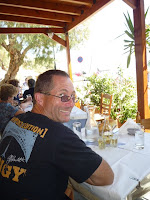 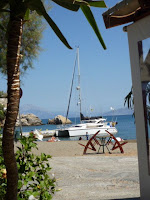 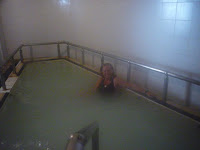 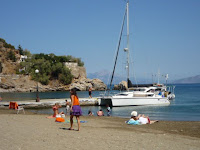 Ikatia
After spending the first half of my allotted time in the sauna alone carefully keeping track of the time for the moment when I could finally burst out into the cool air of the Greek summer I was joined by several more people. There were three women who I wish were wearing more than bikinis, happily chatting away to each other in Greek. Behind them came 4 gentlemen (complete with speedos). After a while I thought I heard a couple of words of French and one of the men asked if anyone spoke English as he was trying to find out what the time limit was. I answered 20 minutes in French at which point he asked me where I was from. I told him I was American and he immediately lit up. “You are the boat in the harbor?”. We then proceeded to have a lively conversation, all in French about our travels until Maryanne came to fetch me, concerned I was over my 20 minute stay and ready for her Jacuzzi. After a quick cold shower I was ready for the hot bath, which seemed surprisingly mild. We once again were joined by the Frenchmen where Maryanne was able to also join in with mixed French and English. They were really nice guys.

We took a final soap and water shower and returned to Footprint for our departure. The Big Top was being stowed away, our new French friends waved us off enthusiastically from the beach, wishing us “Bon Voyage”.

The wind was so light (sorry Kate and Mark) that we motored all the way to our next anchorage at the south end of Nisis Fournoi where we now had the luxury of two nights in a row to relax, sleep, and get caught up with the blog. We also set aside some time for exploring, the highlights of which were spotting not one, but two separate octopuses (octopi is not the correct plural since the octopus is NOT of Latin origin, but Greek) and a sunset walk along the road lining the bay. 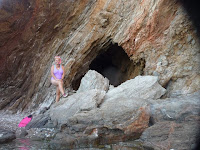 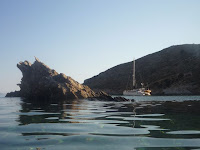 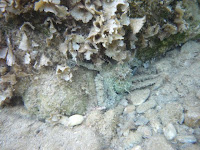 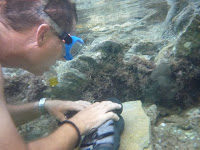 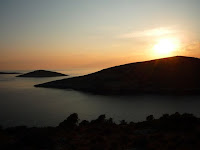 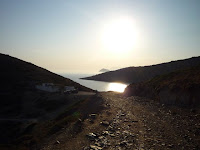 Oh, I'd have been a fan of the thermal springs spa treatment! You have to just give yourself over to the heat and the subsequent sweat. It's good for you! And where else would you want to be the center of attention as "the American boat in the harbor" than sitting and sweating with naked men you've never met before? P.S. Even though it's not of Latin origin, I'm still going to say octopi. Just to annoy you.