On to Siros and Tinos 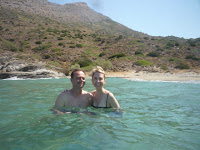 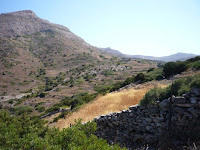 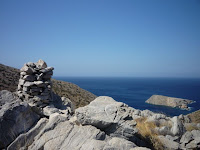 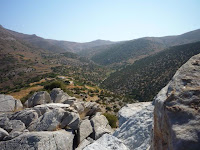 Exploring and relaxing in Siros
[Kyle]Since we’d arrived in Siros in the black of night, none of us had yet seen it fully until we emerged groggy from our berths the following morning. Wow, it was spectacular; the whole bay was ringed by steep high cliffs of tan rock and scrub-covered hill. Our cove was rock walls on two sides, with sandy beach on the third. We were all eager to make haste towards our next island of Tinos but this place was too good to pass up so we made time for some leisurely swimming. I was able to sneak away long enough to get to the top of the nearest high thing – an outcrop of rock with a cairn placed atop as a signal to me to stop climbing. I made my way back down to Footprint where we all had a good rinse before leaving for Tinos.

I explained to Kate and Mark that our 16nm passage would require the first 2.6nm to be upwind to round the island, but after that it should be a fast, cross-wind passage, with conditions improving as we near the protection of Tinos. That is not what happened.

The closer we got to Tinos the worse things got. After we rounded Ak Trimeson at the North end of Siros winds were in the low teens (great), with slightly sloppy seas, “this isn’t so bad” we thought. Kate was even sitting out on deck enjoying the views. The further we got though the worse things became. Eventually it became apparent that Kate would get a thorough drenching if she stayed there so she went inside. By about ½ way across the 19kt forecast winds were steady in the high 30’s and we were taking a real pounding again. I felt terrible for our poor friends but had the reassurance of knowing that we only had single digit miles to go and we would shortly be in the shelter of the island.

Those last 8nm ended up being about the longest I’d sailed in my life. By the time we were within 2nm of the harbor entrance the seas were no calmer, and the wind was gusting into the 40’s. I was steering while Maryanne would call out wind speeds (Mark later reported that he heard her calling out speeds of 26/27kt and thought that was what we must be sailing through. In reality Maryanne was reassuring me that the latest gust had died back down.). One gust hit us that was so bad I had to abandon our course altogether and sail straight down wind to try and minimize the forces on the sail and rig, during the worst of the wind indicator reported 48kt relative wind, and we were travelling 12.1kt in the same direction of the wind – making the true wind 60kt (that is 69mph – hurricane force winds). This is the strongest wind we have ever had underway in Footprint, it was truly terrifying, we longed to reach that safe harbour and felt terrible for our friends we'd convinced to continue the journey.

By the next appreciable lull (wind down into the 30s) we had been blown a couple of miles downwind of the harbor, I rounded up and Maryanne quickly went forward to dump our double reefed mainsail. We started the engine and began the long upwind bash the 2nm remaining to the harbor. The wind was so strong that going into it even with full cruising rpm we were only able to make a knot or 2 over the bottom and in some gusts it was impossible to keep the boat pointing straight against the force of the wind. Things didn’t actually improve until we were inside the concrete breakwater of the harbor at Tinos. The wind was still in the mid 30’s but it was smooth enough that we could set fenders and prepare to Med-moor at the dock in the inner harbor. 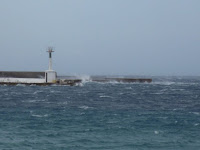 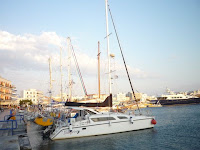 Tinos
We were anxious about the whole med-mooring procedure in those conditions but the wind was straight off the dock which made for easier manoeuvring and the inner harbour was more protected. Quite a few people were on hand to watch our arrival as we were the only boat moving about the harbour and conditions were still rough. It required all 4 of us to get safely berthed. I was at the wheel, Maryanne at the bow with the anchor, and Kate and Mark each had a stern line. Conspicuously people on several of the other docked sailboats were happy to sit and watch but offered no help (this seems incompressible in those conditions), this required Mark to take a leap of death to shore to help attach our lines through the rings. By the time we attached our stern lines to the wall our wind indicator was showing just 13kts, unbelievable. There was little sign from the square behind our boat of the violence that was occurring just outside the harbour entrance.

We encouraged Kate and Mark to escape ashore and confirm their ferry arrangements for the following day, while Maryanne and I cleaned up the mess inside the boat and completed our ‘done sailing’ check list. The med-mooring system makes a boat pretty lurchy if there’s any swell in the harbor as the boat jerks to the end of her lines. On one particularly bad lurch from a ferry wake, Maryanne fell, sending a bucket of bilge water she was heading out with all over the interior. Some of it landed on her computer. As far as we can tell, it still works with the exception of the screen. It’s a good thing we have two. She swapped her hard drive into my machine, so we’re back up and running with the blog until she can get hers fixed and I can have my hard drive back. With tasks completed, we were all ready for a grand-finale meal and big drinks ashore. We selected a waterfront restaurant from the many and were seated by an adorable waitress. As we were perusing our menu Maryanne noticed another boat arriving with crew all in foul weather gear and attempting to berth in the space beside us and sent me to help collect their lines. Every person on that boat had the same look on their faces that I imagine we all had a couple of hours before - wide eyes, wild hair and complete exhaustion. When I tossed the line back to the woman at the stern she looked like it had been the nicest thing anyone had ever done for her, but she was too exhausted to say anything, so she just gave me a weak and very grateful smile. 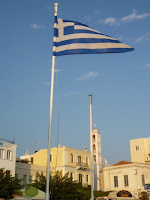 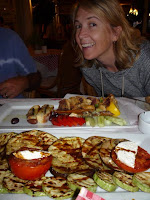 A farewell dinner in Tinos
Back to dinner! In Greece food in restaurants is served differently than in the USA and the UK. Usually you find something on the menu you like and order it for yourself. Since we were all hungry we each ordered a main course and with 3 more starters to share. I had a feeling this might be a bad idea since most of the restaurants we’ve encountered in Greece (except Athens) seem to prepare main courses to share. When the appetizers arrived on huge platters we knew we were in trouble. Then the main courses showed up and suddenly there was almost more food than would fit on the table. But this was to be our last dinner together with our friends in Greece, and we’d all just been through hell, so we were more than happy to make a long evening of it and enjoy. We washed our food down with a large carafe of pretty good local wine, and the ubiquitous bottle of chilled water. It was a great time; we were glad to finally be on shore and had a relieved sense of accomplishment from having been through the worst period of rough weather that we had seen on Footprint while not on an extended ocean passage. 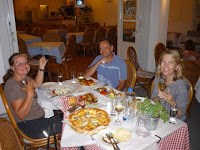 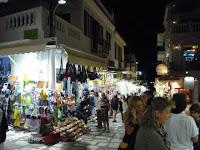 Last night in Tinos
This hadn’t been exactly the experience we had hoped to share with our friends but they were amazingly good natured and happy to stress the good times on each island, and insisted they were glad they had not left Footprint at Kythnos (I’m not sure I was glad that I hadn’t left Footprint at Kythnos!). For this attitude and their great friendship we are amazingly lucky. We somehow miraculously managed to eat almost all the food presented to us that evening and even managed to top it off with a shared bottle of ouzo to toast the trip and our friends. As we were about to settle the bill and leave the restaurant the proprietor came up and placed a dish with a tiny carafe of Rakomena (Raki with honey) and 4 shot glasses – an excuse for more toasting – wonderful. Oh boy! It’s a good thing Footprint was only across the street and we’d had plenty to eat. We managed more than that though, we walked off our dinner by joining all of Tinos in the traditional evening stroll enjoying the sights and sounds of the bustling little town before finally retiring for a good night’s rest.
Posted by SV-Footprint at 3:02:00 PM