[Maryanne]After a morning visiting the amazing ancient site of Delphi it was time to go home. We'd read about hikes in the area and had been given an excellent booklet outlining the routes at the town tourist information office. One route went from the town of Delphi down to the coast and seemed relatively easy (basically down hill for us!)... Hmmmmm... 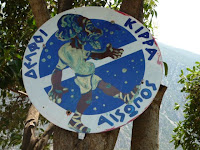 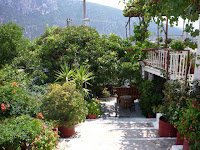 The hike begins by appearing to enter someone's back-yard
[Kyle]We decided to walk the Ancient Road of Pilgrims that took council seekers from the harbor in Itea up to Delphi and the Oracle. It was a very long walk (10.7km, 3½ hrs) in the hot sun, but at least it was downhill. As we descended, we kept imagining what it must have been like for all of the people going up over the centuries, many of whom were Kings and Emperors, with their attendant entourages. Maryanne would occasionally say, “Mind the statue!”. It was a reminder that a lot of those pilgrims were toting bloody big statues as gifts for the Oracle. We couldn’t imagine being some poor slave, whose lot in life was to carry as his portion 150 lbs. of some giant unwieldy statue up that steep, hot hill. Woe to the poor soul who breaks a finger off of the statue on the way. Mind the statue indeed. 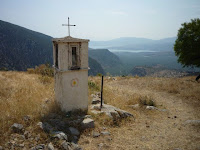 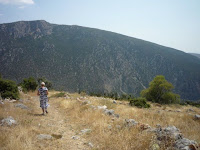 So.. we just have to walk from here, to over there where the water is?.. Best get going
The walk turned out to be pretty brutal. Once we lost most of the elevation, we still had a long walk to the sea. By the time we got there, we were limping as much as walking. This trail was supposed to involve suffering, right? We got to the bus station and found out the next one to Galaxidi was in two hours. We limped our way to a mediocre waterfront restaurant and tried somewhat successfully to kill some of the aching with a jug of local wine along with our dinner. Maryanne, being a bit more adventurous than I am with food, had a plate of “baked arrogants”. It turned out to be little sardine-like fish. 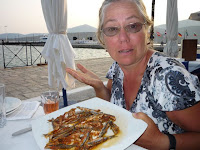 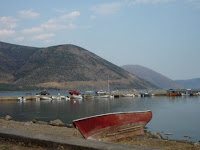 Maryanne attempts to look arrogant to match the mis-translated fish dish, and Kirra harbour the official end of the hike (although we still had to continue an extra mile to Itea for the bus)
We got the bus back to Galaxidi and I limped Maryanne back home. The next morning, we both woke up stiff and sore, but Maryanne had suffered much more. In addition to what ails me, she also ended up with second-degree sunburns on her ankles. Every time she tries to stand, the blood rushes down, tightens the skin and causes her enough pain to make sure she stops trying that. Even though she’s only slightly creaky from the walk, the burn has made sure she doesn’t get up to much today.

[Maryanne] The hike back was an unplanned one. I realized soon into the hike that I was not sufficiently protected, but by then it seemed it would take just as long to walk back as to keep going. Although my arms and face were fine, and I had a long-ish dress on, the bottom of my legs (above my sock covered ankles) caught the brunt of the sun and will enforce shade and a rest for a few days from any major activity.

The walk guide was for the route up-hill and estimated to take 3 hours. Since we were going downhill, we figured probably 1 hour, but maybe 1.5 hours. This estimate of ours was woefully wrong and we ended up taking almost 3 hours to get down (and from the views from the top we really should have realized that!). 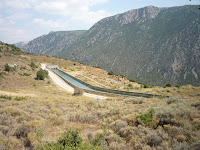 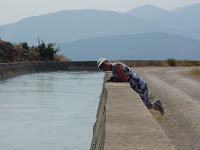 Somehow we have to cross this - the canal that feeds the water needs of Athens
Having said that, the walk was stunning. It took us past churches from all ages, the main canal that feeds water to the capital of Athens, ancient almond and olive groves and eventually streets lined with lime trees, and an ancient lighthouse. I was tempted to pick from wild fig trees but need to understand how to know when a fig is ripe first (doh!), I’ve never actually eaten a raw fig (as far as I can remember) so I’m not sure what to look for. Our good friend Kate in the USA is busy harvesting her own figs right now so they ought to be ready here too? But they didn’t look or feel it (what do I know?). Once in the valley floor we walked for 4km through olive groves and I was amazed to see some of them sat in flood water. On more careful observation we realized that there was a deliberate earth bank around each gridded patch of olive trees with gates and water piped to assist with flooding – so it must be part of the expert olive growers arsenal for the perfect olive. So much to learn. From the top of our walk as we looked down on the flat valley floor of green, it seemed easy to imagine giant animals walking through (I kept a look out for Giraffe, or even some dinosaur, each seemed equally likely in the prehistoric scene). Luckily nothing came to devour or pester us. 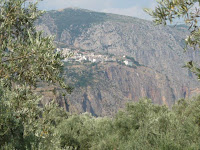 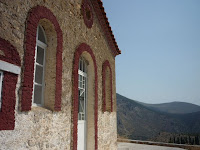 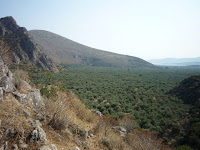 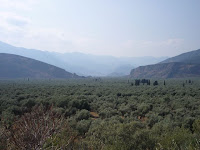 Views from the walk - it WAS magnificent
Posted by SV-Footprint at 9:53:00 AM

hey guys! oh maryanne, Ouch! my last sunburn was last summer, also on the bottom half of my legs (which swelled up a bit), but yours sounds a lot worse. i'm glad you're taking it easy today - anything on board to soothe it, e.g., aloe vera or such? as kyle said, though, the upshot of the strenuous hike was that it afforded gorgeous views and tons of history - so jealous!!! kyle, a fig (have no idea what variety you may have seen - i couldn't even tell you what ours are) is generally ripe when it takes almost no effort to pick it (the trick is getting to it before the birds do). it will certainly yield to your touch, and in my experience if it's wrinkled it's been on the tree a bit long. some varieties remain green when ripe, ours darken and i prefer them as ripe as possible because they're even sweeter. some figs are enormous! ours are small enough you can pop it in your mouth all at once - two bites if you're feeling dainty. don't be afraid next time - you won't be disappointed! here's a site that may prove helpful: http://www.adrianosfigtrees.com/varieties.html

Yep, several days later I still have a couple of pretty large blisters on my leg just above the sock line. Doing everything I can to keep out of the sun, while wanting to be in the water to keep cool (resorting to wearing bandages and socks - so great is my dress sense!).

I will keep looking out for figs that seem wild, but now I think we are in too built up an area and every fig tree we see will belong to someone... I guess I should keep an eye on the grocery stores too. :-)