An extra day in Kythnos 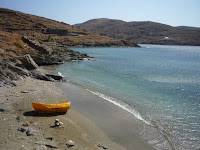 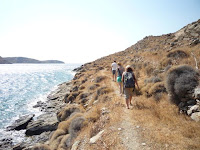 Dinghy ashore and Hike to the nearby village
[Kyle]In the morning over breakfast and a new forecast we decided our plan for the day was to figure out how to get Kate and Mark home from Kythnos if the afternoon forecast was not significantly better for our passage to Syros. This started with a row to shore (this time taking two trips so everyone could stay dry), and then joined the goat trails across a series of hills for the 40 minute walk to the nearest town of Stefanos (unfortunately its harbor had been full the previous night). 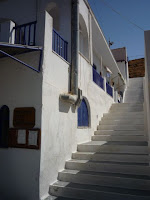 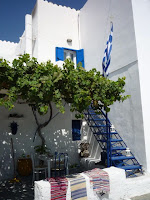 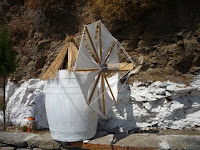 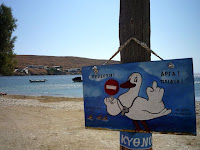 Pretty village of Stefanos
Stefanos was another pretty collection of about two dozen buildings centered on a little bay. We explored and took pictures at a meandering pace. At the far end of the town, in the ‘burbs, we found a tavern and settled in for lunch and to try and get some information on how to get across the island to the ferry port (the town of Merikha). We had a delicious lunch in a beautiful setting; we all agreed the best Greek food so far. Maryanne heard someone at a nearby table speaking English and went over to ask them if they knew anything about the ferries and transport across the island. It turned out they lived there for part of the year and were a great source of information. We sorted out escape plans for Kate and Mark, and set off back to the boat for a last check of the weather (and retrieve bags as necessary). 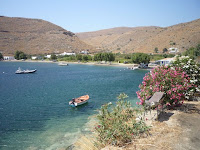 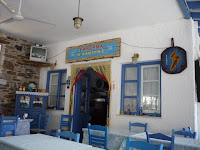 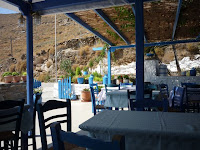 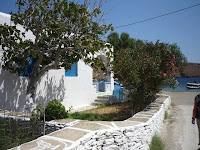 A lovely meal in the taverna of Kynthos
It was sad for me thinking that they would be leaving a couple of days earlier than planned and expected. One particularly tough moment for me was when Kate found a picked a ripe fig from a tree (she has a fig tree at home and we’ve been gleaning information from her regarding how to tell when they are ripe etc.). She seemed so pleased and I realized that there was soon to be no more shared experiences for the four of us. I tried my best but my heart was heavy for the journey back to Footprint. We had asked around at Stefanos to see if we could find someone to act as water-taxi back to Footprint and thus saving us the walk, but we’d had no luck; we trudged back home via the familiar goat path route.

To save the two long trips, once we reached the dinghy Mark hiked along the shoreline while I rowed Kate and Maryanne towards Footprint. With me rowing in the dinghy and Mark picking his way across rocks and prickly bushes we were about equal in progress towards Footprint until I suddenly spotted a turtle surfacing for air. I stopped our rowing and waited for it to surface so Maryanne and Kate could also see the old mariner; eventually he did surface but just briefly until their squeals of delight caused him to dive back below the surface.

As we were making plans to take Footprint around to Stefanos to drop off Kate and Mark with their bags, I checked the latest forecast. It seemed much better, but I was still wary of trusting it. I had so little faith in the forecasts, but also wanted to believe it so we could continue on with our friends. I was worried that if it did end up being bad again and they missed their chance for a way out, everyone would think it was my fault and so I was reluctant to discuss the new improved forecast. It felt like everyone else was already on the path of getting our friends off Footprint and I no longer felt a right to a say in the matter. It was heartbreaking watching them pack. I could not take it, so I busied myself on deck trying to distract myself but it didn’t work.

After I’d taken too long over a minor task Maryanne sought me out and asked me what was wrong. I told her I really did think the forecast was acceptable and I hated the idea of our friends leaving only to hear reported in the blog that we had had a wonderful time in the places they were supposed to have been sharing with us. Maryanne grabbed me by the hand and took me to the cockpit where she sat me down and insisted I explain all this to them. They listened attentively and to my surprise and great relief agreed that we should at least try the passage to Siros; if it didn’t work we could always return and drop them off at Stafanos the following day. We promised to give them vito power to turn Footprint around if either of them didn’t want to continue. After so many rough passages and anchorages, we were amazed that they were willing to expose themselves to more rather than jump ship early and have a leisurely last few days in Greece free from the dictates of the winds.

We left at sunset to ensure the passage to Siros was in the lowest of the forecast winds. It turned out all right; for once the winds were as forecast. We had a fast and not too uncomfortable reach and were pulling into the anchorage at Siros after only 3½ hours. The anchorage I’d selected, Ormos Aetou, turned out to be less populated than I expected. The entire bay was just a black wall obscuring the stars. We felt our way in with radar and spotlights. I had originally planned to anchor in the North cove, which our guide advised required a line ashore as there was no swinging room. We inched our way in to check it out and confirmed that the rocks were far too close to allow for any swinging room. I wasn’t in the mood to swim in the dark so we backed out and headed to the larger but less protected cove to the East. Inside the cove the wind was completely blocked by the surrounding cliffs, but the large swell was still making its way in. We set the anchor in good sand and toasted our arrival before another night of terrible rolling and more fitful sleep.
Posted by SV-Footprint at 2:38:00 PM