Looking for a bus stop

[Kyle]Well, we screwed up. Due to a slight miscommunication between us, we ended up anchored in completely the wrong place. When Maryanne had suggested that we anchor near the canal rather than pay for a week in Athens, I assumed she meant Órmos Kalámaki. She had meant Corinth at the other end, but hadn’t realized we weren’t there until we got here. Since then, we have figured out that everything useful is on the other end of the canal in Corinth. Now that we’re here, we can’t get back there without forking over another €133 each way. Fleh.

Here’s how our day went:

We headed off in the direction that looked like it might be the local town center. “Town”, as it was, ended up being a mini-market frequented by a handful of people who were very nice and helpful. They explained to us that there was a bus to Athens, but were a bit vague on the time or place to intercept it. I really need to know that.

Looking for something a bit more solid to pin my hopes to, like an actual bus stop, preferably with a posted schedule, we meandered back in the general direction of the boat along a gravel back road overgrown with tinder-dry vegetation and sided with occasional mini-dumps of garbage. There were a couple of nice houses along the way, but most of them looked like formerly grand houses that were now occupied by squatters, or perhaps the tenants were getting too old to keep such large places going any more. 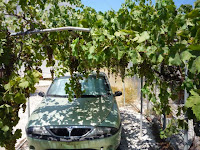 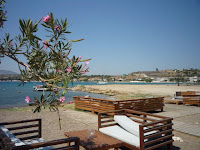 Our current home town
We passed the spot where we left the dinghy and headed towards the canal, hoping the tourist center there would bear more fruit than our local mini-market. We followed the curve of the beach around until we arrived at the submersible bridge, which was down. We decided rather than wait the 20 minutes reported, we would see if we could follow the northern edge of the canal to the high central bridges, which looked from a distance like a giant truck stop. 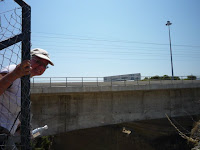 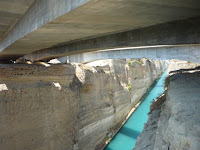 The very unofficial path to civilization
It turns out there is no path per se on that side. Our route started off harmlessly enough, with a shade-less climb up a disused road, but quickly degenerated as we went along. Our road ended and turned into a mini-dump lined path that gradually got narrower and narrower. At the big freeway, rather than risk going across, we took a path that dove under the canal bridges. This gave us great views of the canal, which was a long way down. By the 3rd bridge our trail was looking more like a goat path on the outside edge of security fencing (very little path with a huge drop on one side). It was clear by then that we were not supposed to be here {Maryanne: I was suggesting this much earlier, but now Kyle couldn’t deny it}, but we didn’t like the idea of turning back when our goal was in sight, so we pressed on. We made it back to civilization by swinging over the canal end of the last post on a security fence, feet inches from the giant drop. Looking back over where our path had taken us a sign was posted and despite being in Greek, clearly said no-entry, area under video-surveillance. We hastily pressed on towards the tourist buses and a crowd in which to blend. A block or so later we arrived at the 3 road bridges (this time with purpose built pedestrian walkways across the canal).

On each side of the road and on either side of the canal there were souvenir shops, cafes and fast food restaurants serving the throngs our tourists arriving by car and tour bus. Most of the people visiting found a place on one of the three walkways spanning the canal taking photos of each other with the deep canal cut as a memorable backdrop. In addition to the grandeur of the canal itself, the spectators were being entertained by the sight of bungy jumpers leaping off the catwalk below the walkway of the westernmost footbridge. Being a huge fan of bungy jumping I had already planned to partake myself (how could I not?) but I found myself here a week early and Maryanne recommended we could save an extra trip by getting it done today. Hmmmm. 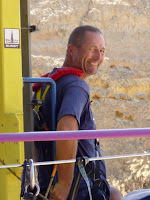 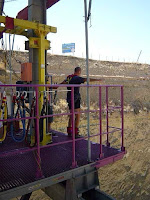 Right before the jump
The line of jumpers had thinned out by the time I’d finished the preparation briefing, so as soon as I was rigged up with all the safety and attachment gear Maryanne and I went directly to the platform where I was positioned on the jump platform and attached to yet more safety gear. Having being in this position more than few times before I was less nervous than even I expected – right up to the point that they began the count down and I would be expected to ACTUALLY leap. That is when the instinct to avoid (at all costs) falling from such high places kicks in with the adrenalin, well for just a second. I did leap, and as always it was wonderful. I didn’t pull any tendons, my back doesn’t hurt, my eyes never popped out and I didn’t have the slightest urge to even throw up. Forgive me a moment on the soapbox but I heartily do recommend the experience to anybody (who is not pregnant or with a heart condition or any of those many other ailments on the extensive waiver you are obliged to sign before jumping). I still can’t convince Maryanne to do it though! 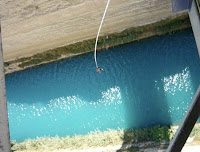 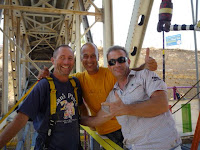 Safely done - we were very happy with the friendly team at Zulu Bungy!
There were a couple of things different about this jump (from the others I have done). One is that they use a full harness which is much more comfortable than the standard ankle clamp. The other was that rather then being lowered to the water (and an awaiting platform) after the jump, here I was hoisted back up. I know I should be going on and on about what an awesome adrenalin rush the jump was (and I could), but the part that was most fun for me was after all the bouncing had stopped and I had 2 minutes before they sent down the hoisting line. Here I found myself sat in the harness in the exact center of the canal (half way between both the sides and also between the water surface and the cliff top) the view was magnificent; all I kept thinking was I wish I had the camera. I joked to Maryanne to toss it down to me, but clearly being the more sensible one she declined. 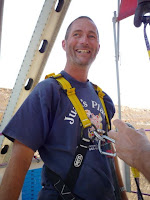 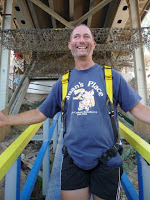 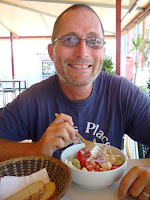 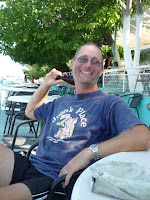 Kyle all smiles, on a high for quite a while after the jump
All smiles after being hoisted up we shared a congratulatory cafe lunch and resumed our search for a bus stop. We had vague directions from a few people who indicated which side of the canal to look, and that it was by a supermarket. We found and made use of the supermarket, quickly distracted by the vast selection of items on our to-purchase list almost as much as the copious air conditioning. We left the store laden and realizing we still hadn’t found the bus stop. A few enquiries later we located the bus station where I was able to even get times from a guy at a desk behind a piece of glass – he looked very official to me.

Mission accomplished we started an alternate route home (down the southern side of the canal which did have a trail in the form of a disused and old road). Soon the groceries seemed even heavier and the shade-less heat was really starting to get to us by the time we arrived at the Canal’s eastern end’s submersible road bridge. The digital road sign at the bridge indicated it would be down for another 13 minutes. This time, rather than engaging in another wild goose chase, we popped into the handily placed tavern to while away our wait in the shade of the verandah with a cold beer while watching the canal traffic of mega-yachts. 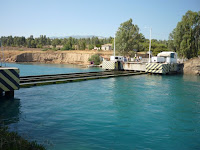 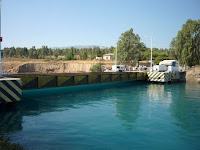 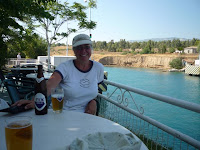 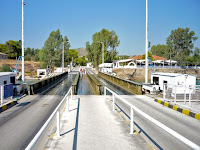 Finding an excuse for a cold beer; waiting for the bridge to raise before we can cross for home!
Back in the sun with our heavy bags, the long sweep of the bay to where our dinghy was moored seemed like a real trudge indeed. By the time we loaded the shopping into the dinghy and rowed to Footprint the only thought on either one of our minds was to strip down to swim wear and jump into the water for a cooling swim. That really does stake the sting of the heat at the end of the day.

ooh, you guys know how to whet a gal's appetite - i'm really looking forward to cooling off in that water! glad the bungee jump was so much fun. i admire kyle's style, but i don't know if i could do it - although the view did sound spectacular! we are counting the minutes and can't believe we'll soon be in greece with you :)