A couple of days of resting (OK, mostly loafing)

[Kyle]I had planned the day after the epic Delphi trip to be a low-key, just Galaxidi day. As you could imagine, after the previous day, it was even lower key than that.

[Maryanne]Galaxidi is a beautiful Greek village built on a hill, with winding cobble streets and small local shops and restaurants, every street seems a picture. There is also a renowned nautical museum that we were hoping to visit on our spare day in town... of course none of that was now possible since I could hardly stand with my sunburnt leg, let alone walk! I sent Kyle out for an explore and a few chores, primarily to gather some photographs of the streets we'd explored on arrival. 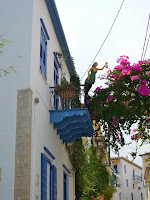 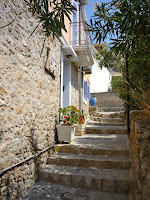 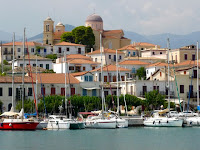 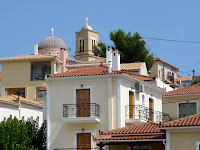 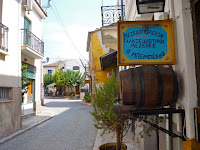 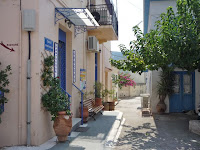 Galaxidi town
[Kyle]Once we emerged from the boat, a Northern Irish couple in the boat “Cool Runnings” (Peace be the journey) next to ours, on hearing that we had walked from Delphi to Itea, assuming we would be stiff and miserable, couldn’t do enough for us. They had gone to Delphi the same day on the 10:00 bus and were back on board by 5:00. Every time they left their boat for anything, including a trip on foot across town for groceries, they offered to pick up anything we needed along the way. We didn’t need much and I didn’t want to put anybody out, so I politely declined.

For the rest of the day, Maryanne mostly stayed on the boat with her leg on ice while I wandered the town for photos and running a few errands. Later on, Maryanne managed to get up on her feet and the four of us went out for a nice dinner and to swap stories.

We were both up early the next morning. We both had long days planned, but since our anchor chain was lying over theirs, we had to be the first to leave.

The days sailing wasn’t much. The wind had been forecast out of the north-northeast at 5-7 knots, so we were doubtful we’d get in much sailing. Leaving the Gulf of Itea, the wind went from 3 to 25 knots within about a minute. I figured it was a local phenomenon related to the high peak we were under and forced myself to resist the urge to put up sail until we were clear of the point and the wind calmed down.

Once clear, the wind did die down to about 10 knots, where it seemed to level off. We shut down the engine and hoisted sail. After two miles of great sailing, the engine was back on again. The wind was gone. A little later, the wind came up again. I decided to play it cautiously and motor-sail for a bit, gradually bringing back engine power until I was sure the wind was really staying. It did this time, so we shut down the motor again, relieved to be free of its din for the rest of the day.

0.3 miles later, there was no wind. Ugh! We fired the thing back up and I told myself that no matter what the wind appeared to be doing, we were motoring the rest of the way. I was never forced to test my resolve as it stayed less than 1 knot for the rest of the day.

I had originally planned to anchor at Ormos Áy Ioánnou on the northern side of the gulf in the islands well to the north of the western entrance to the Corinth Canal. As we weaved our way in through the barren landscape from the open gulf, there was very little sign of human habitation apart from a couple of fish farms and a lone house in the distance on a rocky hill. Our Greek Waters Pilot said the anchorage in question was near a village. We could see no village. There were a few very pretty coves, but no village. We pressed on.

Once we were very close to shore, a ridge fell back to reveal a tiny harbor with space for only a couple of boats surrounded by a “village” of about a half-dozen ramshackle buildings. A group of people that looked like a family was splashing around in the harbor, cooling off in the afternoon heat. I suddenly felt like we would be very conspicuous charging in and plopping down anchor in the middle of their pool. It also seemed like the kind of place where we would feel obligated to go ashore and eat in the local taverna for dinner.

Not wanting to be under the watchful gaze of a whole village, we left to search out somewhere more secluded. We found a perfect little cove a couple of inlets down. It was tiny, with barely enough room to turn Footprint around while avoiding the cliffs on either side. We nudged in through the turquoise water as far as we could without actually beaching the boat. The water was still very deep – too deep for the swinging room the cove allowed. We were really taken with this cove, though, so we decided to set the anchor in the really deep water outside the cove and then back our way in on a very long rode. Maryanne held the boat in position with some engine reverse against the pull of the rode while I swam a long line ashore to a modest sized boulder that still must have weighed more than Footprint. I swam to the anchor, which was too deep to reach, but I could get within five meters or so, which in the clear water was close enough to tell it was set. We cinched down everything until we were fixed in place, just like being med-moored to a dock. 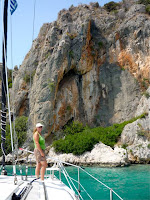 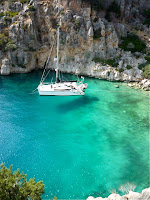 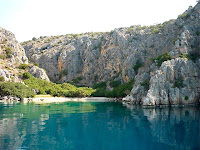 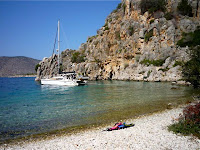 Home for a day of tranquillity... beautiful
Our cove was the epitome of perfect isolation. It had no trails or roads leading to it. Footprint was surrounded by hills for 281 degrees, with a 79-degree view of the open gulf (I actually measured this). It was our own private place in the world.

We spent an extra day there. Depending on whether I’m wearing grippy shoes or fins, I alternately think I’m half goat or half fish. This cove was my own private amusement park. I swam to the beach, where I switched to shoes. I would then climb the rocks to my heart’s content, looking for places to take shots of Footprint from altitude. When I had my fill of climbing, I would find a high outcrop, where I would jump back into the deep blue water. Then I would swim to the beach, where I would pick up my fins and take the form of an ungainly fish.

Our cove seemed to be filled with a high proportion of small to medium-sized fish populating the medium depths along the cliffs plunging down into the blue void below. The water near the shore seemed to be fed by a source of cold water. There were many places where the water temperature would change by ten degrees or more. This would cause thermoclines, which would cause the water to shimmer and blur like the space behind a jet engine, occasionally clearing to reveal the scene behind. I would explore the cliffs and caves for a while until I was cooled off, then I would repeat the whole cycle. It was nice to have a day with no itinerary.

Wow! What a beautiful spot!! I could imagine spending weeks here - thanks for sharing.