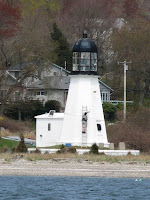 [Kyle]Well, that tears it! We almost had to share an anchorage with another boat this weekend. This place is getting too crowded. Time to think about moving on.

I came back from work after a week of beautiful weather and was astonished at the change since last week. It appears that most of the marinas here are equipped with hydraulic jacks that can tilt one side up and slide the boats into the water like a dump truck unloading dirt. When Maryanne and I arrived from Norfolk two weeks ago, Footprint was the third boat tied up in the entire marina of maybe 300 slips. The place howled with the emptiness of a ghost town. Now the place is already maybe half full. The parking lot, where the boats are stored in the winter, is just crawling with people doing all sorts of industrious boat things. Every boat in the yard has a car parked next to it. Dickerson's Marina has boat launching down to a science, launching 5 or 6 boats an hour all day long, all with only one lift. Other places I have been to would have struggled to get in that many per day, maybe realistically half what with lunch and breaks and all. Their industriousness is really impressive. Even the lighthouses are getting ready for the season.

Maryanne has this long standing joke where she will appear to be helpful by shouldering more than her share of the load out of apparent courtesy, then we'll come into view of the public, her carrying four heavy grocery bugs in each hand and me standing there looking stupid holding my dixie cup and then I'll realize I've been had again. She never tires of that one and I always fall for it. This weekend, before going sailing, we needed to move Footprint to another dock so that we could pump out our holding tank.(picture below) This time I was in on it. Maryanne expertly got us from one dock to the other, which was made more difficult by the fact that we were tying up on the port side, which you can't really see from the helm. She did all of the line handling and the maneuvering, all very smoothly and calmly, to the appreciative ohhs and ahhs of the locals while dixie cup guy just sat there enjoying the view. They did see me do the dirty work with the holding tank, though.

Our first day we headed to Wickford for dinner with our good friend J.D. from Virginia. He was on a business trip in Connecticut and was good enough to drive all the way out to see us. He is such a sweet and lovable guy and dinner was filled with stories and laughter and I think we all hated having to part ways so soon. When we tried to leave Wickford, I was untying the boat when a local came up and threatened me. I tried to get the boat untied quickly but my fingers were just not fast enough to evade the snapping bill of a Swan that was being pretty territorial about the cleat to which the line was attached. I doubt the Queen would have approved. (In the U.K., all swans are owned by the Queen.) Maryanne brought out some crackers and the hissing beast became as gentle as a kitten and very delicately took one from Maryanne's hand as I untied us and got us free. What a racket!

The weather was a little cold but we had a beautiful day tacking up the bay to the Saskonnet River, where we turned downwind and rode the following current to the anchorage past islands and houses with big green lawns and trees that are just starting to bloom.

Our next day was cloudy and drizzly and windless, We had intended to motor until the wind picked up but eventually, we could see the dock and realized that wasn't going to happen. We saw one determined ketch with all sails up that made it about 100 feet in the half hour we were rooting for him. We tried using our fish finder to find dinner but so far, no luck.
Posted by SV-Footprint at 7:37:00 PM