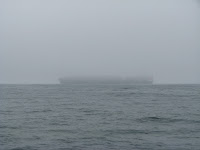 [Kyle] By the third morning the wind had decreased to the point that it became hard to even keep the boat moving, particularly in any specific direction. Ordinarily I would be more than patient enough to wait out a day of calm winds. I detest using the engine unless it's clear that I have no other choice, such as when doing multiple 180 degree turns in a crowded marina or when going dead upwind in a channel that is too narrow to tack. In this case, however, I was running out of time to get to work and we needed to get as far North as we could before the wind returned. The windless night and the cloudy days also meant that our solar panel and wind generator had not been able to keep up with the boat's electrical load and we were in need of some battery charging. I reluctantly started the engine and we started moving Northeast toward Rhode Island.

As the day wore on with no wind, the seas decreased until there was nothing but a long, barely discernable swell on a glassy surface. We were visited several times by pods of dolphins who seemed to race at us from the horizon as soon as they spotted us. Some were very vocal and squeaked and twittered the whole time. Others would just bunch up under the bridgedeck between the hulls as if they were trying to see how many could fit in the shady spot underneath the boat. The video below was the last pod of this day, characterized by the one dolphin at the end who seemed to enjoy flying through the air more than being in the water.

As night fell the fog came in again and was thick enough that a flashlight beam only penetrated about a boatlength. The bows could be seen from the helm but not clearly. The masthead tricolor light caused a weird multicolored glow to surround the boat. I noticed two vessels altering course around us on the radar. The picture above is of the bottom half of a ship that passed us with its bridge in the fog. Maryanne had one come close enough that she could hear their fog signal. We never saw any hint of them visually. I've said it before but in conditions like these, the radar and the automatic fog horn seem like the best things we ever equipped the boat with.
Posted by SV-Footprint at 9:32:00 PM